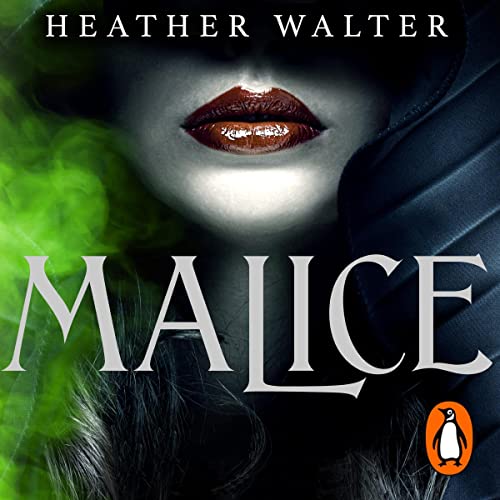 The princess isn't supposed to fall for an evil sorceress. But in this darkly magical retelling of Sleeping Beauty, true love is more complicated than a simple fairy tale. Perfect for fans of Naomi Novik and Holly Black.

Once upon a time, there was a wicked fairy who cursed a line of princesses to die, and could only be broken by true love's kiss. You've heard this before, haven't you? The handsome prince. The happily ever after.

Let me tell you, no one actually cares about what happens to our princesses. I thought I didn't care, either. Until I met her.

Princess Aurora. The last heir to the throne. The future queen her realm needs. One who isn't bothered that I am the Dark Grace, abhorred and feared for the mysterious dark magic that runs in my veins. Aurora says I should be proud of my gifts. That she...cares for me. Even though it was a power like mine that was responsible for her curse.

But with less than a year until that curse will kill her, any future I might see with Aurora is swiftly disintegrating—and she can't stand to kiss yet another insipid prince. I want to help her. If my power began her curse, perhaps it's what can lift it. Perhaps, together, we could forge a new world.

Nonsense again. Because we all know how this story ends, don't we? Aurora is the beautiful princess. And I—

I am the villain.

Switch between reading the Kindle book & listening to the Audible narration with Whispersync for Voice.
Get the Audible audiobook for the reduced price of $11.99 after you buy the Kindle book.
Learn more about membership
By completing your purchase, you agree to Audible’s Conditions Of Use and Privacy Notice.
Sold and delivered by Audible, an Amazon company

4.6 out of 5 stars
4.6 out of 5
858 global ratings
How are ratings calculated?
To calculate the overall star rating and percentage breakdown by star, we don’t use a simple average. Instead, our system considers things like how recent a review is and if the reviewer bought the item on Amazon. It also analyses reviews to verify trustworthiness.

Grim Reader
5.0 out of 5 stars A new favourite
Reviewed in Australia on 19 April 2021
Verified Purchase
Loved it! Could not put it down. I really enjoyed the pacing, the world and the characters. My only dislike is that I have to wait for the next book!!
Read more
Helpful
Report abuse

Belle
4.0 out of 5 stars Great book
Reviewed in Australia on 10 May 2021
Verified Purchase
This was a really good book. I felt as though the ending became rushed at stages, but it made sense and was written well
Read more
Helpful
Report abuse

K Huskić
4.0 out of 5 stars Enjoyed this one!
Reviewed in Australia on 13 April 2021
This book ended up being nothing like I thought it would be, but I really enjoyed it!

Alyce was the villain in the story, and though you usually wouldn't side with the villain, I actually felt for her, and really liked reading the story from her viewpoint. She wasn't as awful as people initially thought, trying her best to improve her skills and abilities, and growing more of a conscience as the story went on.

I did like this play on Sleeping Beauty - a bit twisted, but also intriguing. I would love to know what happens next!
Read more
Helpful
Report abuse

Neen Cohen
5.0 out of 5 stars True Wicked Vibes
Reviewed in Australia on 12 September 2021
This book is just everything.
Heather Walter has turned a fairytale I was completely ambivalent to into my favourite fracture fairy tale I’ve read so far.
Writing is beautiful, characters are dynamic and interesting, the world building is *chefs kiss*, and Alice is so relatable.
The feels in Thai book left my fingers trembling at the end.
Bring on Book Two!
Read more
Helpful
Report abuse
See all reviews

Books4women
5.0 out of 5 stars Unexpected and Utterly beautiful!
Reviewed in the United Kingdom on 4 September 2021
Verified Purchase
I felt drawn to this book when I saw the cover.
It enticed me and lured me in and I'm glad I did.

I love speculative fiction and re-tellings and am a huge fan of Anna Burke, so this had big boots to fill.

I'm so glad I read this.
It has everything you want in a good read and great story.

The writing was exquisite, the plot excellent, the characters and world building fantastic.

Alyce had such depth and complexity that you felt every harsh word or wicked deed done, deep in your bones.

I was utterly enthralled from the start to finish and had trouble putting this book down (to sleep).

It was dark, it was light and everything in between.
It lifted me up and brought me tearing down time after time.
I haven't felt so many raw and turbulent emotions in a book for quite a while. Unexpected and utterly beautiful.

Just one small gripe - the long wait until the next one.
Read more
One person found this helpful
Report abuse

CBARR
5.0 out of 5 stars A fun fairytale
Reviewed in the United Kingdom on 12 July 2021
Verified Purchase
I've really enjoyed this. Magic systems clever, characters are well thought out, and the world building was exactly what a fairytale should deliver. I'm very excited for the next book. It is also really well written, and pretty tight in terms of pacing and development. Only a few roll of the eye moments where I wanted to shout at the characters, but I think that comes with the fairytale setting.

Also, if Disney wants to do reimagened fairytales by retreading its animation back catalogue this is exactly the sort of story they should have being telling. I'd suggest get this and just imagine it's classically animated and it becomes the Sleeping Beauty remake that should have happened.
Read more
One person found this helpful
Report abuse

JB22
4.0 out of 5 stars Captivating
Reviewed in the United Kingdom on 27 January 2022
Verified Purchase
Wow, I wasn't expecting to enjoy this book as much as I did!

It had a fantastic slow burn between the main characters, whose lives were filled with twists and turns, I liked the fact not everything was so black and white, there were grey areas that made this book so Intresting.

It was one hell of a ride and the ending left me wanting more, I honestly don't have a clue how the next book will play out after reading this, I don't know if my poor heart can take anymore.
Read more
Report abuse

jess roe
5.0 out of 5 stars Hangover will be severe!!!!
Reviewed in the United Kingdom on 14 June 2021
Verified Purchase
It broke me... I don't even have the words to describe how much of a roller coaster this sent me on and how it ended broke my heart. I haven't realy had any interest in retellings but this is one I have to recommend to everyone wholeheartedly. Heather Walter has done an amazing job taking a classic fairy tale and making it not only modern but valid. Points of how vain and corrupt the world can be and how bigoted some people still are and yet how love tries to triumph.... how the world can make a villain and then be surprised by the outcome..... amazing read. Warning.... can cause hangover. How long until the next one??
Read more
Report abuse

Robyn Moran
5.0 out of 5 stars Highly recommend!
Reviewed in the United Kingdom on 14 April 2021
Verified Purchase
Sleeping beauty with a spin, and we don't have the sleepy, damsel in distress Aurora needing a man to save her with a kiss, she stands on her own even as death looms over her. Alyce is a character you can't help but relate to - Not bad, not good, just a person who is fed up with the world and like all of us just wants to be loved.

Very enjoyable read and I've already raved about it to my friends!
Read more
One person found this helpful
Report abuse
See all reviews