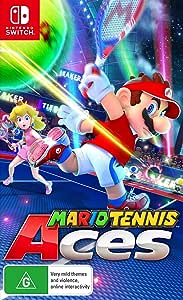 A new Mario Tennis game is bringing a new level of skill and competition to Nintendo Switch. Mario steps onto the court in classy tennis garb for intense rallies against a variety of characters in full-blown tennis battles. New wrinkles in tennis gameplay will challenge your ability to read an opponent's position and stroke to determine which shot will give you the advantage. And this time the game adds the first story mode since the Mario Tennis game on Game Boy Advance, offering a new flavor of tennis gameplay, with a variety of missions, boss battles and more.

The Mario Tennis game is bringing a new level of skill and competition to Nintendo Switch. Mario steps onto the court in classy tennis garb for intense rallies against a variety of characters in full-blown tennis battles. Wrinkles in tennis gameplay will challenge your ability to read an opponent's position and stroke to determine which shot will give you the advantage. And this time the game adds the first story mode since the Mario Tennis game on Game Boy Advance, offering a new flavor of tennis gameplay, with a variety of missions, boss battles and more.

4.2 out of 5 stars
4.2 out of 5
53 global ratings
How are ratings calculated?
To calculate the overall star rating and percentage breakdown by star, we don’t use a simple average. Instead, our system considers things like how recent a review is and if the reviewer bought the item on Amazon. It also analyses reviews to verify trustworthiness.

Matt
4.0 out of 5 stars Tennis Match is fantastic - everything else, not so much.....
Reviewed in Australia on 22 July 2018
Verified Purchase
For the tennis play itself - it is a fantastic game. However,there are just some minor let downs if you compare it to previous Mario Tennis series.

For starters - the options have been stripped when selecting a quick game. You have to go into a fiddly menu and eliminate settings in order to get your preferred court or game length.

The game length itself is very short - even the freeplay. There is little to no reward for playing any of the "cups" in tournament mode - and in online mode, there is little in the way of ensuring your online rival matches your skill setting (beginners go up against experts in online games - making the game extremely one sided, particularly when there is lagging glitches discovered by the experts). Everyone also selects Bowser Junior - because he has a clear defense advantage, making some online games literally being up against hundreds of bowser jnrs.

The music is also unremarkable - and youll soon be switching it off after a while. Even the themed courts dont take advantage of any character themes.

FInally, unlike the previous Mario Tennis games - there are no proper cutscenes, and the story mode is heavy text dependent - and playing a predictable quick story.

The basic tennis play of the game is fantastic - its a shame they dropped the ball on everything else.

Minh Tran
5.0 out of 5 stars lobed it
Reviewed in Australia on 26 August 2020
Verified Purchase
Firstly, this game is NOT supposed to be realistic. If you're looking for a realistic Tennis game, this isn't for you. It's not supposed to be realistic, because it's MARIO TENNIS. Mario sports games tend to have special gameplay elements in order to spice up the sports in really fun ways. Now let's get to the review.

Content: The game is filled with a good number of content! The character roster is huge, ranging from the beloved characters we already know like Mario, Luigi, Princess Peach, Yoshi, Bowser, and more! There are also even more wild additions such as Chain Chomp, Blooper, Pauline, and Fire Piranha Plant! There are a few different stages to play Tennis on, such as a grassy field, a volcanic court, desert area, and the classic stadium that can have its ground customized in order to change up gameplay, with certain stadium grounds having faster ball speed, higher bounce, etc.. For fans of single player, there is a interesting story mode adventure where Mario goes on a Tennis adventure to save his brother from a corrupted tennis racket that causes lots of trouble. The story mode is full of challenges and boss battles that utilize tennis controls. In addition to that, there are side modes that you can play with your friends, such as a ring mode where you hit the ball inside scoring rings to get the highest score possible. Some of these modes allow you to unlock special in game costumes for some characters, like colored Yoshis, Overalls Mario, Tennis outfit Toad, etc.. Feeling competitive? Then try out the tournament mode! There's plenty to do, both online, and offline.

Gameplay: The gameplay is really engaging and fun. As it is a Mario sports game, it's a bit more wild than regular Tennis. You press different combinations of buttons to perform different types of shots, and you're even given the ability to slow down time and use far reach shots in order to hit the ball back at your opponent for some real tough gameplay! The controls can be a bit off if it's your first time playing, but eventually you will get used to it. There are in game instructions.

Graphics: The game is visually stunning. The characters look amazing, and the scenery is absolutely gorgeous. Not much else to say!

Overall, really great game! Definitely a fun game for multiplayer as well as single player. You might be more of a fan of realistic tennis games, but I would still give it a shot. It's still tennis, but.. Mario! It's really fun and enjoyable. There are a few things that I can kinda criticize, such as $60 is kind of too expensive for a game like this. Also there's a few things you can't configure such as how many sets you can play in a session.
Other than that, it's a solid title and I really enjoy it!
Read more
Helpful
Report abuse

Piyawat
TOP 500 REVIEWER
5.0 out of 5 stars Mario Games, fun to play with your friend.
Reviewed in Australia on 15 February 2019
Verified Purchase
The story is a bit boring to play alone. However, Swing mode is very fun to play with friend and your young kid will love it.
Read more
One person found this helpful
Helpful
Report abuse

Durkia
3.0 out of 5 stars Overrated game
Reviewed in Australia on 17 December 2018
Verified Purchase
Game relies on a lot of RNG, if you're after a pure tennis game you should avoid. "Single player" content is also pretty bad, you'd only buy this game full price for the multiplayer.
Read more
Helpful
Report abuse

Minwei Du
1.0 out of 5 stars game look like second hand
Reviewed in Australia on 16 September 2020
Verified Purchase
I got the game today. The game is not in plastic sealed and not look like a new one. The game is run ok，but still feel not happy to pay new one price but get second hand stock.

Luong Duong
TOP 100 REVIEWER
4.0 out of 5 stars Ok
Reviewed in Australia on 19 October 2019
Verified Purchase
Buy it as a gift but it didn’t have a cover.
But still look ok.
Read more
Helpful
Report abuse

Penny
4.0 out of 5 stars Fun game
Reviewed in Australia on 2 January 2021
Verified Purchase
We didn't realise that you didn't need to use a tennis racquet for this game but it is still fun & great for hand/eye coordination
Read more
Helpful
Report abuse
See all reviews
Get FREE delivery with Amazon Prime
Prime members enjoy FREE Delivery and exclusive access to movies, TV shows, music, Kindle e-books, Twitch Prime, and more.
> Get Started
Back to top
Get to Know Us
Make Money with Us
Let Us Help You
And don't forget:
© 1996-2020, Amazon.com, Inc. or its affiliates