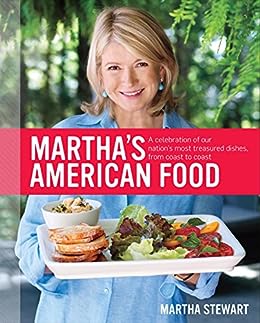 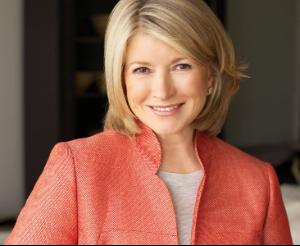 Martha's American Food: A Celebration of Our Nation's Most Treasured Dishes, from Coast to Coast : A Cookbook Kindle Edition

by Martha Stewart (Author) Format: Kindle Edition
See all formats and editions
Sorry, there was a problem loading this page. Try again.
Martha Stewart, who has so significantly influenced the American table, collects her favorite national dishes--as well as the stories and traditions behind them--in this love letter to American food featuring 200 recipes.

These are recipes that will delight you with nostalgia, inspire you, and teach you about our nation by way of its regions and their distinctive flavors. Above all, these are time-honored recipes that you will turn to again and again.

Through sidebars about the flavors that define each region and stunning photography that brings the foods—and the places with which we identify them—to life, Martha celebrates the unique character of each part of the country. With all the dishes that inspire pride in our national cuisine, Martha’s American Food gathers, in one place, the recipes that will surely please your family and friends for generations to come.
Read more
Previous page
Next page
Due to its large file size, this book may take longer to download

"" --This text refers to an alternate kindle_edition edition.

"MARTHA STEWART is the author of dozens of best-selling books on cooking, entertaining, homekeeping, gardening, weddings, and decorating. She is the host of The Martha Stewart Show, the Emmy-winning daily syndicated television program, and founder of Martha Stewart Living Omnimedia, which publishes several magazines, including Martha Stewart Living; produces Martha Stewart Living Radio; and provides a wealth of ideas and information on www.marthastewart.com." --This text refers to an alternate kindle_edition edition.

4.6 out of 5 stars
4.6 out of 5
212 global ratings
How are ratings calculated?
To calculate the overall star rating and percentage breakdown by star, we don’t use a simple average. Instead, our system considers things like how recent a review is and if the reviewer bought the item on Amazon. It also analyses reviews to verify trustworthiness.

starlight
5.0 out of 5 stars Make this one your standard
Reviewed in the United Kingdom on 29 January 2018
Verified Purchase
I go as far as to call this the ultimate book on American cooking. If you have not got any books on American cuisine, please make this one your first: Chances are that once you own it, you will either wear it out until it falls apart with constant use...., or it leaves you drooling for more and you will fill up your shelves with other high-quality volumes on the subject.

Martha is an authority on all things food, and baking in particular. The pillars of her business are her extensive knowledge and experience, which set her apart from so many others who simply rely on their marketability. The choice of recipes representing each region is superb, painting an accurate culinary picture of the diversity that is American cooking.

Starting with a chapter on foods that are known and loved from coast to coast, she sets out in the East and heads west. Each chapter reveals the distinctive character of the region. The first chapter is on New England and the Mid Atlantic states: in northern New England, seafood dominates the kitchens, along with regional products like maple syrup, cranberries, potatoes, and corn. New York City's and Philadelphia's cosmopolitan appeal originates in centuries of immigration from all over Europe, predominantly Italy and Ireland, while the Pennsylvanian countryside shows Dutch and German influences. The cooking of the South is a treasure chest of innovation.Post-war economic dependency on the North made it necessary for the people to reinvent their cuisine. They drew heavily on African influences: popular and well-known dishes like shrimp and grits, hoppin' john, collard greens, fried okra, pickled watermelon rind, and sweet potato pie give testimony. But in Louisiana, and especially New Orleans, Cajun and Caribbean Creole influences, together with the area's French roots survived, and in subsequent decades received a subtle Italian makeover, which enlivened the culinary repertoire. German, Scandinavian, and Eastern European immigrants embossed their culinary traditions on the Midwest, the area around the Great Lakes, with heavy use of dairy, pork, and wheat, alongside the region's very own "wild rice." The Southwest's Mexican heritage permeates the cooking of Arizona, New Mexico, and, of course, southern Texas: tamales, fajitas, enchiladas, salsas, and chiles rule supreme. And barbecue! Lots of barbecue... The chapter on the West deals predominantly with Californian cuisine, where everything is light and full of veggies and Mediterranean overtones.

Ingredients are easily obtainable. You won't have to make trips to ethnic grocers or markets, or order stuff online to cook these dishes. Just shop where you usually do. Okay, maybe you'll have to look a bit for catfish, and you might not be able to buy fresh jalapeno chiles in each and every Tesco or Waitrose... but that's pretty much it!

There are a few things that I've noticed, however: The book barely touches the Rockies, and the Northwest is underrepresented. The book gives amounts in pounds and cups and tablespoons, no metric measurements, so if you are set on metric you will have to start over and get used to American cup measurements (where 1 cup = 236 ml), which is not a biggie except for baking (as always) where metric produces more reliable results. These are the only two flaws imho.

Get it while you can, you will not regret it
Read more
One person found this helpful
Report abuse

HER
5.0 out of 5 stars Very thorough
Reviewed in the United Kingdom on 26 June 2013
Verified Purchase
The first caveat I must give this review is that I did not pay full price for this item. I had a £10 credit on my Amazon account to use and so only paid about £9 for this book. That said, if you have the money to spend, the £20 price tag is still worth it in my opinion.

American food is having a huge moment here in the UK right now with the ascension of the burger and hot dog culture sweeping the London food scene. That said, with most of my experience limited to the Northeast coast, I was interested in learning more about regional cuisine of the country. While definitely a recipe book, Martha's instruction is still so thorough.

At over 400 pages, there are hundred of recipes, each divided by region. The book actually starts with an 'All-american' intro which is also great to access some classics immediately. Each recipe then has a column blurb from Martha explaining a history of the dish.

Of course, being by an American author without much of a British audience, the book has not been converted into British metrics. It bothers me little, having a set of measuring cups gets you 75% of the way there. Ingredients are also not complicated, meaning that most of them could be bought easily over here.

I honestly cannot fault this book. It's comprehensive, with almost one photo per recipe, and great quality throughout. I can also recommend 'A Taste of America' for a cheaper alternative although I would say this has more readable quality, the former being more instructional.
Read more
6 people found this helpful
Report abuse

Alan
5.0 out of 5 stars A welcome Back
Reviewed in the United Kingdom on 7 September 2012
Verified Purchase
Martha ia a house hold name now not only in the usa but the world over.Her work has left her signature for ever in the hearts of those who love to cook and look after their homes.Delightful recipes from the past and present and produced with ease and somtimes lovely twists.A welcome back edition with so much more.Some that we knew but better and others that are a wonderful surprise and tasty as ever.Martha is a house hold name we love.
Read more
One person found this helpful
Report abuse

Muzsik Zoltan
5.0 out of 5 stars good buy
Reviewed in the United Kingdom on 15 July 2012
Verified Purchase
I am not American, so I bought this book only because of curiosity. After I read it, it turned out to be the best cook book what I read so far. The meals are well described, the recipes are easy to undertand. I can buy all the ingredients, even abroad. The pictures are beautiful and the foods are really delicious. I use this cookbook every week.
Read more
3 people found this helpful
Report abuse

AD
5.0 out of 5 stars American Food
Reviewed in the United Kingdom on 29 July 2012
Verified Purchase
Living in Belgium, but loving America, I was searching for a basic cookbook with all the traditionale recipies that I ate on vacations through the US.
This book is the perfect answer!!! It contains lots of recipies of the most traditional dishes.
All the recipies are sorted by region. And each region contains recipies of drinks, dishes, sidedishes and desserts.

It is also a lovely book to read: it's nice, the pictures are beautiful and you just wanna get started in the kitchen.

An absolute must for the classic American recipies.
Read more
One person found this helpful
Report abuse
See all reviews
Back to top
Get to Know Us
Make Money with Us
Let Us Help You
And don't forget:
© 1996-2021, Amazon.com, Inc. or its affiliates