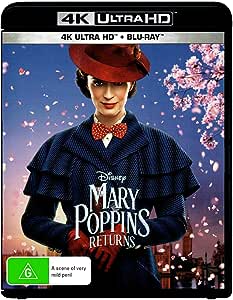 Mary Poppins (Emily Blunt) helps the Banks family remember the joy of what it is like to be a child. Together, with her friend Jack, the lamplighter (Lin-Manuel Miranda), fun is brought back to the streets of London in celebration that everything is possible...even the impossible.

4.1 out of 5 stars
4.1 out of 5
29 global ratings
How are ratings calculated?
To calculate the overall star rating and percentage breakdown by star, we don’t use a simple average. Instead, our system considers things like how recent a review is and if the reviewer bought the item on Amazon. It also analyses reviews to verify trustworthiness.

Stirling Runyon
5.0 out of 5 stars A magical film
Reviewed in Australia on 13 April 2019
Verified Purchase
We're loving the sing-a-long dvd version of this. It's a fabulous film. Not a re-make but a sequel to the Julie Andrews Poppins. A major difference is that the director gives Emily Blunt far more opportunities to add to the Mary Poppins. Great moment when she listens to the children's reactions to things she say and does or telling reaction shots that show a variety of emotion. Emily Blunt is great as are the whole cast.
I took my six and eight year old boys to see it at the cinema and they got restless - it's long. But afterwards they asked questions about the Mum who'd died and we talked about loss and grief in terms of the film - the film handles it so well. And we love the songs. Had them on in the car and when we watched the dvd with sing-a-long on we were all singing. It's terrific.

"mellowmarshman"
3.0 out of 5 stars Good effort, but the bar was set too high...
Reviewed in Australia on 5 January 2021
Verified Purchase
Film - well how do you equal, let along surpass the original. The bar was set too high for that to ever really be likely. So taken in isolation, film is OK, but it's impossible to not make comparisons.
Emily Blunt has a commendable crack at Mary, but Lin-Manuel's Jack continues the head scratching policy of putting an American actor into a true-blue cockney role and, great actor he is in other things, his character lacks any kind of spark here. Dick may have sounded comical but his charisma made up for it. Routines and songs are enjoyable enough and the story is sufficiently interesting.
As for the 4K technical specs, I found the picture to be one of the least impressive of the 4k's I've watched so far. Probably still the best way to watch it, but don't expect to be blown away by the picture or sound, although they're good enough.
So overall, not a bad film and not a bad presentation, but weighed down by the past and an average technical presentation.

Amazon Customer
1.0 out of 5 stars Not for me.
Reviewed in Australia on 22 November 2020
Verified Purchase
I did not like this dvd. The music too loud and just not my type of thing.
Read more
Helpful
Report abuse

Antonio M Melendez
1.0 out of 5 stars Not good
Reviewed in Australia on 27 August 2020
Verified Purchase
For me it was a crap film, not good not good at all.

Amazon Customer
5.0 out of 5 stars Instant family favorite.
Reviewed in the United States on 29 September 2019
Verified Purchase
This sequel to the wonderful Mary Poppins original movie has been an instant hit with both young and old in the family. Highly recommended. Has been viewed multiple times and enjoyed over and over!
Read more
Report abuse

Itsirk
5.0 out of 5 stars Love the movie!
Reviewed in the United States on 30 September 2019
Verified Purchase
I love the movie in theaters so I was so excited to get it for home too!
Read more
One person found this helpful
Report abuse

Becky Keil
5.0 out of 5 stars Must see
Reviewed in the United States on 29 October 2019
Verified Purchase
Love this movie we watch it all the time!
Read more
One person found this helpful
Report abuse
See all reviews
Get FREE delivery with Amazon Prime
Prime members enjoy FREE Delivery and exclusive access to movies, TV shows, music, Kindle e-books, Twitch Prime, and more.
> Get Started
Back to top
Get to Know Us
Make Money with Us
Let Us Help You
And don't forget:
© 1996-2020, Amazon.com, Inc. or its affiliates