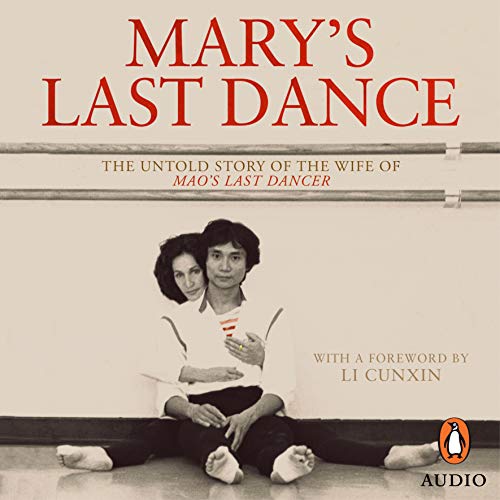 I can vividly remember the last steps of the last ballet, walking off the stage led by a mother and knowing the decision I had to make. That was my last dance.

Mary Li (née McKendry) is an international ballet star and a mother like no other. She became a household name when her husband, Li Cunxin, published his best-selling memoir, Mao's Last Dancer - but that book told only half the story.

Growing up in a rambunctious family in Rockhampton, Mary discovered an extraordinary early passion for ballet. It saw her move to London at age 16, to study at the Royal Ballet School and dance at the London Festival Ballet with the likes of Nureyev and later to Houston Ballet, where as principal dancer she fell in love with the acclaimed Chinese ballet dancer Li Cunxin. The couple became the darlings of the dance world and were happier than they could have imagined at the arrival of their firstborn daughter, Sophie.

Then right at the height of her international career, Mary seemingly disappeared from view, leaving the fans aghast. What could have happened to cause a woman so committed, so talented, to give it all away in a heartbeat? Now, almost 20 years on, fans finally get their answer about what happened next to this inspiring family and learn why it is Mary's turn to tell a truly remarkable tale.

Mary's Last Dance is a powerful and uplifting memoir about chasing an impossible dream and sacrificing one's own ambition for the love of a child. It is a moving and unforgettable story of passion, dedication and devotion - and the highly anticipated sequel to one of the world's most beloved books.

Read more
©2020 Mary Li (P)2020 Penguin Random House Audio
Previous page
Next page
Learn more about membership
By completing your purchase, you agree to Audible’s Conditions Of Use and Privacy Notice.
Sold and delivered by Audible, an Amazon company

4.5 out of 5 stars
4.5 out of 5
441 global ratings
How are ratings calculated?
To calculate the overall star rating and percentage breakdown by star, we don’t use a simple average. Instead, our system considers things like how recent a review is and if the reviewer bought the item on Amazon. It also analyses reviews to verify trustworthiness.

Eve VibesofLight
5.0 out of 5 stars ABSOLUTELY BRILLIANT!!!🌟🌟🌟🌟💖
Reviewed in Australia on 9 September 2021
Verified Purchase
This book is inspirational, heart Warming, Emotionally provoking, and is a Fantastic inside view to the Ballet world. This book also gives you remarkable insite into the world of the Deaf, & the struggles a family and parents face raising a profoundly deaf child. Yet this book offers you so MUCH MORE! I Laughed and cried, got excited and saddened throughout the whole book from beginning to End! It has left me wanting to understand more! More about Sophie's journey and that of many who are born profoundly deaf, as well as Wanting to know more about Ballet, the Arts, and Everything around Mary and Li's lives.
Thankyou Mary Li for sharing your life journey with us, the Profound insights, struggles, and Emotional journey your Fantastic life has been! I am truly Grateful that I came across this book an I HIGHLY RECOMMEND it for anyone to read!🥰
Read more
Helpful
Report abuse

David R Henderson
4.0 out of 5 stars A true story about highly successful ballet dancers
Reviewed in Australia on 23 January 2022
Verified Purchase
This is a very interesting account by Mary Li, ne Mckendry, the wife of Li Cunxin, otherwise known as Mao's Last Dancer, the Artistic Director of the Queensland Ballet. The book recounts her early life, introduction to ballet in Northern Australia and her subsequent career as a top dancer and meeting and relationship with Li Cunxin. Much of the latter half of the book is devoted to the difficulties the couple had in coming to terms with their daughter's profound deafness, which caused Mary to give up dancing, and their determination to do the best for their daughter, now a grown and independent young woman. The book is interesting, even for non-ballet lovers and is particularly interesting to Australians, because Mary made a great career in Ballet.
Read more
Helpful
Report abuse

Kindle Customer
4.0 out of 5 stars A fascinating insight!
Reviewed in Australia on 8 August 2021
Verified Purchase
I loved the descriptions of life in a big family, its good points and challenges. I found Mary's journey to becoming a well known ballet dancer interesting. In the end it was Sophie's story and I was amazed at Mary's dedication and love in her quest to help Sophie be part of the hearing world. I did feel that Mary should have allowed Sophie to learn Auslan earlier in the piece as I think it has been shown to help deaf people improve their language. All in all I loved the book but found Mary totally exhausting as she did so much all the time.
Read more
Helpful
Report abuse

Susie Lawson
5.0 out of 5 stars A sheer delight
Reviewed in Australia on 23 December 2020
Verified Purchase
I couldn’t put this book down. It is such a beautiful story, especially when we knew of Li’s life from his book and movie. What we didn’t know was how impressive Mary is...as an artist, teacher, mother, advocate, wife, writer...the list goes on. Her love for family is overwhelming, I smiled and laughed and shed many a tear at the happy and sad times. Listening to her podcast and then hearing her speak at the Powerhouse, one could not but read this beautifully told story. Take a bow Mary. I loved every sentence.
Read more
Helpful
Report abuse

Polly
5.0 out of 5 stars Mary & Li have both shared their story. Absolutely incredible.
Reviewed in Australia on 16 June 2022
Verified Purchase
Mary it was a privilege to read your book. I too was born in Rocky into a family of 10 children so can relate to your tales of siblings. The names of children who were dancers & their teacher Valerie Hansen brought back memories. I was never a dancer but went to school at the Range with them.
You & your husband did a fantastic job bringing up your family & dancing at the same time. Your day seemingly endless..You put a lot of hours into helping Sophie who is a remarkable lady in her own right.
I have McKendry cousins who lived in Emerald. Loved going there for holidays & going down to Uncle Bill’s shop. Once again I admire you & Li. Thanks for sharing your story.
Read more
Helpful
Report abuse

louise fisher
4.0 out of 5 stars A remarkable story of unconditional love
Reviewed in Australia on 28 November 2020
Verified Purchase
Mary's Last Dance by Mary Li - for those of you who were lucky enough to read (or see the wonderful movie) of Mao's Last Dancer by Li Cunxin - this is the other half of the family story, written by Li's remarkable wife Mary.
Like Li, Mary too was a world class ballerina. At the height of their dancing careers, they met in Houston, danced together on stage, fell in love, got married and soon started a family.
Beautiful Sophie was born and she certainly was the love of their young lives. Mary and Li juggled their busy dancing career, looking after their baby girl, as she seemed to be reaching all her developmental milestones . It was one day when a loud balloon popped right next to Sophie and she never reacted that it sent alarm bells sounding out to both parents.
Both Li and Mary's world was turned upside down when Sophie was tested and it was discovered that she was profoundly deaf.
Both Li and Mary, the most energetic, determined, focused parents I know, were about to embark on a journey with Sophie that will leave you spellbound.
Mary, at the peak of her brilliant career, gave it all up for the love of her daughter.
In this almost 500 page memoir you will learn so much about sacrifice, making choices, the journey and experiences in a deaf world, but most of all you will learn about unconditional love.
When I first started the book, I found it a touch too detailed with family information, but then once Sophie came along, I could do nothing but read. I cried great big tears as I fell in love with each and every member of this extraordinary family. I adored how you all embraced the Chinese culture. I loved your time in Melbourne as I could relate to so many places in my home town.
Sophie my love, you are one exceptional young lady and Mary and Li, thank you for sharing this raw account of life with the Li family. Loved you all.
Read more
Helpful
Report abuse

Zermatt
5.0 out of 5 stars Recommended reading
Reviewed in Australia on 7 August 2021
Verified Purchase
A lovely story, and a real and totally personal insight into the lives of this family and challenges of both parenting a deaf child, and the challenge of being that child in a family determined to have her as part of the hearing world. Highly recommended reading
Read more
Helpful
Report abuse

Sue H
5.0 out of 5 stars A story full of inspiration
Reviewed in Australia on 22 December 2021
Verified Purchase
I loved the book Mao’s last dancer so was very interested in what happened next. Well this book is an amazing read. What Mary undertook to help her deaf daughter live in a hearing world is amazing. The journey has many highs and lows. As a parent Mary questions some of her decisions which makes it all the more authentic. A beautiful book that gives the reader a glimpse into the life of this amazing family. Well done and thank you Mary Li
Read more
Helpful
Report abuse
See all reviews

Kindle Customer
5.0 out of 5 stars But not the end of the story
Reviewed in the United States on 12 October 2021
Verified Purchase
Mary li was a highly acclaimed ballerina. She had been very successful. She danced with some of the most important dance companies of all time. Nothing had prepared her for her biggest challenge. Her first born, Sophie, was diagnosed as profoundly deaf at age 2. She would spend the next twenty years trying to help Sophie find her place in this world. It is a non-stop reading experience.
Read more
Report abuse
See all reviews