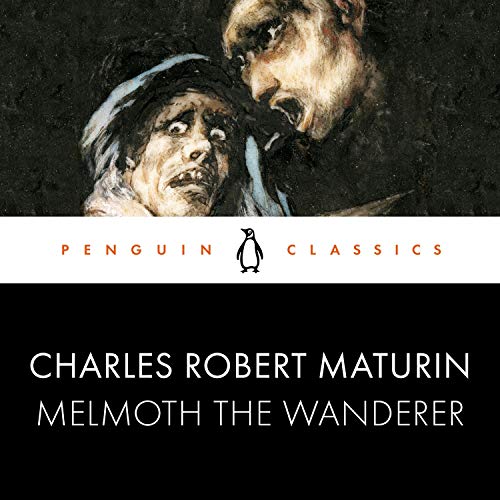 Created by an Irish clergyman, Melmoth is one of the most fiendish characters in literature. In a satanic bargain, Melmoth exchanges his soul for immortality. The story of his tortured wanderings through the centuries is pieced together through those who have been implored by Melmoth to take over his pact with the devil.

Influenced by the Gothic romances of the late 18th century, Maturin's diabolic tale raised the genre to a new and macabre pitch. Its many admirers include Poe, Balzac, Oscar Wilde and Baudelaire.

Switch between reading the Kindle book & listening to the Audible narration with Whispersync for Voice.
Get the Audible audiobook for the reduced price of $13.99 after you buy the Kindle book.
Learn more about membership
By completing your purchase, you agree to Audible’s Conditions Of Use and Privacy Notice.
Sold and delivered by Audible, an Amazon company

4.1 out of 5 stars
4.1 out of 5
108 global ratings
How are ratings calculated?
To calculate the overall star rating and percentage breakdown by star, we don’t use a simple average. Instead, our system considers things like how recent a review is and if the reviewer bought the item on Amazon. It also analyses reviews to verify trustworthiness.

Dolores
4.0 out of 5 stars A complelling Gothic Faust story
Reviewed in the United Kingdom on 6 July 2015
Verified Purchase
This is one of the strangest books I have ever read, but extremely compelling. Imagine a re working of the Faust story, but set in the Gothic romance tradition of the early 19th century. It is really about " an odd story in the family" - of someone way back in the family who had made a pact with the devil. I loved the early scenes set in Ireland, so full of humour, with the staff taking advantage of the master's illness to drink and laze about. The house there has a portrait of a 17th century ancestor yet its subject has been seen wandering about in recent times. The book is also an attack on some aspects of organised religion, on catholic tradition and conventual life in Spain. The anti catholic vituperation is reminiscent of Voltaire's writings in the 18th century. The structure of this book is that stories are 'nested' within stories, which can make it difficult to follow at times, so I have given this 4 stars. Think of this as a precursor to Mrs Radcliffe, Edgar Allan Poe, R L Stevenson, Bram Stoker- but absolutely original in itself. I am sure you will never read another book like it. I may well re read it.
Read more
8 people found this helpful
Report abuse

Mr. M. Murray
4.0 out of 5 stars Looong- but good.
Reviewed in the United Kingdom on 20 December 2020
Verified Purchase
I really enjoyed this book. It does go around the houses a bit, and probably could have dropped a few hundred thousand words without detriment to the narrative. But in the end, I was glad I persevered.
Read more
Report abuse

Tony Barber
3.0 out of 5 stars Early 19th-century Gothic horror classic but hard going today
Reviewed in the United Kingdom on 15 August 2018
Verified Purchase
It is a classic of its kind, but modern readers will find it much too long, rather ponderous and strangely prejudiced in its religious outlook. Strictly for connoisseurs.
Read more
One person found this helpful
Report abuse

Nathan Leigh
5.0 out of 5 stars Wander away with him.
Reviewed in the United Kingdom on 8 July 2016
Verified Purchase
A stunning example of global Gothic literature that still throws questions over choice after choice.
Thoroughly enjoyable reading.
Read more
2 people found this helpful
Report abuse

Fang
1.0 out of 5 stars Difficult and boring read
Reviewed in the United Kingdom on 9 November 2018
Verified Purchase
Read when a teenager, many decades ago. Now cannot see what fascinated me back then. Slow moving, wordy, gave up after first thirty pages.
Read more
One person found this helpful
Report abuse
See all reviews