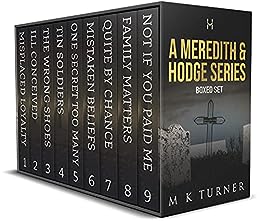 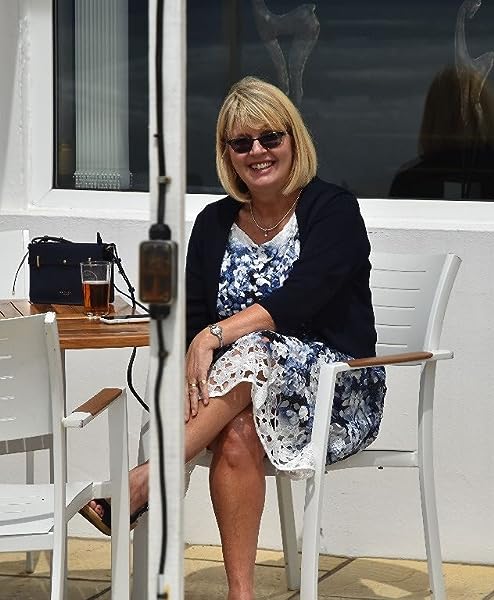 “Great characters, wonderful storytelling, British Detectives at their best!”
“Best detective series I have read in a very long time.”

John Meredith & Patsy Hodge are a detective duo who are excellent in their jobs but often secretive and conflicted in both their working and personal relationship. However, nothing gets in the way of them solving a case. In this boxed set, find them up against murderers, child abductors, right wing thugs, Russian mafia, terrorists, serial killers and everything in between. Meet your new favourite detective duo today, and find out why over 1600,000 readers have downloaded M K Turner’s popular series.

Misplaced Loyalty – Assisted suicide or euthanasia? Meredith calls it murder!
Ill Conceived – Why is an apparently innocent young woman prime suspect in a motiveless, senseless murder?
The Wrong Shoes – Why did a pair of shoes set off a string of murders and a kidnapping?
Tin Soldiers – Who is snatching young girls off the streets of Bristol and why?
One Secret Too Many – A forty-year-old mass murder in Eastern Europe entwines the cases of Meredith & Hodge. Why are the SIS involved, and who will survive the ultimate showdown with the Russians?
Mistaken Beliefs – Meredith puts everything on the line to prove his oldest friend is innocent of murder. Ignoring his ill health, the risk to his career, and his relationship with Hodge. Will justice be done, was it worth the risk?
Quite by Chance - Meredith & Hodge are stranded up a mountain with two dead bodies and a murderer on the loose, Christmas is put on hold until they can catch the killer.
Family Matters – Meredith’s half-brother turns up with a body in his car, and Meredith is arrested for armed robbery. One man is behind both events, Meredith just has to find him.
Not If You Paid Me - Nigel Foxton was jailed for the murder of three women, not only was the evidence damning, but during the trial he changed his plea to guilty. Case closed . . . or was it? More bodies are turning up with the same calling card.

Do you want the answers? Get this boxed set now!

Marcia has enjoyed writing for many years but only for pleasure and friends or family. Her first novel Murderous Mishaps is a farcical whodunit set in her favourite hotel in Cornwall, although she did of course change the name so as not to tarnish their reputation. Marcia wrote Murderous Mishaps for a friend, who after regaling her with all the latest gossip said 'they wouldn't believe you if you wrote it down.' So she did. All based on true stories but totally exaggerated of course.

Marcia is also writes the Bearing Witness series. Crime and suspense, with a touch of the paranormal.

Marcia is married, with two children, two grandchildren, two German Shepherds and a Bichon Frise. They live in Bristol UK

Marcia can be contacted at

4.6 out of 5 stars
4.6 out of 5
32 global ratings
How are ratings calculated?
To calculate the overall star rating and percentage breakdown by star, we don’t use a simple average. Instead, our system considers things like how recent a review is and if the reviewer bought the item on Amazon. It also analyses reviews to verify trustworthiness.

Kindle Customer
5.0 out of 5 stars Loved the characters and storytelling
Reviewed in the United Kingdom on 4 September 2021
Verified Purchase
This is just the series for you if u enjoy a light-hearted, well told story.
The characters are well thought out and fall into the storyline seemlessly. The main character was (happily, she thought) married only to be dumped by the controlling hubby in her mid life. She set off to make a new life, far removed from her previous one. She then had room to grow into her own self. Classing herself as a 'people watcher' she finds herself embroiled in mysteries. Helped by her work as an obituary writer, she gets folks to talk more freely than they would to the police. Setting up storyboards she works out whodunit.
More believable than some with the obituary writing giving her access to a varied set of people who worked with, family, friends of the victim. Not always easy to work out the murderer as it usually comes to her when she sets out the timeline after talking to everyone and comes 'in an epiphany lol'.
Enjoyable way to spend a few hours reading.
Read more
One person found this helpful
Report abuse

jenny stephenson
5.0 out of 5 stars Wonderful read
Reviewed in the United Kingdom on 11 January 2022
Verified Purchase
I have read all 9 Meredith and Hodge books back to back and thoroughly enjoyed them. The detective part of the stories are well done and keep you guessing for the most part but I loved the personal side of the stories and the interaction between the characters, it gave you a feeling of knowing them. They were also witty bits and normal everyday emotions thrown in giving you a real sense of the characters. Not so keen on book 5, which included spies. Overall fantastic.
Read more
Report abuse

NannaB
5.0 out of 5 stars Great series
Reviewed in the United Kingdom on 8 January 2022
Verified Purchase
I lived the first book and was so pleased I got the whole first 9 free on Amazon Prime. Love Meredith and Patsy and their relationship and goodness knows why she stuck with him. All the stories are believably, not gory murders and lived all the characters too. I van really recommend the series.
Read more
Report abuse

Amazon Customer
5.0 out of 5 stars Good read
Reviewed in the United Kingdom on 8 November 2021
Verified Purchase
These stories were a good read well written and told,, characters were interesting and were as real as they come.
Read more
One person found this helpful
Report abuse

Kindle Customer
5.0 out of 5 stars They really are good
Reviewed in the United Kingdom on 4 December 2021
Verified Purchase
Book 8 a bit trying but got there in the end ! Gripping series - wonderful iro ic humour and so glad they made it
Read more
One person found this helpful
Report abuse
See all reviews
Back to top
Get to Know Us
Make Money with Us
Let Us Help You
And don't forget:
© 1996-2022, Amazon.com, Inc. or its affiliates