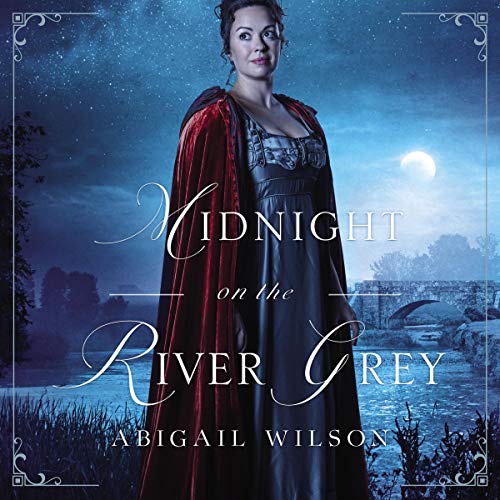 Midnight on the River Grey

4.6 out of 5 stars
4.6 out of 5
90 global ratings
How are ratings calculated?
To calculate the overall star rating and percentage breakdown by star, we don’t use a simple average. Instead, our system considers things like how recent a review is and if the reviewer bought the item on Amazon. It also analyses reviews to verify trustworthiness.

Fiction Aficionado
TOP 500 REVIEWER
4.0 out of 5 stars Delicious Gothic atmosphere
Reviewed in Australia on 12 July 2019
I adore the Gothic atmosphere Abigail Wilson creates in her Regency novels. Even descriptions of perfectly mundane details, such as the room the characters are in and the time of day, are carefully calculated to perpetuate that delicious sense of uncertainty and nervousness: On Saturday night, Aunt Jo and I gathered in the drawing room, the dark night lurking beyond the curtains, a chill hovering just beyond the reach of the large fireplace.” I get tingles all over again just typing it. Couple that with a plot that really did take me by surprise in the last quarter, and you have the makings of an unputdownable read.

There were a few aspects, though, that I felt didn’t quite reach their full potential—in particular, the main characters. I’m a bit of a sucker for a Gothic hero—the more complex the better! And I did like Lewis Browning, but in some ways, that was the problem. He was a little bit too easy to like, whereas I would have preferred there to be more mystery or even broodiness about his character.

And then there was Rebecca, whom I have to admit annoyed me at times, particularly the way she went about trying to discover information about her brother’s death. She didn’t really think through some of her actions (even as she justified them to herself and the reader), and she was a fairly flat character overall. I would have loved to have seen her grow more as a person.

The romance develops subtly for the most part—just the way I like it in a Gothic—but I have to admit I sometimes wondered what Lewis saw in Rebecca. She didn’t do a lot to endear herself to him. But for those who are looking for great atmosphere and an intriguing mystery in their next Gothic read, this one is sure to satisfy.

I received a copy of this novel from the publisher. This has not influenced the content of my review, which is my honest and unbiased opinion.
Read more
Helpful
Report abuse
See all reviews

Stephanie McCall
4.0 out of 5 stars Come In. The Water's Chilly, But Delicious.
Reviewed in the United States on 11 January 2020
Verified Purchase
I admit, I didn't have high hopes for Midnight on the River Grey, considering Shadow of Croft Towers was a disappointment. Yet as sometimes happens, Abigail Wilson came back in a big way with a strong sophomore release. Carrying shades of Sandra Byrd's Daughters of Hampshire trilogy, Jane Eyre, and the like, River Grey packs a suspenseful punch while giving us characters to care about and arcs to root for.

Rebecca Hunter carries the story as a good example of my favorite character type--someone seeking independence and selfhood when everything and everyone around her says she can't have it. Her "spells" netted her sympathy and curiosity, but she is never a victim. In fact, with her mist-laden secret explorations, determination, and strong Scottish spirit, she won my heart in short order, proving herself braver than I am and thus, admirable in the first degree. She can be impetuous and stubborn, but those flaws make you root for her to find healing and satisfaction all the more. At times in fact, you side with her in her weak moments precisely because you know other characters don't understand her point of view, nor do they want to. You want them to see her as a valuable, worthy person.

As for Lewis, he too is enjoyable. He's close enough in name and character that I often got him mixed up in my head with Sandra Byrd's Lucas Whitfield, which is a problem. I also would've liked to know more of the "why" behind his espionage activities, because I'm not well-versed in French/English military history, nor are a lot of readers, I would guess. Aside from that though, he's a solid match for Rebecca and a solid character on his own. Maddeningly logical and cool at times, he also manages to be funny, endearing, and vulnerable in the right spots.

The secondary characters--well, some are better than others. Aunt Jo was a favorite, and I loved her unexpected but perfect romance with Mr. Fernside (I agree with her and Rebecca; living over a library would be heaven)! I also enjoyed Sophie, although I might have preferred a kitten, being a feline-lover. :) Adam and Isabell were interesting adversaries, though I might have liked more shading. As to the real villain--whoa, great plot twist. Again, more development would've been welcome, but what exists works great. It also puts Rebecca in the great position of deciding how far she's expected or willing to go for those she loves--and loved first or last.

The plot moves at a respectable clip, with enough time devoted to mystery and romance to balance both (I might have liked a tad more romance, but it's almost there). The clues and suspenseful events hold interest and tie in well with the overall character journeys. Again, the espionage plot seems a little weak, but it could've been a lot worse. Overall, River Grey solidly earns its four-star rating and I'm looking forward to Abigail Wilson's next book with anticipation.
Read more
4 people found this helpful
Report abuse

Rebecca Maney
4.0 out of 5 stars An Alluring Regency Romance!
Reviewed in the United States on 2 February 2020
Verified Purchase
"I'd found a man - - - - conflicted. Slow to speak, yet clearly riddled with secrets."

Secrets. So many secrets. Rebecca Hunter's tenacious determination to ferret them out is clearly matched by her guardian's skill at keeping them close. On the dark night that her brother was killed, what actually happened on that bridge; a terrible accident or cold blooded murder? Nearly everyone believes that Lewis Browning was somehow responsible, but after getting to know the enigmatic master of Greybourne Hall, Rebecca begins to wonder if the truth about Jacob's untimely death will ever be exposed. Now living under its very roof, Rebecca finds that the old majestic estate seems to crawl with mysterious inclinations all its own, some of them hidden in plain view while others beckon to her in the night.

PdukeAmazon Customer
5.0 out of 5 stars Wonderful story
Reviewed in the United States on 14 July 2019
Verified Purchase
Midnight on the River Grey is the kind of story I love to get lost in with its old house, mystery, and sweet love story. I am always sad to finish and return from another time and place. Loved all the characters and also little Sophie dog. Abigail Wilson is an outstanding author!
Read more
3 people found this helpful
Report abuse

Jennifer Berry
5.0 out of 5 stars Enjoyable Mystery & Revelations
Reviewed in the United States on 14 February 2020
Verified Purchase
The main characters, Lewis and Rebecca, are realistic and interesting. I enjoyed the mystery, the misunderstandings, and the way it all was revealed and came together in the end. I want to read more by this author in the future.
Read more
One person found this helpful
Report abuse

Lady8ug9
5.0 out of 5 stars LOVED IT!!
Reviewed in the United States on 7 January 2020
Verified Purchase
I have not been able to give a story a FIVE STAR in a long time. This was amazing. I could not put this down till the last page. I am looking forward to this author’s next book.
Read more
One person found this helpful
Report abuse
See all reviews
Back to top
Get to Know Us
Make Money with Us
Let Us Help You
And don't forget:
© 1996-2021, Amazon.com, Inc. or its affiliates