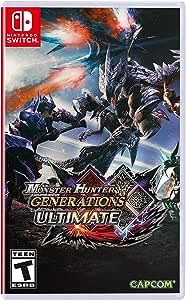 Fastest delivery: 7 - 9 Dec
Ships from and sold by Amazon US.

Monster Hunter Generations Ultimate is the follow-up to Monster Hunter Generations, and marks the Monster Hunter series' debut on Nintendo Switch as an exclusive. Hunters can face off against the largest roster of unique monsters in any Monster Hunter game to date. Players take on the role of a brave hunter challenging larger than life beasts that yield valuable resources used for crafting unique weapons and equipment. Accept hundreds of quests solo or with friends in this nostalgic look back at the series' beginnings and evolutions. Along the hunter's journey, players must defend each of the game's four villages from major threats known as the Fated Four, plus an even more dangerous new Elder Dragon. This game features a blend of classic gameplay and unique new twists, brand new explorable areas and monsters, plus returning fan-favorites like the lightning fast Zinogre and the stealthy long-tailed Nargacuga. Fans will be able to play in tabletop mode or in handheld mode on-the-go with up to three other hunters locally or online when it releases on August 28, 2018.

This critically acclaimed action RPG series makes its debut on Nintendo Switch. Take on epic hunts on the go or from the comfort of your own home! Choose from 14 different weapon types, mix and match them with unique Hunting Styles and Hunter Arts, or even play as an adorable but ferocious Felyne in Prowler Mode! Featuring the largest cast of monsters for any game in the series, from returning fan favourites to mysterious never-before-seen monsters!

You can join up to three other players for co-op multiplayer action, either online or in person using local wireless. Join the hunt in Monster Hunter Generations Ultimate for Nintendo Switch!

4.7 out of 5 stars
4.7 out of 5
1,185 global ratings
How are ratings calculated?
To calculate the overall star rating and percentage breakdown by star, we don’t use a simple average. Instead, our system considers things like how recent a review is and if the reviewer bought the item on Amazon. It also analyses reviews to verify trustworthiness.

Gamer
5.0 out of 5 stars MHGU Review for Newbies, Veterans, and World-Only Players
Reviewed in the United States on 28 August 2018
Verified Purchase
+++ My credentials +++

I'm a Monster Hunter veteran since 2006 in the time of the ancient PS2 network adapter. I've beaten and clocked over 200 hours in every North American game in the series. The only exceptions are 70 hours for Stories because it's a shorter spin-off, and 60 hours for World because although I enjoyed it, it was easier than previous games in the series and lacked the content at launch to keep me playing.

My absolute best co-op memories are from playing this series with my husband and friends. I love MH so much, I have a tattoo of a Felyne!

The Dark Souls before Dark Souls was used to describe games with a high difficulty curve ;)

MH is a challenging action role-playing game where you play as a Hunter with gigantic melee and/or ranged weapons.

The game is quest-based, giving you timed missions to different environmental maps to slay and/or trap various monsters, many of which are wyverns.

It's all about learning perfect timing -- when to attack, when to dodge, when the monster will do the same. Fail to adapt, and you will get brutally punished.

There are no experience points for leveling up -- player skill coupled with monster carves, map resources, and quest rewards allow you to craft better equipment, and thus hunt more powerful monsters.

MHGU can be played solo or up to 3 other players via local wireless and online co-op.

The "quality of life" you may expect from World is not in the previous games. For example...

There will be no glowing bugs guiding you -- you'll have to learn monster spawning locations and habits. And for Congalala's sake, use your dang paintballs.

You will have to bring pickaxes and whetstones because they're not on you by default.

You will have to choose one weapon before you start a quest and git gud -- you can't change your equipment at base camps.

You will have to choose between blademaster and gunner armor because the game balances giving you higher defense for melee and lower defense for ranged.

There isn't a skill for preventing tripping by other players :(

... That being said, this game is bigger and more of a challenge!

This iteration of MH has the most monsters of any game in the series, bringing 93 monsters to the hunt.

Compared to around 30 in World at launch, that's a massive amount of content. Some are brand new and some are returning favorites. Some are "shiny" variants, special deviants, and even hyper versions of others. These infamous cousins have extra moves and/or different stats, including weak spots, damage output, hit points, and elemental attributes.

There are also around 30 different maps compared to approximately 10 in World at launch.

All 14 weapons return, as well as six Hunter Styles -- expanded from four in MHG -- with brand new Hunter Arts and a brand new concept called SP Arts. All of these add fun new ways to play with classic weapons. I can't put into words how satisfying it is to dodge a wicked-fast raging Silverwind Nargacuga three times in a handful of seconds with Valor Style then smack it in the face!

Beloved Palicoes also return with a wide variety of weapons, armor, and abilities for your Felynes and Melynx! You can choose up to two Palicoes to take with you on quests, or go all out in Prowler Mode and be a fierce Palico yourself!

This game retains the traditional setup of requiring players to fight through Low Rank, High Rank, and now G-Rank and EX quests. This means the same monster from Low Rank will hit much harder, have higher HP and defense, rage more often, and possibly have new moves in High Rank, and again at G-Rank.

There's now also Hunt of the Day! Extra rewards are given for hunting specific monsters every day after 5am and 5pm.

MHGU has the most tutorials of all pre-World games through Training quests, Low Rank quests, and menu guides. But the best way to learn is playing with others -- it's how I learned in MH1 and it's how I've brought more players into every generation of the series. There's no argument that World was the easiest and most accessible of the MH games; however, thanks to the rapid growth of the MH community (Reddit/Twitch/YouTube/Discord/etc) after the wildly successful World, it's now easier than ever to find other players to learn and hunt with. In fact, I encourage everyone who has only played World to try the previous games now that you have a better understanding of the mechanics of the game -- this will open up sooooo many new monsters and maps for you to enjoy!

Please note there is no "best" set of equipment. The Twitch/YouTube community came under scrutiny from the MH community when streamers tried to convince others there was a "meta" set of weapons/armor. While end-game weapons/armor have better stats, your gear should ultimately reflect your play-style by selecting a combination of weapons, Hunting Styles/Arts, and armor/Skills that compliment each other.

If you want to do more research, please seek reputable sources such as the Kiranico Database and the YouTuber Gaijin Hunter.

MHGU's graphics have been updated from MHXX on the 3DS, so everything is more detailed and the game runs as smooth as Nerscylla silk, even undocked. It won't look like World on PS4/PC, but it doesn't need to; graphics are not correlated to great gameplay, as the massive indie and retro gaming revolution has proven. To be honest, I'd rather have a MH with PS3 graphics that never lags on my Switch than have a MH that lags on my PS4, as was unfortunately the case with World. And just like with the PSP and 3DS games, there's something really special about being able to just pick up your system and go play with friends anytime, anywhere.

I've enjoyed every single MH game to date, but overall -- with vast amount of monsters and maps; the sheer quantity of customization options via weapons, armor, Skills, Hunting Styles, Hunter Arts, SP Mode, and Palicoes; and the priceless capability to easily play together in real life -- this is my fave MH game thus far!

If you've played MHG on the 3DS, you can download the MHGU Save Data Transfer App to bring your progress over to the Switch game and focus on the new content.

I highly recommend checking that your Joy-cons are up-to-date before playing. Timing is crucial in this game, so if they don't respond as soon as you press a button 100% of the time, then go to System Settings > Controllers and Sensors > Update Controllers. If that doesn't fix them, then get a Switch Pro Controller or contact Nintendo for repairs/replacements.

Monster Hunter demands time to learn monsters and maps. It demands practice to master weapons and dodging. It demands grinding to get the rare drops necessary for better equipment. No exaggeration -- my husband and I fought Azure Ratholos 47 times in MH3U to get the Rathalos Rubies he needed for his armor set.

But MH has a dedicated worldwide following for these very reasons, and it's possibly the most satisfying and fulfilling co-op game ever.

The immense sense of accomplishment I feel when "Quest Complete" flashes across my screen and the victory music plays -- especially after taking down a particularly hard monster in a full 4-player hunting party -- is what keeps me playing year after year. No other notoriously hard game has ever given me that same high -- not Dark Souls, not Ikaruga, not Bloodbourne.

But regardless of the direction Capcom takes with this series in the future, please respect the series, its roots, and each other. We are all Hunters now.
Read more
278 people found this helpful
Report abuse
See all reviews
Get FREE delivery with Amazon Prime
Prime members enjoy FREE Delivery and exclusive access to movies, TV shows, music, Kindle e-books, Twitch Prime, and more.
> Get Started
Back to top
Get to Know Us
Make Money with Us
Let Us Help You
And don't forget:
© 1996-2020, Amazon.com, Inc. or its affiliates