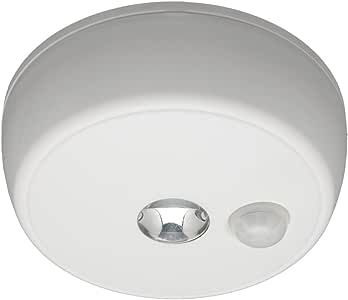 Motion-activated bright ceiling light that installs in minutes without wires. Great solution to light up closets, attics, showers, sheds, pantries, gazebos, rv's, boats and many other dark areas. Bright led never needs to be replaced. Motion sensor detects at 15 foot to turn on light automatically. Ceiling light turns off automatically in 30 seconds if no motion is detected. 80 lumens lights up an area of more than 150 square feet. Light sensor keeps light off during the day. Weatherproof for outdoor applications. Operates more than one year on a set of 3 C batteries (not included). 1-year limited warranty.

4.3 out of 5 stars
4.3 out of 5
1,736 global ratings
How are ratings calculated?
To calculate the overall star rating and percentage breakdown by star, we don’t use a simple average. Instead, our system considers things like how recent a review is and if the reviewer bought the item on Amazon. It also analyses reviews to verify trustworthiness.

Thomas Cambrensis
3.0 out of 5 stars Its quite heavy with four large batteries inserted
Reviewed in the United Kingdom on 7 August 2018
Colour: WhiteSize Name: 1-PackVerified Purchase
Having just fitted this to the ceiling in our shower I have realised how heavy it is and how secure it needs to be fixed. The unit is supplied with two thin screws and two normal rawlplugs - if fitting this to a plasterboard ceiling then I would recommend suitable plasterboard rawlplugs. The reason that it is quite heavy is that it requires four C4 batteries: if it did come loose from the ceiling it could quite easily injure someone standing beneath it. I also believe that the instructions could be clearer: they rely on diagrams and actually opening the unit to fit the batteries requires removing a plastic screw and then turning the lamp unit to release it from the "base". Whilst the screw came out easily, separating the lamp from the "base" required quite a bit of effort to turn it and diagrams alone are in my opinion insufficient guidance. Of course once you have figured out one lamp - a second is much easier.

If therefore you are considering this - remember that it needs four large batteries at an additional cost of around £7. I chose this unit as it is recommended for lighting a shower: would I buy another - no - not without first looking further to find an alternative.

mark a
5.0 out of 5 stars Great light for illuminating inside of a cupboard (if the light sensitive diode is removed)
Reviewed in the United Kingdom on 4 August 2017
Colour: WhiteSize Name: 1-PackVerified Purchase
We got two of these for cupboards. They are great as a means of illuminating the interior of the cupboards (but nb. you have to remove the diode that controls the light sensor - when you remove the back it can be pulled out with thin pliers (small black oblong). If you don't remove the diode we found the light didn't always turn on because the cupboard wasn't dark enough - we wanted it to always react to movement and turn on whenever you opened the cupboard no matter what the light level outside. With the diode removed it works fine - very happy with it.
Read more
8 people found this helpful
Report abuse

MH
5.0 out of 5 stars A brilliant light in both senses of the word
Reviewed in the United Kingdom on 17 October 2016
Colour: WhiteSize Name: 1-PackVerified Purchase
The low-set keyhole of my front door mortice lock is in deep shadow in my porchway at night. I'd been meaning to put a light in for years, but getting an electrician or doing wiring yourself is such a hassle, for something small. Voila, white LED's solved my problem. I will, for about the third time in an Amazon review, draw people's attention to the three brilliant Japanese scientists whose work led to these gadgets and a well-deserved Nobel Prize. Credit is also due to the engineers who eventually made the white LED mass produceable and affordable. It's good to include the designers at Mr. Beams for praise too. This is a brilliant light (in both senses) and while a little expensive, it's much cheaper, again, than getting in an electrician. The light solves my problem with the keyhole perfectly, and indeed illuminates the whole (small) porch more than adequately. Be careful to place it, as I did, carefully so the shadow of your own body blocks the light as little as possible, if like me you are concerned about a particular feature such as a keyhole. However, the general feeling of cheer, to have a dark enclosed porch illuminated on your arrival, is also good in itself. The light does not seem to come on unnecessarily often ... my porch has no door of its own, and is about 15 feet from people passing on the pavement. Also, the light switches off quickly when nearby motion ceases, in particular when I close the door. The only small criticism: the supplied screws are not fantastic, so be prepared to have some better screws ready if you end up chewing the heads with a power screwdriver as I did. Or just be particularly careful. Very glad I bought this in time for winter. The instructions are good, and apart from the debatable screws, assembly and fitting is easy. The plastic is rather good quality and should be durable in an outdoor position, but protected from rain and the worst of winds, as in my case. I don't think it's intended for full outdoor use and am not sure it would be 100% waterproof ... but that's not the brief here, just letting people know. As noted in the product description, it doesn't come with batteries, and I am trying 4x C-cell "hybrid" NiMH rechargeables. If I get a chance, I will report on the battery life I get.
Read more
4 people found this helpful
Report abuse

Amazon Customer
5.0 out of 5 stars Good beam, easy to install, works perfectly
Reviewed in the United Kingdom on 9 January 2020
Colour: WhiteSize Name: 1-PackVerified Purchase
This is very simple to install - simply drill two holes, whack in your rawlpugs or spitz and off you go. I was worried about the weight from reading other reviews, but mine is fitted into a plaster board panel above my porch, and with the right fixings it's solid, no worries about it falling.
At first I fitted in the centre of my porch, but it was being set off from the pavement 6 feet away, so I pushed it back towards the back of the porch so the sensor was partially covered by a bit of wall and now it only comes on when I step on to my path.
It has a bright beam without being too much, and works every time. I'll see how the batteries last but so far I'm impressed. No more fumbling getting keys into my lock when I get home from the pub. :-)

John L Langley
5.0 out of 5 stars Excellent Product which works well....
Reviewed in the United Kingdom on 7 December 2019
Colour: WhiteSize Name: 1-PackVerified Purchase
I bought one of these to fit in our dark porch having become very annoyed/frustrated fumbling to find the correct door key and then locate it in the keyhole after dusk having failed to switch on the mains powered porch light upon leaving to go out in the daylight !
Very pleased with the MB980, it is very well designed, of high quality and it works well in our application.
(Whilst it is not claimed to be suitable for outside use I am pretty confident that it will give lengthy service installed up in the ceiling of our porch where it is protected from the elements.... ).
We already have several Mr Beams MB720's which we take away on holiday for use for night time hotel bathroom visits which we are similarly very pleased with. In MB720's a set of batteries seem to last in the region of 1-2 years. I am optimistic that the batteries will last a similar length of time in the MB980 - although the LED light is higher powered, it uses C cells which are of higher capacity also.

Read more
Report abuse
See all reviews
Pages with related products. See and discover other items: Best Rated in Ceiling Lighting
Get FREE delivery with Amazon Prime
Prime members enjoy FREE Delivery and exclusive access to movies, TV shows, music, Kindle e-books, Twitch Prime, and more.
> Get Started
Back to top
Get to Know Us
Make Money with Us
Let Us Help You
And don't forget:
© 1996-2020, Amazon.com, Inc. or its affiliates