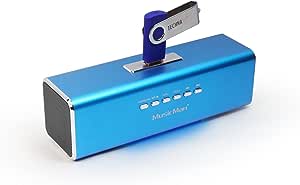 Brand: Music Man
3.9 out of 5 stars 5,076 ratings
Secure transaction
Returns Policy
Amazon-managed Delivery
Your transaction is secure
We work hard to protect your security and privacy. Our payment security system encrypts your information during transmission. We don’t share your credit card details with third-party sellers, and we don’t sell your information to others. Learn more
Amazon-managed Delivery
Amazon manages delivery by using preferred couriers/agents. Order delivery tracking to your doorstep is available 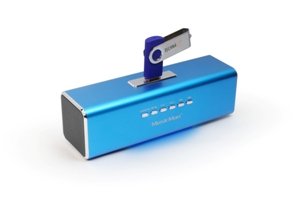 The sleek bar-shaped Stereo Soundstation is available in five luminous metallic shades of black, silver, blue, green and pink. Fitting neatly in your bag or comfortably in your hand, this portable sound system can go with you to work or college and at just over 200g it won’t weigh you down. The latest version comes WITH PROTECTION GRID on both sides to protect the loudspeaker membrane while transporting your MusicMan MA Soundstation. This vibrant, high quality MP3 Player / loudspeaker is a dream for those wanting to travel light without needing to leave the essentials behind.

The small (160 mm x 50 mm x 50 mm) portable (212 g) stereo broadband Soundstation MusicMan MA by Technaxx is a rechargeable audio device producing loud, clear stereo sound which defies it's compact size. It has a strong and clear bass response, allowing you to enjoy your music as it should be heard. You'll be very surprised at the great sound quality coming from this soundstation.

The MusicMan MA comes with an integrated MP3-Player, FM Radio, USB slot, Micro SD slot and AUX / Line-In function and has two integrated stereo loudspeakers. This compact speaker has a choice of input sources. The line-in input sensitivity means you can play music, videos and online radio from your smartphone, laptop or tablet by connecting the lead included. Or insert a MicroSD card of up to 32 GB and listen to your latest downloads. If you don’t have any external devices to hand, you can tune in to the built-in FM radio and catch up on what’s happening in the world. With a 600mAh capacity built-in lithium-ion battery (charged via the USB cable included), you can go to the beach or the park without worrying about being near a power supply. You can even increase the run time further by adding an external battery pack (not included). 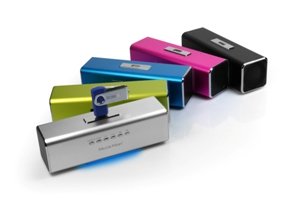 With portability, great sound quality, multiple sound source options, and compatibility with a wide range of devices, the MusicMan MA from Technaxx is the perfect playtime accessory.

3.9 out of 5 stars
3.9 out of 5
5,076 global ratings
How are ratings calculated?
To calculate the overall star rating and percentage breakdown by star, we don’t use a simple average. Instead, our system considers things like how recent a review is and if the reviewer bought the item on Amazon. It also analyses reviews to verify trustworthiness.

Alan Miller
3.0 out of 5 stars Well made, but 'shuffle' function leaves a lot to be desired
Reviewed in the United Kingdom on 2 November 2016
Colour: SilverStyle: Musicman MA with DisplayVerified Purchase
I've had one for about 5 months now and - so far at least - it's survived quite well - including a holiday, two camping weekends and daily carrying to and from work. It seems to be well made, although pressing the pause button can sometimes alter the mode (go figure on that one...). The sound is good and clear enough for background in a 40x20ft office.
I power mine from a USB adapter, so can't comment on battery life.
Similarly, I haven't tried the FM radio - I didn't buy the MM for that particular function.
BUT
I have an issue with the 'random/shuffle' play back function when using a USB stick.

It has, Dear Reader, a very strange definition of the word 'random'

It's driving me nuts! :) Don't get me wrong... I like tracks 1, 14, 511 etc, but I have 500+ other tracks on the USB for a reason! :)
A different day/USB stick will give me a different starting 'block' as it were, but still give the repeating issue.
The USB stick used for this example has over 500 MP3s (30hrs+) on it, all in one folder and works fine (random play) on my laptop.
It's not the USB either as I've tried different types and had the same problem. Putting the tracks in multiple folders just complicates matters further with the MM only seeing one folder...!
I can get a proper random function with my (SanDisk) MP3 player plugged in, but then the MM is simply being used as speakers for the SanDisk anyway!

This repeat/repeat is an annoyance for me (you can tell that, can't you...) and spoils an otherwise well made piece of kit.

As an aside, the metallic coloured version, while it may appeal, masks the labelling of the controls. Once you're used to them, its not an issue, but having to continually tilt the player to the light to read the labelling when new and unfamiliar can be a niggle. It wouldn't have hurt to have the labelling printed in black ink.

Anyway... would I recommend? Well, yes but with the caveats mentioned here.
Three stars as it's well made and gives a clear volume - but because of (for me) the poor shuffle function, I can't give any more than that.
Read more
26 people found this helpful
Report abuse

Miguel
1.0 out of 5 stars What a Let Down
Reviewed in the United Kingdom on 11 August 2018
Verified Purchase
Very disappointed with this item, it ,came with Russian menu and even the settings couldn't change it, instruction leaflet was very small font and a download in PDF did not explain all, contacting the company in Germany was easy enough but their reply in German was a waste of time, I found the information screen too was too small and I know it's only a small unit but there are better around for less money, the volume was far too low even at full blast, random play was ineffective,this unit I noticed was dated quite a few years back too...all in all...for £27 very disappointed indeed...so it's been returned...thank goodness for Amazon
Read more
4 people found this helpful
Report abuse

Andromeda's Twin
2.0 out of 5 stars Inserting the battery was nigh on impossible
Reviewed in the United Kingdom on 11 January 2019
Verified Purchase
The battery compartment lid required the use of a jewellery screwdriver to prise open, after the battery was finally inserted I met the next challenge, finding how to change the German menu to English, that was frustrating and I only got it right by pure chance, very hit and miss, it would probably help if you speak German, then you would be able to change it no bother, but you would not have to of course, as you'd be able the menu anyway!
The unit is now on charge, plays music from my usb, settings all seem to work ok, music quality was reasonable, as I'd expect from such a tiny unit.
No idea on battery life as the battery is not even charged yet.
Ease of use, however, is BAD.
This unit is the absolute opposite of the MusicMan TXX3551 - with ipod dock, which is sadly now unavailable.
Read more
2 people found this helpful
Report abuse

Freestyla
3.0 out of 5 stars Do not use a memory stick with it
Reviewed in the United Kingdom on 21 July 2017
Colour: PinkStyle: Musicman MA with DisplayVerified Purchase
Nice little speaker but the software on this unit is horrific and buggy, starts in german (easy to switch to English or other languages) but it constantly reboots and then corrupts the data on USB sticks, have no got an old iphone 4 plugged into it that was collecting dust and my 6 year old loves it, if you are buying this as a standalone unit think twice.
Read more
8 people found this helpful
Report abuse
See all reviews
Get FREE delivery with Amazon Prime
Prime members enjoy FREE Delivery and exclusive access to movies, TV shows, music, Kindle e-books, Twitch Prime, and more.
> Get Started
Back to top
Get to Know Us
Make Money with Us
Let Us Help You
And don't forget:
© 1996-2020, Amazon.com, Inc. or its affiliates