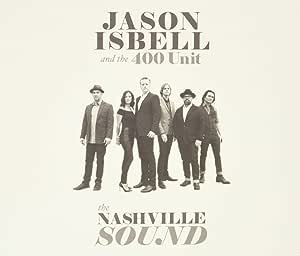 The Nashville Sound is the follow up to 2015's critically acclaimed Something More Than Free, which won two Grammy Awards (Best Americana Album & Best American Roots Song, 24 Frames) and two Americana Music Association Awards (Album of the Year & Song of the Year, 24 Frames).

Without exaggeration, Jason Isbell has become one of the most respected and celebrated songwriters of his generation. He possesses an incredible penchant for identifying and articulation some of the deepest, yet simplest, human emotions, and turning them into beautiful poetry though song. Isbell sings of the everyday human condition with thoughtful, heartfelt, and sometimes brutal honesty, and the new album is no exception.

4.8 out of 5 stars
4.8 out of 5
895 global ratings
How are ratings calculated?
To calculate the overall star rating and percentage breakdown by star, we don’t use a simple average. Instead, our system considers things like how recent a review is and if the reviewer bought the item on Amazon. It also analyses reviews to verify trustworthiness.

Neppo
4.0 out of 5 stars Slow burner
Reviewed in the United Kingdom on 11 October 2017
Verified Purchase
It's been a slow burner for me, this one, and I still don't think it reaches the heights of the previous Jason Isbell albums. I skip Cumberland Gap.
Last Of My Kind and Tupelo are the standout tracks, and being at the beginning, it seems as if the album struggles in the latter half.

It's a good enough album, but there are no tracks like Children Of Children that make you stop what you are doing, find a place to play it five times over before reaching for the whiskey bottle and diving into other country baggage, only to emerge the next day to find the dinner you were cooking yesterday is still half prepared on the chopping board in the kitchen. There are none of those songs here, but maybe next time there will be.
Read more
5 people found this helpful
Report abuse

therealus
5.0 out of 5 stars More excellent music
Reviewed in the United Kingdom on 14 August 2017
Verified Purchase
Yet another superb set by Jason Isbell. Inhabiting the intersection point between folk, rock, country and blues perfectly, he shifts seamlessly between the four on the first tracks without leaving any behind completely. Whilst all the songs are recognisably Isbell, with the same transitions between contemplation, rage and regret, they’re also definitely different from their predecessors. Some clearly reflect his new status as a father, and one, If We Were Vampires, possibly rebounds off that in being a reflection on mortality. On most of them Isbell’s voice has a clear bite; there’s none of the trace of Paul Simon I’ve noted before.

The opener, Last Of My Kind, sees Isbell in folky, reflective mood. He grinds through all of the gears after that into the rocking Cumberland Gap, and then shifts down a touch for the country flavoured Tupelo.

Isbell’s songs in the past have touched me deeply, but none probably as the fourth track, White Man’s World. PBS’s review made much of the words themselves, depicting them as a realisation of unwitting culpability in the perpetuation of racism and sexism. The words are complemented to the point of intensification by the music, both the bluesy riffs and, as a bitingly poignant enhancement, by Amanda Shires’s fiddle. Since I first heard her playing I have been a shameless admirer, but her playing here seals it for me, going beyond anything she’s done before in terms of emotional edge. PBS’s view that this song marks Isbell’s entry into political comment is not quite right, though. His earlier song TVA, for example, praises Keynesian-style state intervention, and in Dress Blues he sneered at Hollywood wars.

A couple of tracks on is Anxiety. When I reviewed Isbell’s previous album, Something More Than Free, I wondered if he was shifting into prog music with the use of mellotron, and the PBS reviewer noted that shift too on this new track. It also has a rollicking coda reminiscent of that from Decoration Day back in Isbell’s time with DBT. The one that follows, Molotov, is an admission that he’s forsaken his wilder days, and he wonders if he still retains any of the excitement of the past (I’d say yes). There are a couple of great lyrics in this one, once where he rhymes “three wishes” with “facetious”, the other where he confesses to breaking a promise to himself to “ride the throttle till the wheels came off”.

Something To Love is the perfect finale, folky, gentle and one of the best expressions of “Best Wishes” you could hope for.

Looking forward to the Roundhouse in October!
Read more
One person found this helpful
Report abuse

P.KELLY
5.0 out of 5 stars yet if anything JI has produced his best album yet
Reviewed in the United Kingdom on 3 December 2017
Verified Purchase
The two preceding albums were always going to be hard acts to follow, yet if anything JI has produced his best album yet. This album ebbs and flows nicely, with a well balanced mix of upbeat and lower tempo songs, as well as having a few songs where he lets loose a bit and gives us some heavier moments – such as “Cumberland Gap” and “Anxiety”. It is difficult to choose favourites as the consistency is so good throughout but if pressed I would say the previously mentioned songs and “White Man’s World” edge it, together with the opener “The Last of Our Kind” and closer "Something to Love".. Lyrically these songs are up with his best, and I love the lyrics of WMW. It is that time of year where people are considering their “best album of the year”, and in a very good year this is a strong contender.
Read more
3 people found this helpful
Report abuse

John of Hampshire
5.0 out of 5 stars Their best work yet.....
Reviewed in the United Kingdom on 16 July 2017
Verified Purchase
Great album from a band that has reached the highest point so far of their music writing capabilities, with such a varied, diverse mix of songs. These will become staples of their live shows, with them being one of the best live acts out there.
Good to hear that Jason has also pushed both the fiddle & vox of his wife Amanda more prominently into the production mix, as I'm sure that works best, not only on a personal basis, but also on the basis of the finished recordings. They sound great.
Don't get hung up about this album if 'country twang' is not your thing; this album most certainly does not pigeonhole itself roundly within that musical genre stereotype.
Go check it out, then sit back & enjoy it for what it is; a great hand-crafted record.
Read more
2 people found this helpful
Report abuse

Alan
5.0 out of 5 stars Magnificent
Reviewed in the United Kingdom on 7 January 2018
Verified Purchase
I'd heard odd tracks by Jason Isbell before but never sat down and enjoyed a whole album at a sitting before. My loss, it transpires. A mix of songs and styles reflecting modern living in modern America, from the crushing of hope in Cumberland Gap, to the confusion expressed through 'Last of my Kind'. And if you aren't moved by the emotion of 'If we were Vampires' you may not actually be alive. In all, it's a magnificent album and I'm just sorry I didn't buy it sooner
Read more
One person found this helpful
Report abuse
See all reviews
Back to top
Get to Know Us
Make Money with Us
Let Us Help You
And don't forget:
© 1996-2021, Amazon.com, Inc. or its affiliates