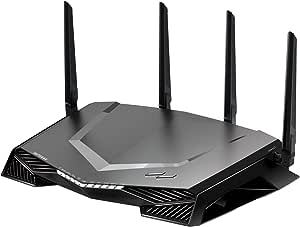 Visit the NETGEAR Store
4.8 out of 5 stars 70 ratings
Available from these sellers.

The XR500 Nighthawk Pro Gaming WiFi Router uses state-of-the-art software to optimise your internet connection by stabilising ping, reducing lag spikes, and keeping you in the game with reliable wired and wireless connectivity for fast-paced gaming.

4.8 out of 5 stars
4.8 out of 5
70 global ratings
How are ratings calculated?
To calculate the overall star rating and percentage breakdown by star, we don’t use a simple average. Instead, our system considers things like how recent a review is and if the reviewer bought the item on Amazon. It also analyses reviews to verify trustworthiness.

Dave
4.0 out of 5 stars Nice device, promises much, but a few issues
Reviewed in Australia on 24 June 2019
Verified Purchase
This is a nice looking router and it promises much. I didn't see a reference to it in the few items of paperwork that come with it, but there's actually a decent user manual on the Netgear website. Download it in advance to a PC so you can refer to it during the installation process, when you won't have wifi. I wish that there had been some clear instructions on setting it up for the NBN - perhaps Netgear can send clear instructions with screenshots, to Internode?

We haven't seen the speed boost that we were hoping for, but we think it maybe more reliable than our connection through our previous device. We've also found that some of the features aren't useful for console gaming - attempts to set up the Geo-filter results in in-game errors with matchmaking. It's fine for PC gaming and the Ping functionality works for the PC in that case. I've also had to set up Port Forwarding for each console so that in-game chat works - those Toledo errors crop up for the XBox One.

Finally, coinciding with the changeover to this router, we found that our catch-up TV apps mostly stopped working through the Samsung TV and the consoles. This probably reflects something about how the apps are built for local TV channels, but still it's a frustration. One catch-up app works, as well as Amazon Prime, Stan and Netflix. If there's a fix I'd love to know - hours of googling hasn't identified something that works for us.

The Duma OS interface is nice. (A bit of playing around to work out how to customise the dashboard - you actually do it through the specific pages. Pinning a box makes it appear on the dashboard.) Frustratingly it repeatedly asks for the username and password and strangely Chrome doesn't give me an option to save it. Occasionally it gives errors and displays a blank screen.

Be aware that if you change routers, and even use the same SSID and password, you will still need to go into every device and re-enter the details (or forget the network and re-enter it). That includes every wifi connected light bulb, your solar inverter, every mobile device, TV, DVD player, etc! Found out that we have about 35 devices and the whole process took 5-6 hours (at least). The DumaOS gives you an option to clearly label what they are and how they're connected once you've gone around the house matching MAC addresses, which has been nice and handy. Once labelled, a chart shows you what each of the devices is downloading or uploading, which is an eye-opener.

Do I like it - YES. But I wish I'd seen a nice speed boost to justify the expense.

Daniel
5.0 out of 5 stars Fantastic Router
Reviewed in Australia on 19 February 2019
Verified Purchase
Fantastic Item for anyone on the NBN. Given the average family has minimum 11 devices connected on the network this item is a MUST BUY. Not only does the free network monitoring app make data nerds like me smile, its also presented in a very tech friendly easy to understand language. Really Really Recommend to all.
Read more
4 people found this helpful
Helpful
Comment Report abuse

Azikhu
5.0 out of 5 stars Great for gaming
Reviewed in Australia on 3 July 2020
Verified Purchase
Great router if you have good internet bandwidth... Since upgrading my internet, this router has become a beast! Does a great job at prioritising two PS4s and multiple people streaming at the same time.

I switched to my older router since upgrading my internet and there was a significant difference in lag and signal connection. Definitely recommend if you have the internet to support it, otherwise it won't fix your problems.
Read more
Helpful
Comment Report abuse

Conor
5.0 out of 5 stars For serious gamers
Reviewed in Australia on 11 December 2019
Verified Purchase
This router is a massive step up from the default router provided to me by my ISP. Being a massive gamer I love being able to direct more traffic to my PC and PS4 as well as being able to see what devices are hogging all of the network traffic. The reason I bought this router is I was receiving huge lag spikes in my online games due to others on my network streaming and downloading. I no longer get lag spikes and am able to be in more control of my network. I recommend this router for anyone serious about gaming and has others on their network who enjoy streaming tv shows and movies or like to download anything and everything.
Read more
One person found this helpful
Helpful
Comment Report abuse

RavinusGamer
5.0 out of 5 stars Lightning!
Reviewed in Australia on 27 July 2019
Verified Purchase
Having just migrated from ADSL2+ to a NBN FTTC connection, I needed an equally performing router to get the most out of the connection. The NETGEAR® Nighthawk® Pro Gaming WiFi Router AC2600 (XR500) was the perfect solution. I can stream, play and watch without interruption and love having the best equipment to support me. Thanks Netgear, another win!
Read more

CJ
3.0 out of 5 stars A generally good experience
Reviewed in Australia on 30 December 2019
Verified Purchase
Nice router and really like the interface.

However, I had all sorts of trouble getting a couple of ubiquity loco M5 nanostations to work with this router. The router would not recognise them as being plugged in and available on the initial IP those devices come with, no matter what I tried. Ended up trying with another Netgear router (R7000P) and the devices were accessible immediately.

This means I had to change what I was intending to use the device for, which was an annoyance.
Read more
Helpful
Comment Report abuse

Ali C.
5.0 out of 5 stars Awesome router!!
Reviewed in Australia on 18 April 2019
Verified Purchase
This router saved our marriage. We were constantly fighting because of internet at home and I couldnt game when my watched netflix. All our problems solved with this.
Read more
3 people found this helpful
Helpful
Comment Report abuse

Dan
5.0 out of 5 stars Great router
Reviewed in Australia on 11 September 2019
Verified Purchase
Snagged this on sale it has not dissapointed. Wi-Fi cover is on point and I have had zero drops. The software is a cool plus as you can see exactly what is going on and monitor your speeds/latency. For NBN fibre to the premises, it has been solid.
Read more
One person found this helpful
Helpful
Comment Report abuse
See all reviews
Pages with related products. See and discover other items: Best Rated in Routers
Get FREE delivery with Amazon Prime
Prime members enjoy FREE Delivery and exclusive access to movies, TV shows, music, Kindle e-books, Twitch Prime, and more.
> Get Started
Back to top
Get to Know Us
Make Money with Us
Let Us Help You
And don't forget:
© 1996-2020, Amazon.com, Inc. or its affiliates