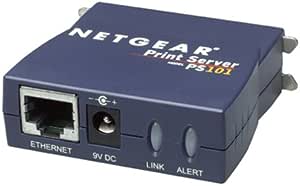 The Netgear Pocket Print Server lets you share your printer connection with everyone in the office—without having to leave on your PC. It runs at up to 10 Mbps, supports simultaneous print jobs, and can be managed using a remote Web-based tool. Features an on-board memory buffer that gives you quick printout delivery, an Alert LED light that lets you know the status of your print job, and it's upgradeable. Includes installation software.

3.3 out of 5 stars
3.3 out of 5
29 global ratings
How are ratings calculated?
To calculate the overall star rating and percentage breakdown by star, we don’t use a simple average. Instead, our system considers things like how recent a review is and if the reviewer bought the item on Amazon. It also analyses reviews to verify trustworthiness.

MT
2.0 out of 5 stars Failure Rate Too High; NetGear Won't Replace
Reviewed in the United States on 20 April 2004
Verified Purchase
I have to say that I'm not at all impressed by this product. I originally got it because of its size (it's relatively small), and the fact that I have an older laser printer with a parallel port interface (HP LaserJet 6P).
My main problem with the product has been its unreliability to complete a print job. Whatever I send to the printer, I have about a 50% chance of actually seeing output. That drops to around 10%-20% if two or more jobs are being sent concurrently (what's the point of having a print server if one can't print more than one thing at a time?). I should note that this happens whether printing from Windows 2000, OS X or Linux (lpr or CUPS).
My hunch is that printer support is iffy, but one is hard pressed to find out from NetGear which printers work and which don't. Unfortunately experimentation is often the only route. I'm pretty sure the printer is fine, as when I use a computer to share the printer (via printer sharing), I never lose a job and everything works well.
Losing jobs wouldn't be such a pain if all printing was done from the same room as the printer (since it would be easy to tell when something needed to be printed again). However, in our household, we have two wireless laptops, and it's a pain to have to always walk into the office to make sure the print job got through right away rather than just being able to rely on it getting done to be picked up later.
Another complaint I have is that the unit seems to lose its configuration quite regularly. I find that if I power cycle it, I have about a 20% chance that it will reset to factory defaults. This is a pain for me, since I print from OS X and Linux which both like to have a static IP for the printer. When the unit resets, it loses its IP address, and all of a sudden I can't find the printer.
The only reason I didn't give this product one star is because when it doesn't lose my print job and actually retains its configuration, it actually works semi-well.
Overall, if you're like me, and you don't like constantly tweaking, prodding, goading, etc. to get something to work, or you might be printing from outside the immediate vicinity of the printer, I would spend the extra money and desk space and get something that works reliably.
Read more
6 people found this helpful
Report abuse

Tom W
4.0 out of 5 stars Easy to install, works great
Reviewed in the United States on 10 July 2003
Verified Purchase
Since there were no reviews for the NetGear PS101 and reviews for the other vendor's offerings were fairly negative with a lot of pitfalls encountered, I expected to have some problems when I started. However, within an hour of opening the box, I had the print server up and running on 4 PCs, 3 with XP, 1 with Win/98. It works much faster than sharing the printer off a "server" PC, and print quality isn't impacted at all. The documentation is fairly clear and complete, although somewhat misleading where it talks about what port to use due to the use of bold versus normal font. The adiministration screens are OK, could be much better, and I can't figure out how to upgrade the firmware if I ever decide to do so.
Be careful on PCs with the printer already defined as remote to the "server" pc. Windows wants to configure the printer as another remote one and not as a "local" one. Going into the Windows define printer screens directly or first deleting the remote definition resolves this issue.
If you're using a firewall (like Zone Alarm), make sure you allow access or nothing will work.
Read more
6 people found this helpful
Report abuse

R. H.
5.0 out of 5 stars HP Laserjet 1100A required me to acquire this device.
Reviewed in the United States on 8 January 2013
Verified Purchase
For whatever reason, the HP Laserjet 1100A used a different, none standard printer cable connector, and it did not offer the standard type at all.

From time to time, updates in Windows or other drivers would make the HP not work well. This device allows me to link the HP 1100A to the network and print from most of the computers.

This device allows me to keep the Laserjet a tad longer - until I eventually just get rid of it.
Read more
Report abuse

Mark E. Johnson
1.0 out of 5 stars AVOID LIKE THE PLAGUE
Reviewed in the United States on 15 July 2007
Verified Purchase
In the span of less than 60 minutes, this device drove me to drink.

It will work with a Mac, this is true. I got it to print. Once. But you need a Windows machine to actually set it up, which my wife has just feet away from my Macs. So we ran the software that came with it ... and it cooked XP.

So I called tech support. After 26 minutes and three transfers to different support reps, two of whom spoke a variation of English that is not compatible with mine, where all I wanted to know was, "DOES THIS WORK WITH A MAC?" I was told, no. EVEN AFTER I GOT IT TO WORK!

I gave up at that point ... I'm just going to get a longer USB cable for my printer and use the share printer option on one of my Macs. If we can ever resurrect the XP box, that is ...
Read more
One person found this helpful
Report abuse

Craig Edward Given
1.0 out of 5 stars Went through 3 of these. They kept burning out ...
Reviewed in the United States on 15 July 2014
Verified Purchase
Went through 3 of these. They kept burning out after a month or two. I managed to keep the 3rd one alive by unplugging it except at the moment I needed to print. Once all the kids made it through high school, I didn't bother replacing the last one and put the money to a networked printer instead.
Read more
Report abuse
See all reviews
Back to top
Get to Know Us
Make Money with Us
Let Us Help You
And don't forget:
© 1996-2021, Amazon.com, Inc. or its affiliates