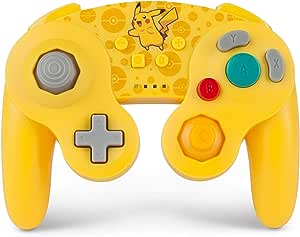 Fastest delivery: 8 - 11 Feb
Ships from and sold by Amazon UK.

4.6 out of 5 stars
4.6 out of 5
743 global ratings
How are ratings calculated?
To calculate the overall star rating and percentage breakdown by star, we don’t use a simple average. Instead, our system considers things like how recent a review is and if the reviewer bought the item on Amazon. It also analyses reviews to verify trustworthiness.

Trilobite
2.0 out of 5 stars Feels EXACTLY like the GC controller, developed a squeak and slight drift.
Reviewed in the United Kingdom on 1 August 2020
Verified Purchase
I received one of these Purple Gamecube-style controller for Christmas, because in my mind the original GC controller was the most ergonomically comfortable controller ever developed. By May my controller had developed a bit of an annoying squeak on the right thumb stick, and by July it had started to drift, ever so slightly, downwards.

I managed to get a replacement (though not in the beloved GameCube purple, so I now have a bright yellow Pikachu replacement. It’s hardly my choice of styling, but at least I can find it in a dimly lit room!)

The customer service from the makers is pretty fantastic, and the unit is robust and well made. Despite the troubles I had I would not hesitate to buy another, simply because the sturdiness of the controller and customer service when I *did* have an issue were both so good.

Amazon Customer
5.0 out of 5 stars Best controller I've had!
Reviewed in the United Kingdom on 18 July 2020
Verified Purchase
This controller is amazing! But there are some cons as well...

Cons:
No internal battery
No HD rumble or any rumble at all..
No amiibo functionality (not a big deal)
No analog triggers..
Switch fails to read the battery left (minor but it's because of the external batteries)

Rachel L.
5.0 out of 5 stars Blast from the past! The perfect controller option for those uncomfortable with the Pro Controller.
Reviewed in the United Kingdom on 10 November 2019
Verified Purchase
Power A, Pikachu Gamecube Style Controller 2019

First off, I wasn't expecting much from this having seen the mixed reviews here. Secondly, I hated the Pro Controller, I found it both too heavy and too uncomfortable and stiff for my liking.

So I got this today and was quite surprised about the build quality! It feels exactly like a gamecube controller, but its plastic and texture reminds me more of the Wavebird controller which is the best controller nintendo has ever made. But where the wavebird was bulky, this is far from it (due to the technology to allow wireless controllers to work has now been made smaller and cheaper.)

The wireless is made possible by Bluetooth connection, it was very easy to set up with the switch (please note the switch has to be updated to 6.1 to work with this.) Went into the switch controllers and change grip option, pressed the bluetooth button on top and it instantly recognises it. But it recognises it as a pro controller oddly? Not arguing as this means it works with most games (the ones with the pro controller icon on the back of the case/box).

Now for some pros and cons...

Nostalgic! Any kid turned adult that grew up with the gamecube controller will instantly get along with this. That style is the best for Super Smash Bros Ultimate and it shows here. The buttons are exactly how you'll remember it and the weight and feel is exactly how I remember the GCN controller being.

No lag! Now granted, nothing will replace a wired GCN controller as there is zero lag with that and when in contests, those extra milliseconds count. But for a casual user, there is no lag, no input lag, nothing. Very responsive.

The buttons! Some people have complained about how clicky the buttons are, but personally, the old GCN controllers were exactly the same. And it is a satisfying click, especially the triggers. The feedback from the sticks is great, the triggers too are great to use. Love how they put the +, -, home and snap button on the front too.

Beautiful designs. The controller I bought was the Pikachu one and it goes brilliantly with the Pokémon Lets Go console. Love how buttons are exactly how the old GCN controller was (except for the purple Z button. Which is now the R button, its coloured yellow to match.)

Full motion controls. I wasn't expecting this and was surprised to see it and see it working so well. Great for games like Mario Kart 8 Deluxe and Luigi's Mansion 3.

Lack of a few features. Now I will mention this in passing, but I will say I do not see this as too much of a con. There is no HD rumble, IR and no NFC/Amiibo support. But if you, like me, wasn't too bothered by this then it doesn't matter. If it does, bare that in mind.

Batteries. When I said blast to the past, that doesn't mean we need to go back to the days of battery eating controllers. But at £29.99 then I can see why, putting a usb rechargable battery in it might have put the price up higher. So again, bare this in mind, however it does come with two batteries so that's good.

mm
1.0 out of 5 stars this is very poor quality
Reviewed in the United Kingdom on 27 May 2020
Verified Purchase
we have 4 gamecube and this one started to misimput after couple of months. its now 7 months of very occasional play ( few times a month) and its going to bin
Read more
Report abuse

Amazon Customer
5.0 out of 5 stars Controller
Reviewed in the United Kingdom on 8 September 2020
Verified Purchase
Good product. Happy son.
Read more
Report abuse
See all reviews
Get FREE delivery with Amazon Prime
Prime members enjoy FREE Delivery and exclusive access to movies, TV shows, music, Kindle e-books, Twitch Prime, and more.
> Get Started
Back to top
Get to Know Us
Make Money with Us
Let Us Help You
And don't forget:
© 1996-2020, Amazon.com, Inc. or its affiliates