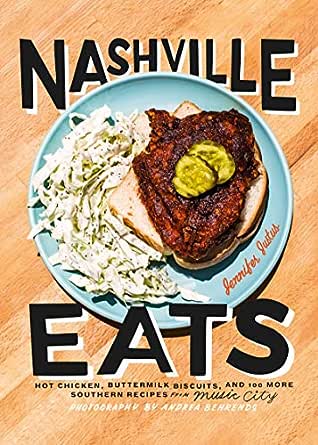 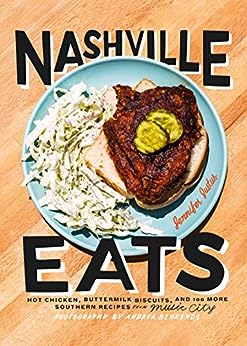 "Nashville Eats perfectly captures the spirit of Music City. It's an incredible collection of recipes that makes you want to spend as much time as possible in Nashville."--Sean Brock, chef and author of Heritage

"A love letter to the working class cooking of Nashville, a crack at codifying the foodways of middle Tennessee, an homage to fabled locals like hot chicken queen Andre Prince Jeffries, a roster of recipes that includes a Kitty Wells-inspired orange and coconut cake: Nashville Eats by Jennifer Justus is a well-honed cultural passkey to one of America's great culinary cities."--John T. Edge, coeditor, Southern Foodways Alliance Community Cookbook

"I wouldn't dream of going out to eat in Nashville without consulting Jennifer Justus first. The lady knows from tasty and I know I won't waste a single bite on her watch. Problem is, I don't get down there nearly as often as I'd like, so Nashville Eats is a blessing. In it, she's bringing home the flavor of the city she loves, and the stories behind the recipes are just as satisfying as the dishes they produce."--Kat Kinsman, editor in chief of "Tasting Table"

"Learn how to make Music City's famous hot chicken at home, along with regional dishes like buttermilk biscuits, pulled pork sandwiches, fried green tomatoes and chess pie. Alongside 100 Nashville recipes, author Jennifer Justus shares her personal stories of the city--the people, music, history and food that make the city so special."--Food Republic --This text refers to the hardcover edition.

Jennifer Justus, the former culture reporter at the Tennessean and author of The Food Lovers' Guide to Nashville, is an expert on Southern food. Her work has appeared in Southern Living, Cornbread Nation: The Best of Southern Food Writing, Imbibe, and more. Justus blogs at a nasty bite, an expression her grandmother used to describe a simple meal. --This text refers to the hardcover edition.

4.6 out of 5 stars
4.6 out of 5
88 global ratings
How are ratings calculated?
To calculate the overall star rating and percentage breakdown by star, we don’t use a simple average. Instead, our system considers things like how recent a review is and if the reviewer bought the item on Amazon. It also analyses reviews to verify trustworthiness.

Mrs. Joyce Wheeler
5.0 out of 5 stars Master chef watch out!
Reviewed in the United Kingdom on 30 December 2016
Verified Purchase
My son in law was delighted.
Read more
Report abuse

Scottie
4.0 out of 5 stars Great book, great present, only 4 stars because of damage
Reviewed in the United Kingdom on 3 July 2017
Verified Purchase
Beautiful book, hardback, lots of great recipies, unfortunatly the hardback was damanged when I received and it was a gift, but I doubt this will effect the cooking!!
Read more
Report abuse

Ellie Brown
5.0 out of 5 stars DO NOT READ THIS WHEN YOU'RE HUNGRY
Reviewed in the United States on 8 February 2021
Verified Purchase
Close as I live to Music City -- well, in a neighboring state -- I knew nothing much about the cuisine of that area till a friend posted a pic of something he'd made from the book, and that got my attention. The recipes look fabulous, and I'm going to make the "boozy peached baked in muffin tins" as soon as peaches begin to pop, but get a copy of the book if only for the food history and great prose. You'll be captivated, I promise.
Read more
Report abuse

denise mcwilliams
5.0 out of 5 stars Awesome cookbook
Reviewed in the United States on 4 June 2019
Verified Purchase
This is a great book- wicked fun to read about what you might cook. Great Nashville recipes.
Read more
2 people found this helpful
Report abuse

Heather Scruggs
5.0 out of 5 stars BEST Nashville cookbook!
Reviewed in the United States on 16 April 2018
Verified Purchase
There are sooooo many great recipes in this book! It was on display at a B&B I stayed at. I flipped through it and ordered it immediately
Read more
3 people found this helpful
Report abuse
See all reviews
Back to top
Get to Know Us
Make Money with Us
Let Us Help You
And don't forget:
© 1996-2021, Amazon.com, Inc. or its affiliates