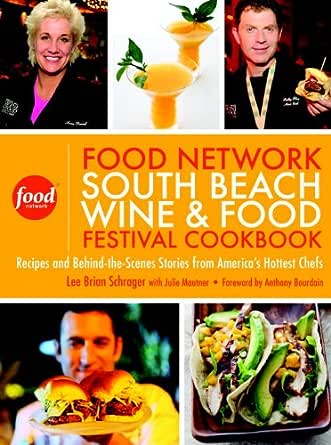 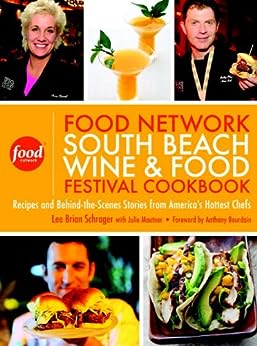 Lee Brian Schrager is credited with creating one of Miami’s biggest tourist attractions, the Food Network South Beach Wine & Food Festival (SoBe, as it is known), which has raised more than $10 million for the Florida International University School of Hospitality and Tourism Management, and the Southern Wines & Spirits Beverage Management Center. Schrager’s Food Network New York City Wine & Food Festival benefits the Food Bank For New York City and Share Our Strength. He is a graduate of the Culinary Institute of America and is a vice president of Southern Wine & Spirits of America, Inc. For more about the festival visit SoBeFest.com.

Julie Mautner was a founding editor of Food Arts. She has written for Travel+Leisure, Food & Wine, Bon Appétit, Wine Spectator, Condé Nast Traveller UK, and Epicurious. She divides her time between the United States and France. --This text refers to an alternate kindle_edition edition.

4.7 out of 5 stars
4.7 out of 5
13 global ratings
How are ratings calculated?
To calculate the overall star rating and percentage breakdown by star, we don’t use a simple average. Instead, our system considers things like how recent a review is and if the reviewer bought the item on Amazon. It also analyses reviews to verify trustworthiness.

Saskafudge
5.0 out of 5 stars Beautiful Book
Reviewed in Canada on 14 May 2014
Verified Purchase
I'll be honest, I haven't tried any of the recipes as of yet, but this kind of really well done cookbook is the kind that inspires you to create. If you like the chefs involved, it's a must have.
Read more
Report abuse

Stella Carrier
5.0 out of 5 stars Bountiful Festival Details, Recipes Etc.
Reviewed in the United States on 22 April 2018
Verified Purchase
As an amateur writer with a prolific writing passion/intent to improve my creativity, I’m intuitively aware that I’m outside the target audience for this kindlebook that is The Food Network South Beach Wine & Food Festival Cookbook: Recipes and Behind the Scenes Stories From America’s Hottest Chefs by Lee Brian Schrager, Julie Mautner, Anthony Bourdain (foreword). However, I have to credit my current job for piquing my interests in kindlebooks such as this and the variety of content in this food festival kindlebook includes among the following; an interview with one of the food festival sponsors Brooke Johnson,some of the most memorable moments such as apparently when the Today show was taped at the festival in 2008, another memorable moment was the reference to the creation of the burger bash with Rachael Ray and apparently it became one of the most popular events, money raised each year from the food festival for wine culinary and hospitality education through Florida International University’s School of Hospitality and Tourism Management, various drink recipes from various chefs such as Sandra Lee, Susan Spicer, Dale Degroff, Tony-Abou Ganim, and much more.
Read more
Report abuse

Timothy B. Riley
5.0 out of 5 stars An entire festival in a cookbook!
Reviewed in the United States on 5 December 2010
Verified Purchase
The South Beach Wine and Food Festival (name-sponsored by The Food Network since 2007) has been a popular Miami event for ten years. To celebrate this milestone, festival founder and organizer Lee Brian Schrager co-authored this cookbook with the help of food writer Julie Mautner, and what a book it is! More than a mere collection of recipes, Mr. Schrager's book captures the carnival-like atmosphere of this celebration of chefs and the food that they prepare.

* A rather self-involved foreword by Anthony Bourdain in which he uses the entire second paragraph to recount the riches of his first "swag bag" of freebies which are given to celebrity participants.

* Introductions to the book and each chapter by Mr. Schrager which includes some charming stories about the founding of the festival as well as it's highlights and lowlights (including the sudden, unexpected rainstorm that ruined the 2006 Barbeque and Champange event known as the BubbleQ.)

* Short interviews with chefs and other luminaries such as Francis Ford Coppola, Rocco DiSpirito, Charlie Trotter and Alain Ducasse entitled "Grilled for One Minute" where they are asked questions such as "What do you eat or drink when no one is watching?"

All of this really gives the reader a feel for this "Summer Camp for Chefs". Then there are the recipes by famous television chefs such as Bobby Flay, Tyler Florence, Mario Batali, Guy Fieri, Cat Cora, Jamie Oliver, Martha Stewart, Ted Allen, Rachael Ray, Emeril LaGasse, Paula Dean, Masaharu Morimoto and more plus a host of equally talented restaurant chefs from across the nation.

The chapters mirror some of the events held at the festival itself:

* Chapter 1 Drinks
Since the first year of the festival wine has played an important part in the celebration, however cocktails are also a valued component. This chapter includes recipes for potent potables such as: Satsuma Margarita with Basil by Susan Spicer; Vermillion by Allen Katz; and Sandra Lee's Lemon-Cucumber Cocktail.

* Chapter 2 Starters and Small Plates
Most of the food offered at the various festival venues are served in small portions. This chapter features recipes for tapas, nibbles, hors d'oeuvres, first courses, starters, little bits, finger food... whatever you call them they are tasty little bites, including: Melon Salad with Lemon Grass Shrimp by Daniel Boulud; Wild Florida Shrimp Mojito by Allen Susser; and Chilled Scallop and Lychee Martini by Marc Ehler

* Chapter 3 Barbecue
The BubbleQ, a champagne and barbecue extravaganza, has become SoBe's signature event. Here you will find culinary creations including: Sambal Shrimp by Emeril LaGasse; Texas Hill Country Brisket by Elizabeth A. Karmel; and Swordfish-Bacon Kebabs with Cilantro Gremolata by Ming Tsai

* Chapter 4 Burgers
The Burger Bash, hosted each year by Rachael Ray, is the most popular event at the festival. Top Chefs participate with a zeal usually reserved for more prestigious fare, such as restaurant-style main courses. I have already made several of these recipes and they are outstanding. They include: Bobby Flay's Bobby Blue Burger Crunchified; Spike Mendelsohn's Colletti's Smokehouse Burger; and Michael Symon's Fat Doug Burger (Yummy!)

* Chapter 5 Comfort and Casual Food
Even professional chefs and the foodies that follow them will drop what they are doing for a well-prepared BLT, a great Grilled Cheese Sandwich or Mac 'n Chess done right. Here are some great, informal dishes, like: Shrimp and Grits by Howie Kleinberg; A Lobster Roll Sandwich by none other than Martha Stewart; and Cat Cora's Crab and Avocado Sandwiches with Mango Coulis.

* Chapter 6 Main Courses
This chapter includes dishes that you will find at some of the finest restaurants in the nation. Here is what's for dinner: Jean-Georges Vongerichten's Rack of Lamb with Green Chile, Mint, and Sweet Pea Puree (I made this and it was awesome!); Alan Ducasse's Foie Gras Tapioca Ravioli with Sunchoke Emulsion; and Chef Morimoto's Braised Black Cod

In addition to the candid photos there are plenty of studio quality photos of the featured dishes by New York photographer Quentin Bacon. Although the photographs are very professional I found Mr. Bacon's lighting and set design to be tedious. He used the "very-shallow depth-of-field technique" to such a degree that I often had to really search for the one small point that WAS in focus. Also, I felt that there was too much "white-on-white" compositions, such as the Cubano Burger on page 122 and the Braised Black Cod on page 200, to name but a few. By the time I reached the end of the book I felt that I should have worn sunglasses.

I have prepared close to a dozen of the recipes here and have not been disappointed at all. Since this is really a "Foodie's Cookbook" it might have limited appeal to those that are looking for quick and easy recipes. However, for those that love not only good meals but also the community of people that prepare them, this is indeed a wonderful celebration of the world of food.

If I was able to award half stars I would give this book 4 1/2 but since I can't I will round it up to five. The recipes are really great and I will keep it on the top shelf of my bookcase!

Momo
5.0 out of 5 stars If only I could cook...
Reviewed in the United States on 20 April 2012
Verified Purchase
So I bought the book and I have to say the recipes all looked mouth watering. I tried one and it was more involved then I usually attempt but it turned out quite nice. Now if only I could find someone to make all the other delicious sounding recipes for me! In the meantime - it is a nice coffee table book and I have had people pick it up and copy recipes from it so a worthwhile purchase.
Read more
One person found this helpful
Report abuse

CAS
5.0 out of 5 stars Great book which arrived in stellar condition
Reviewed in the United States on 26 November 2019
Verified Purchase
Gift for friend
Read more
Report abuse
See all reviews
Back to top
Get to Know Us
Make Money with Us
Let Us Help You
And don't forget:
© 1996-2021, Amazon.com, Inc. or its affiliates