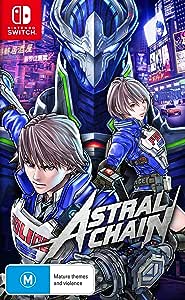 Humanity’s last chance against an interdimensional invasion is a special living weapon called the Legion. As a rookie officer in the elite police task force Neuron, you and your Legion will work together to solve cases and save humankind. The ASTRAL CHAIN game gives you full control over two characters at once for thrilling Synergetic Action, courtesy of PlatinumGames. Alternate between several Legion types and skills to save the world your way. ASTRAL CHAIN features character designs by the acclaimed manga artist Masakazu Katsura (ZETMAN, Video Girl Ai), and marks the directorial debut of PlatinumGames’ Takahisa Taura (designer of NieR:Automata). Hideki Kamiya, director of the Bayonetta game and writer/supervisor of the Bayonetta 2 game, provides supervision.

In the Ark, a multi-cultural city in the near future, disaster strikes when gates to another dimension suddenly appear! Dangerous creatures begin to emerge, attacking the people and polluting the land, and normal police forces are unable to compete with them. To stand up against these threats, a brand new, special police unit known as Neuron is formed. Choose between two playable characters – one male, one female – on your adventure. The character you don’t choose also appears as your younger twin, and a fellow member of Neuron. As part of a police special task force, it’s up to you to fight against mysterious, alien-like creatures who have invaded the world. In order to resist the creatures, humanity developed a special weapon: the Legion. The Legion acts as your partner, and helps with your investigations. However, it’s in battle where the Legion shows its real ability. Work together with the Legion and use all sorts of combat styles to fight your enemies. You could both attack the same enemy simultaneously, target different opponents, or send your Legion on the offensive while you support it with items. Use this synergetic action system to battle and explore together! Making his directorial debut and known for his work as the game designer on NieR:Automata, Takahisa Taura is responsible for the concept and planning of ASTRAL CHAIN. Hideki Kamiya, creator of the Bayonetta series, is in charge of supervision. The character design is by manga artist Masakazu Katsura, creator of ZETMAN and Video Girl Ai.

4.5 out of 5 stars
4.5 out of 5
50 global ratings
How are ratings calculated?
To calculate the overall star rating and percentage breakdown by star, we don’t use a simple average. Instead, our system considers things like how recent a review is and if the reviewer bought the item on Amazon. It also analyses reviews to verify trustworthiness.

Mik
1.0 out of 5 stars a joke
Reviewed in Australia on 22 February 2020
Verified Purchase
you don't get a new game. it's 2nd hand... last time I bought games on amazon.. also did not get an answer if I get compensation.. the only option is to send it back. feeling scammed
Read more
5 people found this helpful
Helpful
Comment Report abuse

Amazon Customer
5.0 out of 5 stars Pokemon+Bayoneta/DMC - Must have
Reviewed in Australia on 9 January 2020
Verified Purchase
I am currently 5 hours in (chapter 3 of the game) and I could be further but as any platinum game I went back to get a better score on my fighting style.
The world is interesting, I think the graphic style is superb, the controls are responsive and it's a game with more depth than you imagine and you can "Get good" and fully use the game elements.
For a beat'em up game, has a lot of exploration and side mission that you can do.
You also have skills trees to upgrade your Legion/Pokemon, you can select they skills & abilities to customize to your play style and even upgrade your weapons.

The game is everything that I was looking for and has surpass my expectations. For me is one of the must have switch games

Paul
5.0 out of 5 stars Great game
Reviewed in Australia on 8 September 2019
Verified Purchase
This is not a genre or theme/setting I'm usually into but I have thoroughly enjoyed this game. It has a nice blend of fighting, upgrading/customisation, storyline and detective work. The art style and music are perfect. There are enough side missions but not so many that it becomes overwhelming.

I'd give it a 4.5 if I could, it is not perfect, there are a few minor issues but otherwise I have no regrets spending 20 hours on this and look forward to spending another 10 or 20 to completing off the side stuff and things I missed.
Read more
Helpful
Comment Report abuse

Adrian
5.0 out of 5 stars Full of that Platinum goodness
Reviewed in Australia on 27 December 2019
Verified Purchase
Had it on the shelf for a couple of weeks and decided to try it last night.
From the get-go it feels so fast and fluid, starts off with an absolute banger of a mission and I was hooked straight away.

Zmeter
4.0 out of 5 stars Used copy alert
Reviewed in Australia on 17 October 2020
Verified Purchase
The Game is a great experience but I assume it was used as there was no plastic sleeve Case thing. Overall good game
Read more
Helpful
Comment Report abuse

Stacey
5.0 out of 5 stars Love it
Reviewed in Australia on 19 October 2019
Verified Purchase
I bought it for my son and I would need a translator and 15 pages to tell you what he thinks about it. Let's just say he loves it and is still trying to beat it!
Read more
Helpful
Comment Report abuse
See all reviews
Get FREE delivery with Amazon Prime
Prime members enjoy FREE Delivery and exclusive access to movies, TV shows, music, Kindle e-books, Twitch Prime, and more.
> Get Started
Back to top
Get to Know Us
Make Money with Us
Let Us Help You
And don't forget:
© 1996-2020, Amazon.com, Inc. or its affiliates