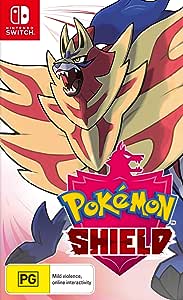 Rise to the challenge and join the hunt!
Explore lush ecosystems and battle fearsome monsters to become the ultimate hunter Shop now

The Pokemon Sword and Pokemon Shield games take place in the Galar region. Galar is an expansive region with diverse environments- an idyllic countryside, contemporary cities, thick forest, and craggy, snow-covered mountains. The people and the Pokemon who live there work together closely to develop the industries in the region. Fans will have the opportunity to visit various Gyms in the Galar region in their quest to become Champion. They will not be alone, since the newly discovered Pokemon they choose to be their first partner will be by their side. The adventure begins in Pokemon Sword and Pokemon Shield when players choose one of three new Pokemon-Grookey, Scorbunny, or Sobble. Grookey, a Grass-type Chimp Pokemon, is mischievous and full of boundless curiosity. Bursting with energy, Scorbunny, a Fire-type Rabbit Pokemon, is always running about. The stealthy Sobble, a Water-type Water Lizard Pokemon, shoots out attacks as it hides itself in water.

4.7 out of 5 stars
4.7 out of 5
192 global ratings
How are ratings calculated?
To calculate the overall star rating and percentage breakdown by star, we don’t use a simple average. Instead, our system considers things like how recent a review is and if the reviewer bought the item on Amazon. It also analyses reviews to verify trustworthiness.

Ysobel
2.0 out of 5 stars A fun Pokemon game, but it could be more. Wait for a price drop or enhanced version
Reviewed in Australia on 3 December 2019
Verified Purchase
Disclaimer: I want to state straight away that I was not planning on buying this game, however I won a giveaway and due to time of year (November) and shipping from anywhere outside of Australia that isn't Amazon US, orders tend to take over a month to get to Tasmania, so I was given the money to buy the prize.

Did I have fun though? Only when I got away from the Main Story, which is a terrible thing to say. I did enjoy it though - I cannot stress that despite how bad a game it is, I enjoyed it. I just did NOT enjoy the story at all, and when you take away doing the gyms, you're mostly left with the Wild Area, which is an unpolished, laggy mess, with little to do except catch Pokemon.

It's disgusting that this game is priced so much for how unpolished it is. Wait until is on sale because it is not worth $70. There is not enough content, the game treats you and your time poorly, and while if you're a Pokemon fan, you'll probably have a ton of fun with it, it just isn't worth it in it's current state. Also, if trends are anything to go by, they'll probably release an updated version in a year or two fixing a lot of the current problems, and despite how scummy that is (alongside dual releases of the same game in 2019), it's probably more likely the updated version when it comes out will be the better game.
Read more
10 people found this helpful
Helpful
Report abuse

widepeepoHappy
TOP 500 REVIEWER
5.0 out of 5 stars Tried and true
Reviewed in Australia on 29 November 2019
Verified Purchase
Should you buy this? If you like Pokémon, then yes. If you don’t like Pokémon, then no. If you’re interested in Pokémon, this would be a good entry point, as it’s very beginner friendly - most of the hard yakka will be done for you by the game.

I mean, it’s a Pokémon game. Overall the same formula, with changes here and there. Nothing mind blowing, but it is a Pokémon game. If you aren’t much of a Pokémon fan, then this isn’t going to inspire some radical change in opinion.
Read more
2 people found this helpful
Helpful
Report abuse

Chris Huston
5.0 out of 5 stars Pokemon Shield is the big screen Pocket Monster RPG experience
Reviewed in Australia on 10 September 2020
Verified Purchase
Pokemon Shield is the epic console RPG sequel we were all waiting for ever since rumours of Pokemon RPG on the big screen on n64 many years past. This time Victor/Gloria arrived in UK themed Galar region on a mission to build a pokemon team to take down Team Yell & 8 Gym leaders to challenge Leon for the Champion's Cup. Highlights this time are Team Yell's plots & scheming just like Team Rocket before them, diverse settings from the misty woods of Slumbering Weald, country side fields castle Hammerlock, tunnels of Galar Mine & high mountains of Chirchester, greatly expanded Wild Areas, Dynamaxing & Gigantamaxing pokemon towering above and type based training Gyms with new leaders Milo, Nessa, Bea & co, just like Brock & co before them.
Read more
One person found this helpful
Helpful
Report abuse

Jason Z
4.0 out of 5 stars Fair game for a Pokemon lover
Reviewed in Australia on 19 November 2019
Verified Purchase
Very fast delivery. I got this on the same release day! The game itself is quite controversial. Personally, the story is very simple and short. Fighting is not challenging even against Gym. Lots of classic Pokemons are removed as we all know. The graphic is not that bad though. Either way I still think it's worth buying as you wouldn't want to miss out the first OFFICIAL Pokemon on NS (Let's Go Pikachu is just an extension to Pokemon Go).
Read more
2 people found this helpful
Helpful
Report abuse

DeadlyLampshade
3.0 out of 5 stars One Step Forward, Two Steps Back
Reviewed in Australia on 13 January 2020
Verified Purchase
Some people will say this is a gift from the gods, others will say it was comparable to Satan giving you an upper-decker. I say it's none of these things. It offers some really great features, but takes away a lot of the cool features of the past. If you were a Pokemon fan and you think that Black & White was the best in the series, you probably aren't going to be impressed, come in with tempered expectations. Otherwise, it's not the worst game ever, its still fun.
Read more
One person found this helpful
Helpful
Report abuse

Namanjot Singh
5.0 out of 5 stars Bag
Reviewed in Australia on 15 November 2019
Verified Purchase
All good but I didn't receive the downloadable code for the golden bag
Read more
4 people found this helpful
Helpful
Report abuse

kim
1.0 out of 5 stars If you want to unfriend someone who is not pokemon fan, recommend this game
Reviewed in Australia on 28 January 2020
Verified Purchase
During the whole time of playing this game, I didn’t smile or laugh at all... no fun...
I am not a pokemon fan. I bought this because my friend has Sword and he wanted me to play Shield so we can exchange our pokemons.
But anyway this game is so boring...
It will make you to fall asleep really well if you play this game on your bed.
Read more
Helpful
Report abuse

Steven Zhou
4.0 out of 5 stars Good but should be better
Reviewed in Australia on 21 November 2019
Verified Purchase
Don’t care what other said, good Pokémon game because this is Pokémon.

But with this quality, should do better as other companies have lifted the game industry into higher level!
Read more
2 people found this helpful
Helpful
Report abuse
See all reviews
Back to top
Get to Know Us
Make Money with Us
Let Us Help You
And don't forget:
© 1996-2021, Amazon.com, Inc. or its affiliates