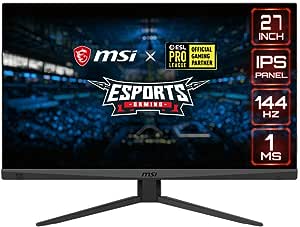 Visit the msi Store
4.7 out of 5 stars 16 ratings
Secure transaction
Returns Policy
Your transaction is secure
We work hard to protect your security and privacy. Our payment security system encrypts your information during transmission. We don’t share your credit card details with third-party sellers, and we don’t sell your information to others. Learn more
Currently unavailable.
We don't know when or if this item will be back in stock.

Visualize victory with the MSI Optix MAG274 flat eSports gaming monitor. The Optix MAG274 is built to give you a competitive edge with a 1920x1080, 144hz refresh rate, 1ms response time panel. Combined with FreeSync technology, the Optix MAG274 can match the display's refresh rate with the GPU for ultra-smooth gameplay. Reach the peak of immersion with the latest technologies featured in MSI gaming monitors. The Optix MAG274 is equipped with an IPS panel that eliminates image distortion and provides minimal color shifts when viewed from different angles. IPS panels also offer crystal clear imagery and instantly optimizes screen color and brightness to ensure the best viewing experience. The Optix MAG274 is equipped with a 144hz refresh rate and 1ms response time IPS panel which benefits the most in fast-paced game genres such as FPS, RTS, and MOBAs. These games require quick and precise movements, which an ultra-high refresh rate and fast response time monitor will put you ahead of your competition.

4.7 out of 5 stars
4.7 out of 5
16 global ratings
How are ratings calculated?
To calculate the overall star rating and percentage breakdown by star, we don’t use a simple average. Instead, our system considers things like how recent a review is and if the reviewer bought the item on Amazon. It also analyses reviews to verify trustworthiness.

Linh
5.0 out of 5 stars Love it
Reviewed in Canada on 17 November 2020
Verified Purchase
I bought it because I need 1080p 144Hz monitor which is compatible with my RTX 2060 laptop. It does not support via HDMI, so that I have to buy an extra DP cable. But it works. Much better than without Freesync.
The OSD app is good, I can control everything about the monitor, change modes quickly. The app is also very handy with many utilities.
The color is vivid, bright and clear. Much better than my old 1080p monitor.
I found ghosting/blurry somewhat but should be okay for cheap monitor.
The USB hub is also useful. I use it to connect my keyboard and mouse.
I love it! Piad for $270 before tax.

Nick
4.0 out of 5 stars So far so good. Buy it on sale though.
Reviewed in Canada on 7 January 2021
Verified Purchase
I got this display for around 258CAD before taxes. At this price? A freaking good deal. At the standard price-point of 400$+ though? Nope. First of all, HDR10 looks like total crap, on this display at least.

It looks washed-out, over-bright, it's just useless. At the price I paid, no big deal. And yes, if you want good HDR on a monitor, you'll have to pay over 600$ at the very least. Preferably even over 1000$ if you really care about good HDR.

With HDR OFF, FreeSync Premium ON, and all the other bells and whistles (although you can't use Anti-MotionBlur with FreeSync ON, so display is 4MS instead of 1MS in such case), that's where this display starts shining. Image quality is pretty neat. Colors could be a bit better though, but with some adjustments, and Nvidia Digital Vibrance, it looks great.

The mount could be better though. On this particular model, you can't adjust height or left-right angle. Only up and down angle. But again, at under 300$? Not a big deal.

And no dead pixels whatsoever for me so YAY! I guess I'm lucky. Not sure if some can appear later down the line? But usually, dead pixels show-up right out of the box.

FreeSync also works 100% with G-Sync with DisplayPort. Didn't try with HDMI, but I think it doesn't work. So make sure to grab a DisplayPort cable if you don't already have one.

USB cable included to adjust settings on the display through software is ridiculously short. Luckily, I have an USB Hub on my keyboard.
Read more
Report abuse

TJ
5.0 out of 5 stars Great value for money
Reviewed in Canada on 8 January 2021
Verified Purchase
Great value for money monitor if you can get it for around $250. Nice and bright, good contrast.
OSD software is great for changing monitor display settings without having to use the controls on the monitor itself (comes with usb cable to connect monitor to computer to use OSD software).
Has Freesync and is G-sync compatible which is a nice surprise (Nvidia Control panel popped up to setup G-sync when turning on Freesync Premium from the monitor settings).
Stand is very sturdy.
Bezels are really quite small and narrow. Overall a really nice screen and no compliants. A really nice upgrade from 60Hz gaming.
Read more
Report abuse

Yves
5.0 out of 5 stars Easy Setup
Reviewed in Canada on 14 January 2021
Verified Purchase
Was borrowing my brothers monitor and bought this for a good price on sale compared to other on the market at the moment. If I want to reach the better refresh rates I'll have to buy a separate cord since HDMI came with this one.
Read more
Report abuse

Not Returned
3.0 out of 5 stars One dead pixel :(
Reviewed in Canada on 31 December 2020
Verified Purchase
It's an excellent monitor nothing wrong with it, except the one dead pixel. If I fix it I will change my review.
Read more
Report abuse
See all reviews
Get FREE delivery with Amazon Prime
Prime members enjoy FREE Delivery and exclusive access to movies, TV shows, music, Kindle e-books, Twitch Prime, and more.
> Get Started
Back to top
Get to Know Us
Make Money with Us
Let Us Help You
And don't forget:
© 1996-2020, Amazon.com, Inc. or its affiliates