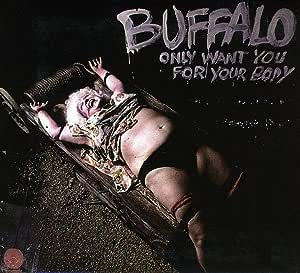 Secure transaction
Your transaction is secure
We work hard to protect your security and privacy. Our payment security system encrypts your information during transmission. We don’t share your credit card details with third-party sellers, and we don’t sell your information to others. Learn more
Details
Ships from
Amazon AU
Sold by
Amazon AU
New (5) from
$26.19 & FREE Delivery

Only Want You For Your Body

Buffalo's third album "Only Want You for Your Body", the last with the classic line-up of Dave Tice (Count Bishops), John Baxter, Pete Wells (Rose Tattoo) and Jimmy Economou, was released in 1974. With six further Tice/Baxter classics, including "I'm a Skirt Lifter, Not a Shirt Raiser" and "Kings Cross Ladies", the album cemented Buffalo's reputation as Australia's premier hard rock band. The wildly tasteless cover design featured an obese, screaming, semi-naked woman shackled to a torture rack. On the back cover, the band reveled in their role as leering, lascivious Aussie yob rockers, with Tice wearing a devilish grin while clad in his black leather strides 'n' braces and brandishing a bullwhip. It was just a bit of harmless fun, yet outraged record store managers across the land refused to stock the record, some eventually placing it in a brown paper bag to hide the offending images. Aztec. 2005.

4.6 out of 5 stars
4.6 out of 5
14 global ratings
How are ratings calculated?
To calculate the overall star rating and percentage breakdown by star, we don’t use a simple average. Instead, our system considers things like how recent a review is and if the reviewer bought the item on Amazon. It also analyses reviews to verify trustworthiness.

mr a r mathieson
5.0 out of 5 stars Five Stars
Reviewed in the United Kingdom on 12 February 2016
Verified Purchase
This is an excellent cd.
Read more
Report abuse

kufner herbert
5.0 out of 5 stars Top
Reviewed in Germany on 29 September 2020
Verified Purchase
Okay
Read more
Report abuse
See all reviews
Back to top
Get to Know Us
Make Money with Us
Let Us Help You
And don't forget:
© 1996-2021, Amazon.com, Inc. or its affiliates