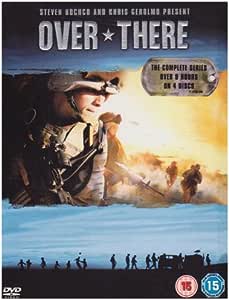 All 13 episodes from the groundbreaking series from Steven Bochco. The series takes you to the front lines of battle and explores the effects of war on a U.S. Army unit sent to Iraq on their first tour of duty, as well as the equally powerful effects felt at home by their families and loved ones. Episodes comprise: 'Pilot', 'Roadblock Duty', 'The Prisoner', 'I Want my Toilets', 'Embedded', 'It's Alright Ma, I'm Only Bleeding', 'Mission Accomplished', 'Situation Normal', 'Spoils of War', 'Suicide Rain', 'Orphans', 'Weapons of Mass Destruction' and 'Follow the Money'.

4.5 out of 5 stars
4.5 out of 5
77 global ratings
How are ratings calculated?
To calculate the overall star rating and percentage breakdown by star, we don’t use a simple average. Instead, our system considers things like how recent a review is and if the reviewer bought the item on Amazon. It also analyses reviews to verify trustworthiness.

rob stirling
5.0 out of 5 stars Top class entertainment.
Reviewed in the United Kingdom on 27 July 2017
Verified Purchase
A remarkable series that provides much entertainment for both enthusiasts of the war genre and viewers who like a 'soap' element consisting of civilian life back home, which my wife enjoys--- the balance is deep rooted in 'Over There' and I can recommend this to all members of the family.
But it's not for the squeamish as there are some scenes of war deaths from gun and explosion that are graphic which gives the episodes realism.

The realism continues with the story lines of the wives, husbands, mothers and fathers of the combatants adjusting to the loneliness of life without them--- unfaithfulness, temptations, alcoholism and being over-burdened with coping with the children left behind to name just a few problems experienced by many in every war for centuries.

The acting is solid as you would expect from these performers. No star names but many have left their mark in the many tv series that they have worked in over the years.
Rami Malek was outstanding in 'The Pacific' as 'Snafu' as well as having an unforgettable but brief role in '24'. And currently he is the star of the series 'Mr Robot'. Lets not forget the Oscar for 'Bohemian Rhapsody'.
Omid Abtahi also had a brief role in '24'.
Sprague Grayden played a Presidents daughter in '24' for several episodes.
Perhaps the most outstanding character in the series is Sergeant 'Scream' played by Erik Palladino, a veteran of many outstanding tv series and films.

I found the single series outstanding and am wondering whether to buy 'Generation Kill' as a follow up watch.

Amazon Customer
3.0 out of 5 stars Cliched and showing its age
Reviewed in the United Kingdom on 23 March 2016
Verified Purchase
NO SPOILERS. I really wanted to like this. But its a little disappointing. I'm half way through watching in 2016 and its a bit of a struggle. I think this series is showing its age because how much TV dramas have continued to improve since the time that this series was produced. "Over There" is a bit cliched in places...for example. soldier goes off to war....loved one at home finds it hard (ok thats reasonable but she finds it hard in a very cliched way)..... One long running story line you can tell how its going to go before its even happened. The fighting scenes are poor, not in the league of A Band of Brothers, often most of the squad are in the same shot as they attack instead of being spread out (one machine gun attack and they'd all be dead). There is no feeling of cameraderie and special bond that develops between the soldiers, they often bicker with each other, not so much feeling of them being a team greater than the sum of their parts. The acting is ok, but the dialogue is not particularly rich, or nuanced or demanding of the viewer. There is no overall feeling of what the aim of their time in Irag is for (Ok, perhaps this mirrors the real world a bit more here).

Lastly the camera shakes and is quick to move on, so this makes it physically wearing on the eye to actually watch...I have to watch it from a long distance away (the other end of my living room) and sometimes put my hand in front of my eyes till this sort of camerawork has finished.

Eric Palladino is the standout character for me so if you like him, its worth getting for that reason. I imagine if you have watched Generation Kill and A Band of Brothers, then this wont ever make it onto your radar and that would be about right
Read more
4 people found this helpful
Report abuse

AOR_Jim
4.0 out of 5 stars Good series, ok extras, worth a watch.
Reviewed in the United Kingdom on 17 May 2018
Verified Purchase
Short single season series showing the lives of US soldiers in Iraq and the impact of their families. Generally well made, with a little bit of depth to the main characters which grows over the short 13 episodes. Each episode covers a different aspect of the war - some more interesting with moral dimensions than others. The sections devoted to the families back in the US, were ok but probably not necessary for a single season show (no doubt if it had been renewed this wold given more opportunities for ongoing story lines).

Includes an ok extra about the making of the last episode.

Clipper 314
5.0 out of 5 stars actually very good !
Reviewed in the United Kingdom on 21 April 2011
Verified Purchase
surprisingly good given that it supposedly 'failed' to get a 2nd season... fact is (from my perspective), it didn't need one as everything had been set for your own imagination, ideas and moralities to kick in and fill in all of the blanks that were set up for you in the series...Admittedly I was a little sceptical at all the shooting in the pilot episode, but it quickly settled down to give an in depth view of the soldiers at war and the issues for the ones at home. I warmed to all the characters and was keen to see where the plots went next. Well acted, scripted and thought through.. and very touching. I'm quite happy to give artistic licence for the messages to get across, and this does just that. Very good, thought provoking viewing
Read more
Report abuse
See all reviews
Get FREE delivery with Amazon Prime
Prime members enjoy FREE Delivery and exclusive access to movies, TV shows, music, Kindle e-books, Twitch Prime, and more.
> Get Started
Back to top
Get to Know Us
Make Money with Us
Let Us Help You
And don't forget:
© 1996-2020, Amazon.com, Inc. or its affiliates