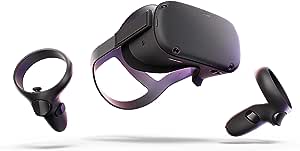 Brand: Oculus
4.7 out of 5 stars 293 ratings
Available from these sellers.

There is a newer version of this item:

Oculus Quest is an all-in-one gaming system for virtual reality. No wires. No PC. Just set up with the Oculus mobile app, and you're free to explore VR from almost anywhere. Sensors inside the headset precisely track your movements and instantly translate them into VR, while helping you steer clear of nearby objects. And with Oculus Touch controllers, your hands are in the game, so you can see your every gesture and feel the power of every impact. Take VR gaming to the next level. And everywhere else. Setup requires an iPhone(iOS 10 or higher) or Android(6.0 Marshmallow or higher) smartphone, the Oculus App (free download), 802.11 b/g/n wireless Internet access, and an Oculus account.

4.7 out of 5 stars
4.7 out of 5
293 global ratings
How are ratings calculated?
To calculate the overall star rating and percentage breakdown by star, we don’t use a simple average. Instead, our system considers things like how recent a review is and if the reviewer bought the item on Amazon. It also analyses reviews to verify trustworthiness.

Joseph Tan
5.0 out of 5 stars Easiest and the most immersive VR system yet
Reviewed in Australia on 28 May 2019
Verified Purchase
As an owner of the Oculus Rift DK1, DK2 and CV1, the Quest is a very significant milestone in the development of VR because it is the first commercial 6 degree-of-freedom (including hand controllers) system. It is simply amazing what the engineers have managed to pull off here.

Compared to the CV1, the major improvements are:

The build quality is excellent, we're talking Apple-quality fit and finish here. Longevity looks decent, but with VR moving at such a rapid place I think the hardware probably will easily last 3-4 years (until the next Quest comes along).

What makes the magic happen is the software, at the present time (May 2019) the Oculus home screen has a clean design. I'm glad that Oculus did not implement the Oculus Home environment in their tethered VR system (I think it is simply useless and unnecessary).

At release time, there is a good selection of titles and will surely be much better in the following years,

mchonan1996
5.0 out of 5 stars Amazing
Reviewed in Australia on 21 May 2019
Verified Purchase
I bought the original Oculus Rift and this is just mind blowing. No cords, no PC needed. It's a fantastic experience and the system works great.

Online shopper 7369032545028383405218219345
5.0 out of 5 stars Very impressive compared to other headsets.
Reviewed in Australia on 13 December 2019
Verified Purchase
$850AU is a solid amount to pay especially the $150AU for an additional 64GB.
I don’t regret this purchase though, here’s why.
Mark Zuckerberg , the founder of oculus and his team have Been working very hard on the software for this headset and getting games to the system and it’s paying off.

Oculus link is out (they’re working on a guaranteed 5m cable).

Hand tracking is out, a bit buggy but will get there (it’s in it’s experimental phase)

The guardian is fantastic, basically an invisible wall you customise so you don’t hit any walls or furniture.

The tracking of the controllers is 98% only had an issue here and there whilst playing beatsaber when your controller moves outside the scope of the cameras on the headset, which is rare as they are a wide angle.

The amount of games over the last month that this snapdragon processor can handle is crazy (Samsung galaxy s8 processor)
Since it is a phone processor... they do compensate some games graphically e.g textures are smoothed on some games. But it makes up for it in gameplay.
There are a few free games to get you started after the hefty price (the price here is actually pretty good, you can get a better price around Boxing Day or Black Friday due to the nature of these events).

The main negative I have is that it is front heavy, I bought a silicone face cover for it, rechargeable batteries for the controllers and a cover for the lenses while not in use (the sun can damage the oled display)

Mr Olds
5.0 out of 5 stars Whats not to love?
Reviewed in Australia on 6 September 2019
Verified Purchase
A little about me so you understand my opinion, Im 50 odd in years, this is my first experience with modern VR and from the first demo i played on a friends quest i was hooked.
I without having any know;edge of what else was out there decided to also buy the quest over the rift only because it was wireless, If you buy the quest you have to buy the add on battery for it, games like dead and buried 2 will consume the short battery life on it, With a cord attached its a poor mans rift while playing.
Playing games that require you to move a lot take your focus from the need to stay in a confined area and destruction of a cord is assured, Less than 2 hours playing dead and buried 2 i head butted the wall twice, Went to lean on objects that where a figment of the virtual world causing me to fall on walls and tables, yeah i know funny as hell as long as noone sees yo do it right?
Both times i though for sure i would have damaged the oculus but fortune in my favor it held up to it, I had a sore nose for 3 days so it was no bump,still a little sore ATM.
Anyway, You don`t have to buy head phones,Mic is built in but its pretty crappy. Extra battery a must have.
The guardian works awesomely but again in a confined room you will forget it as you become more emersed in the game your playing , So do yourself a favor and keep checking where your at inside the guardian often,your going to get hurt unless all the games you play are stationary, Even then you bound to lean on something thats not there.
These are the pit falls.
Enough of my ramblings, Short story short, Stay wireless, while playing motion games, More power for the short battery life on the oculus and enjoy the hell out of it.
Read more
6 people found this helpful
Helpful
Comment Report abuse

Amazon Customer
5.0 out of 5 stars Fantastic. Easy VR is finally here...
Reviewed in Australia on 26 June 2019
Verified Purchase
LOVE not having to be tethered to a PC. So easy to just pick up and play. Good range of games available. Also great for watching movies through free Skybox app, as well as YT and Netflix. Image quality is very good, screen door effect has been minimised. On board audio is just ok...you will really want to plug in your own buds / cans for best audio experience. Other than that...just top stuff.
Read more
7 people found this helpful
Helpful
Comment Report abuse

max ashton
5.0 out of 5 stars Immserive and fun
Reviewed in Australia on 8 June 2019
Verified Purchase
Great headset and the freedom and safety off the device is excellent, use your own headphones if you want to on either side off the headset, the straps could easily fit on any head and fits really well, the only thing I have to say thats bad about it is that it's tiny bit heavy so if you have neck problems like some off my friends i don't recommend it but aside from that slight weight it is a superb headset...
Read more
4 people found this helpful
Helpful
Comment Report abuse
See all reviews
Get FREE delivery with Amazon Prime
Prime members enjoy FREE Delivery and exclusive access to movies, TV shows, music, Kindle e-books, Twitch Prime, and more.
> Get Started
Back to top
Get to Know Us
Make Money with Us
Let Us Help You
And don't forget:
© 1996-2020, Amazon.com, Inc. or its affiliates