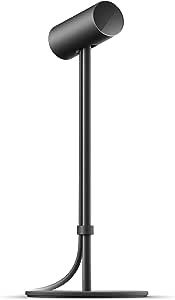 Brand: Oculus
Platform : Windows, Oculus
4.7 out of 5 stars 1,400 ratings
Available from these sellers.

With a clear line of sight, Oculus Sensor tracks constellations of IR LEDs to translate your movements in VR. Its stand is ideal for most setups and its standard 1/4 20 mount works with most tripods. Requires Rift, sold separately. When used as a third sensor, requires an additional USB 2.0 or higher port. Please note: 360 degree and Room Scale tracking are only supported for 3 sensor configurations. Experiences may not work as expected with experimental 2 sensor setups.

With a clear line of sight, Oculus Sensor tracks constellations of IR LEDs to translate your movements in VR. Its stand is ideal for most setups and its standard 1/4 20 mount works with most tripods. Requires Rift, sold separately. When used as a third sensor, requires an additional USB 2.0 or higher port.

Note: Two-sensor 360° tracking is an experimental feature—not all experiences may work as expected. Three-sensor 360° is fully supported.

4.7 out of 5 stars
4.7 out of 5
1,400 global ratings
How are ratings calculated?
To calculate the overall star rating and percentage breakdown by star, we don’t use a simple average. Instead, our system considers things like how recent a review is and if the reviewer bought the item on Amazon. It also analyses reviews to verify trustworthiness.

James
5.0 out of 5 stars Good but not necessary for room scale
Reviewed in Australia on 5 March 2019
Verified Purchase
I purchased this to have a third sensor for roomscale tracking, as recommended by Oculus.

To be honest, I was achieving pretty good room scale with just 2 in opposite corners. There was no noticeable improvement with 3 besides eliminating a small blind spot in one corner. Would not say it was necessary.
Read more
Helpful
Report abuse

Philip Greig
4.0 out of 5 stars great OEM quality
Reviewed in Australia on 9 September 2019
Verified Purchase
using these on a second PC so I can move my HDM to different computers quickly - work perfectly. The included active USB extension is only a usb 2.0 cable so not usable for primary sensor use, only for a 3rd
Read more
Helpful
Report abuse

Lou Tennant
5.0 out of 5 stars Oculus Rift 3rd Sensor
Reviewed in Australia on 20 November 2018
Verified Purchase
Just bought a 3rd sensor for Room Scale Rifting. Very happy with the result.
The 3rd sensor allowed me to position the original 2 in the corners of the room just below ceiling height and the 3rd at about shoulder height behind me in left corner.
It all works great, no tracking faults.
Read more
Helpful
Report abuse

Alison
4.0 out of 5 stars Came with USB 2 cable
Reviewed in Australia on 6 April 2019
Verified Purchase
The sensor is perfect and looking forward to setting it up. Only negative is the repeater cable is only a USB 2 which won’t work as well as the sensors come with USB 3 so it will seriously hurt the performance.
Read more
Helpful
Report abuse

scott cotton
5.0 out of 5 stars Super Happy
Reviewed in Australia on 4 October 2019
Verified Purchase
I was super happy the sensor came two days early and the repeater Cable was better then i hopped for
Read more

Keanu Wong
5.0 out of 5 stars Is what it is
Reviewed in Australia on 5 December 2018
Verified Purchase
This is exactly what it should be which is great. The Repeater cable is a nice addition too.
Read more
Helpful
Report abuse

Setting up the sensor wasn't just plug and play you will need to run complete sensor setup and use the 16 foot 2.0 extension cable that comes free with this sensor!!
I thought it would work better if I used all 3.0 cables but I kept getting a warning sign and an error message that says bad tracking fatal error and it will not allow you to finish the 360 setup, I tried many different USB 3.0 ports all came up with the same error even after a system reboot and driver updates, after few web searchs
I found that 3rd sensor has to use a 2.0 connection, I quess that's why they provide you with a free 2.0 cable lol :-)...
Read more
12 people found this helpful
Report abuse

Mr. James D. Westoby
4.0 out of 5 stars Shocked if it didn't work - and it is fine.
Reviewed in the United Kingdom on 29 May 2018
Verified Purchase
What's nit to like? Well, adding another sensor made my PC complain (so had to plug it in elsewhere) and it is more cables for a slightly better coverage. But really my complaint is more VR general (not even Oculus specific) more string around the place and that makes it harder to justify and use of course - shame.

Came with an active USB cable (but I used my own UGreen one).

But it works perfectly and is nicely designed so I can't be too hard, put another half star on there for me would you...!
Read more
2 people found this helpful
Report abuse

Danny Mason
5.0 out of 5 stars Yup, it's a sensor!
Reviewed in the United Kingdom on 18 October 2019
Verified Purchase
Picked up a third sensor to give my Oculus Rift 360 room tracking.

Came well packaged and a 5m extension cable was provides, I purchased this as a Warehouse deal, product was brand new and still sealed, the box had a small hole on it which is the only issue I saw.

Once all the plastic was peeled off the sensor, the set up was smooth and was no different to setting up the Rift with two sensors.

What can I say? This is a sensor and does it's just! If you want full room tracking then buy it while you can as Oculus are phasing out the original Rift products.
Read more
One person found this helpful
Report abuse

Ben
5.0 out of 5 stars Great add-on to get 360 tracking
Reviewed in the United Kingdom on 13 February 2020
Verified Purchase
Using this with my Oculus Rift Touch, it came with 2 tracking sensors, but I found that to get perfect 360-degree racking, a third sensor places behind me allowed for much better tracking. When setting up 3 sensors it can take a little bit of time to get it all set up in such a way that the Oculus software is happy with it. You also have to be careful what type of USB extension you are using and the ports you are plugging into, but once it is all set up it provides a great VR experience.
Read more
Report abuse
See all reviews
Get FREE delivery with Amazon Prime
Prime members enjoy FREE Delivery and exclusive access to movies, TV shows, music, Kindle e-books, Twitch Prime, and more.
> Get Started
Back to top
Get to Know Us
Make Money with Us
Let Us Help You
And don't forget:
© 1996-2021, Amazon.com, Inc. or its affiliates