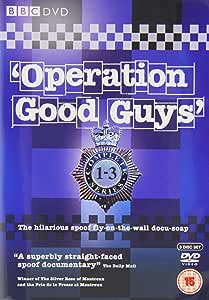 Series 1: A fly-on-the-wall documentary series about an elite police unit's bid to snare one of Britain's most powerful crime lords. But things are not quite what they seem... Operation Good Guys is in fact an innovative and irreverent comedy. Blurring the line between fact and fiction, it witnesses, on camera, the total breakdown, professionally and personally, of the Operation Good Guys team. Throughout the operation, The 'Good Guys' have an unfortunate habit of embroiling into their calamitous world some of the country's best-known celebrities, from actors and footballers, to TV presenters and even the odd ex-convict. Series 2: The first series won the Silver Rose for Best Sitcom and the Prix de la presse at Montreux 1998. Now DI Beach and the team are docu-soap stars, the police have no choice but to reunite them. Barry Couch, the constabulary's newly appointed razor-sharp PR consultant, organises a number of "controlled" showcase operations, from traffic calming in Camberwell to perfume scams on the Costa Del Sol, to prove the previous operation as a one-off failure. But with BBC producer Clive Tollack looking to manipulate every situation for television effect and Barry Couch trying to stop him, and with the Good Guys only beginning to come to terms with the pressures of their newfound celebrity, one thing is for sure - nothing will go to plan. Series 3: The hilarious spoof-docu-soap - set in a disaster-prone police station - returns. As the BBC commissions ever-more unrealistic scenarios, DI Beach and his colleagues find themselves dressed as women; giving road-safety classes to schoolchildren; investigating corruption in boxing; and generally misunderstanding the brief.

4.7 out of 5 stars
4.7 out of 5
171 global ratings
How are ratings calculated?
To calculate the overall star rating and percentage breakdown by star, we don’t use a simple average. Instead, our system considers things like how recent a review is and if the reviewer bought the item on Amazon. It also analyses reviews to verify trustworthiness.

Lee K. Freeman
5.0 out of 5 stars Fabulous & you really will lol
Reviewed in the United Kingdom on 12 August 2017
Verified Purchase
I was desperate to watch this again so bought it as a treat for myself to watch whilst recovering from a medical procedure. It's so daft that it's excellent. The improvised comedy comes up trumps with Beech, Bones et all complimenting each other well in performance. Love the contrast of characters; De Sade - Beech, Bones - Bill Zeebub. I'm not surprised it won awards, yet it remains as a less remembered BBC comedy series, which demands a greater appreciation. It's so excellently executed and really makes you 'Lol'. It is a fond favourite of mine and I can watch it over and over again. These inept police officers have a place in my mind, memory and heart. It really does deserve a more prominent place in comedy history.
Read more
10 people found this helpful
Report abuse

Moon the Loon
5.0 out of 5 stars Brilliant 90s Mockumentary series.
Reviewed in the United Kingdom on 11 October 2020
Verified Purchase
Written in the days before the thought police decided their sense of humour is the ONLY sense of humour permissable.

Operation Good Guys doesn't try to make you think in a certain way. It doesn't politicise anything. Best of all large chunks of it are improvised on the spot.

Which pretty much means it will never be broadcast in unedited form on UK TV ever again.

Spookylabrador
5.0 out of 5 stars Funny
Reviewed in the United Kingdom on 15 June 2017
Verified Purchase
This is hilarious, very un p.c which is why I like it. Some recognised faces amongst the cast and guest appearances in evry episode by other celeb types. Think of it as a 'The Office' type of docu but set in a Police setting. These chaps perfectly reflect todays police force, er I mean service, it's not a force anymore.
Read more
5 people found this helpful
Report abuse

Mr T M Casey
5.0 out of 5 stars Brilliant british comedy!
Reviewed in the United Kingdom on 23 March 2016
Verified Purchase
Little known police 'mockumentary' series. Brilliant and very funny series which is very good from the start and gets better as the episodes progress. The characters are all well written, funny and stupid. Great cameo performances from well known faces. A dvd you can watch and rewatch often in the way 'Only fools...' is enjoyed. It is one series. It is good british, tongue in cheek comedy knocking the pompous types who are in positions of authority. I think it is not too far from the truth!
Read more
3 people found this helpful
Report abuse

M. Joyce
5.0 out of 5 stars A cult in waiting
Reviewed in the United Kingdom on 2 December 2010
Verified Purchase
It beats me how this has never become a cult classic; it is clear from other Amazon reviews that I am not alone in my affection and admiration for the programme. It has often been described as a precursor of "The Office," but while they are both "fly-on-the-wall" documentaries, the latter is much more low-key in its approach and is nowhere near as surreal. "The Office" is undoubtedly a TV classic, but trust me, this will have you weeping with laughter. Incredibly, the dialogue has been largely improvised by the very talented cast. It is a real ensemble performance, but one must single out for special commendation David Gillespie's Jim Beach, a comic creation to rank alongside Captain Mainwearing and Basil Fawlty. It would be equally remiss not to pay tribute to John (Strings) Beckett's songs and the many guest stars (and BBC executives!) who pop up from time to time. The "extras" are very funny. Indeed, my only complaint concerns the laughter track which has been added to Series 2; it really does not work and is absolutely unnecessary.
Read more
6 people found this helpful
Report abuse
See all reviews
Get FREE delivery with Amazon Prime
Prime members enjoy FREE Delivery and exclusive access to movies, TV shows, music, Kindle e-books, Twitch Prime, and more.
> Get Started
Back to top
Get to Know Us
Make Money with Us
Let Us Help You
And don't forget:
© 1996-2020, Amazon.com, Inc. or its affiliates