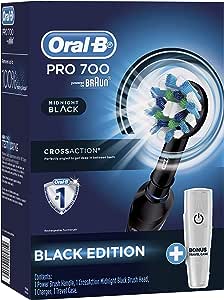 There was a problem adding this item to Cart. Please try again later.
We do not have any recommendations at this time
Continue shopping

Discover the Oral-B PRO 700 rechargeable electric toothbrush to brush like your dentist recommends with a professional 2-minute timer. It's clinically proven to remove 100% more plaque. Cleaner teeth and healthier gums. Experience Oral-B PRO 700 from the No.1 brand recommended by dentists worldwide. vs. a regular manual toothbrush.

4.7 out of 5 stars
4.7 out of 5
184 global ratings
How are ratings calculated?
To calculate the overall star rating and percentage breakdown by star, we don’t use a simple average. Instead, our system considers things like how recent a review is and if the reviewer bought the item on Amazon. It also analyses reviews to verify trustworthiness.

MikeC
TOP 500 REVIEWER
5.0 out of 5 stars Best thing I've Bought In Ages
Reviewed in Australia on 20 September 2018
Verified Purchase
I bought this a few weeks ago and it's just brilliant. I note some others have mentioned the noise but I haven't noticed any excessive noise. My teeth are cleaner and my mouth fresher than I think I ever managed with a manual toothbrush. I'm definitely converted to the Oral-B PRO 700 Rechargeable Electric Toothbrush – Powered by Braun.

Kat G
5.0 out of 5 stars Great toothbrush at a very reasonable price.
Reviewed in Australia on 24 December 2019
Verified Purchase
My old Oral B died after probably close to 20 years, so I knew I would get one similar. But I was pleasantly surprised by the low price for this one, so I did wonder if it would be ok.
Well, it is. It does the job perfectly. The timer every 30 seconds is encouraging me to clean my teeth more thoroughly, which is a good sign.
I used to suffer from bleeding gums a lot if I brush too much, but that hasn’t happened with this one at all.
Very happy and would definitely buy again.
Read more
2 people found this helpful
Helpful
Comment Report abuse

Shaun
2.0 out of 5 stars Pressure features is a gimmick
Reviewed in Australia on 4 October 2019
Verified Purchase
Specifically bought the 700 because it was the cheapest model with the pressure sensor addition - however it is useless for this function. The amount of pressure needed to trigger the 'change in noise' is excessive and unrepresentative of lower levels of pressure that can still cause enamel erosion. Furthermore the 'change in noise' that occurs seems more like the nose a motor makes under stress (as it would if oscilations were restricted from pressure) rather than a pre-set cut off for dangerous brushing pressure. Would recommend a cheaper mode.
Read more
3 people found this helpful
Helpful
Comment Report abuse

jirskyr
4.0 out of 5 stars Pretty good!
Reviewed in Australia on 18 July 2019
Verified Purchase
Wife and I moved on from manual toothbrushes. This product is reasonably cheap and I didn't need/want 400 different settings on the more expensive ones. Much much better than a manual brush.

It's a bit noisy of course, so you can't brush your teeth whilst listening to anything at normal volume.

But it does a good job, charge lasts about a week of brushing (I tend to brush longer) and it's easy enough not to press too hard.
Read more
One person found this helpful
Helpful
Comment Report abuse

Alek
5.0 out of 5 stars Worth the $$$
Reviewed in Australia on 11 July 2020
Verified Purchase
I had the cheaper oral B model and had issues so I paid a little extra for this model and found it was chalk and cheese. The quality and performance of this model is excellent the price represents value for money. I would recommend you purchase extra heads as there was only one supplied. There are other sellers who provide bulk units at food price but do shop around as sometimes you can get multiple w head packs cheaper then 5 head packs .

This oral b unit has solid construction and the brush motor is strong and cleans well. Battery lasts an extended period between charging

You will not be disappointed ted.
Read more
One person found this helpful
Helpful
Comment Report abuse

Dean
5.0 out of 5 stars Good buy
Reviewed in Australia on 22 November 2020
Verified Purchase
I didn't want to buy a high-end electric toothbrush, especially when features like Bluetooth ... not sure about you, but I want to brush and get out of there, not fool around. I like that it doesn't light up when you press "too hard", what's too hard for you might be comfortable, so it leaves you alone, except it has that reminder that has been two minutes, as if you wouldn't notice you've been brushing your teeth for 20 minutes, it's a silly feature, but I don't hold it against this product because it's in the older ones, too. The light is simple. It goes out on the charger when full, and flashes while charging. It's a good idea, so I hear, to keep your toothbrush off the charger before it needs it. It's a sturdy thing, so it could last years if you don't leave it on the charger, but that's a personal choice. It comes with one brush, which is okay, they're not cheap, though you wouldn't expect anything less. It's powerful enough, I felt the older version was too weak and took too long to get the same amount of work done. So yeah, if you're not looking for anything too fancy, and you want it to have a relatively chic look, this is it.
Read more
Helpful
Comment Report abuse

Ben
5.0 out of 5 stars It's great, but almost works too well.
Reviewed in Australia on 20 March 2020
Verified Purchase
This thing is POWERFUL. I recommend getting the softest brush head replacement pack, as the standard bristles feel more like belt-sanding your teeth. That said, man, it works. It just works TOO well. Use very light pressure, and you'll get an amazing clean.
Read more
One person found this helpful
Helpful
Comment Report abuse
See all reviews
Pages with related products. See and discover other items: Best Rated in Rotating Power Toothbrushes
Get FREE delivery with Amazon Prime
Prime members enjoy FREE Delivery and exclusive access to movies, TV shows, music, Kindle e-books, Twitch Prime, and more.
> Get Started
Back to top
Get to Know Us
Make Money with Us
Let Us Help You
And don't forget:
© 1996-2020, Amazon.com, Inc. or its affiliates