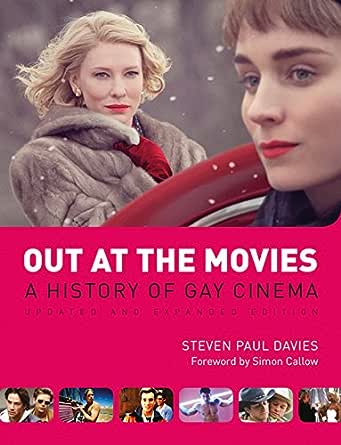 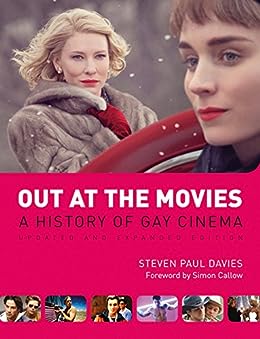 Out at the Movies: A History of Lesbian, Gay, Bisexual, Transexual and Queer Cinema Second edition, Kindle Edition

Steven Paul Davies is the author of A-Z of Cult Films and Filmmakers,Alex Cox: Film Anarchist, Get Carter and Beyond: The Cinema of Mike Hodges, andThe Prisoner Handbook, and the coauthor of Brat Pack Confidential.
--This text refers to an alternate kindle_edition edition.

"A thoughtful and well-presented overview of the subject with insightful perspectives on the complex role and social, political, and artistic impact of gay cinema within modern culture."" Library Journal""

"A detailed decade-by-decade look at the movies, actors and directors who defined each period, with plenty of gems for your 'to watch' list." "Gay Times"" --This text refers to an alternate kindle_edition edition.

4.2 out of 5 stars
4.2 out of 5
13 global ratings
How are ratings calculated?
To calculate the overall star rating and percentage breakdown by star, we don’t use a simple average. Instead, our system considers things like how recent a review is and if the reviewer bought the item on Amazon. It also analyses reviews to verify trustworthiness.

Susan Rose
2.0 out of 5 stars Neither one thing or the other
Reviewed in the United Kingdom on 3 March 2017
Verified Purchase
I have two big problems with this book it feels too personal to be an objective concise summary of hollywood queer movies but it feels not personal enough for me to really get a sense of the writer's tastes. I feel like this would have worked better as either a series of personal essays from the author as a critic or a more comprehensive but less analytical history of queer cinema. The Book we are left with doesn't really go into any of the movies enough for me to really get my teeth into the analysis but it doesn't really cover enough movies for it to be comprehensive either.

It's also not so much a look at lgbt cinema (mostly gay and a bit less lesbian) for example it calls Boys don't cry a lesbian movie which it isn't its a movie about a trans man. (In an older book I would have let this go but I read the 2016 edition where Carol is added, if the editors can add a new film they can certainly fix an error that misgenders a trans character in a supposedly inclusive lgbt friendly book).
Read more
3 people found this helpful
Report abuse

However I would not give this book a full mark for 2 reasons:
First of all it pays too much attention to the Oscars, which in my view is a very overrated award not to mention highly flawed. You only have to look at some of the dubious choices picked by the academy as `best picture' in the last 5 or 10 years to see that. Secondly the authors take a rather dim view of light hearted gay comedies and also of films with a happy ending. This is slightly odd as the book spends a good deal of its earlier chapters rightly complaining about the fact that films from the pre 1960s era always portrayed gay characters as victims, with the gay character almost always dying at the end. Then in later chapters the guide keeps referring to films with a happy ending as predictable.

As someone who loves a happy, upbeat and optimistic end to a story I found myself disagreeing with many of the authors views.

Gay cinema has come a long way in the last 30 years and all genres of films should be celebrated rather than derided.
Read more
3 people found this helpful
Report abuse

Douglas Machado
4.0 out of 5 stars Must read
Reviewed in the United Kingdom on 4 November 2012
Verified Purchase
It's an important view over the movies we see. A must read book indeed. And actually open our eyes for several things in Hollywood and world wime movies.
Read more
Report abuse

Isaac
4.0 out of 5 stars I was disappointed, however
Reviewed in the United States on 11 August 2017
Verified Purchase
A very detailed and inclusive book on queer cinema. There were a lot of films mentioned that I was surprised made the cut, since I was expecting them to latch mainly onto the big name ones. I was disappointed, however, to find that no Xavier Dolan films were mentioned, since he's one of my favorite directors and makes amazing films, many of which are queer films. Overall, however, it's a nice roundup of some good films to watch and rewatch.
Read more
One person found this helpful
Report abuse

JWL
5.0 out of 5 stars A Gay Cinema Book to Own
Reviewed in the United States on 18 October 2009
Verified Purchase
This book gives a great in-depth look at gay cinema and how far the movie industry has come all these years. It also gives you insight on the stars, background of the actors and in general, full info on the movies of the period. Highly recommend this book to all movie buffs.
Read more
2 people found this helpful
Report abuse
See all reviews
Back to top
Get to Know Us
Make Money with Us
Let Us Help You
And don't forget:
© 1996-2021, Amazon.com, Inc. or its affiliates