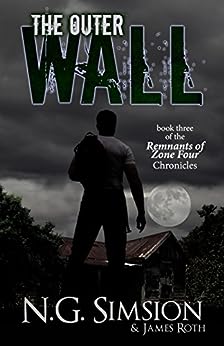 The Elite of society chose a muggy swampland for the location of a school. With its crocodile-infested waters, it was the perfect location to build a parameter wall that towered above the trees, serving as a barrier between them and the dangers of the “old world” where a virus has infected the human population and reduced them to the level of mindless animals.
Zero prefers to keep his life simple. Although he is easily one of the largest and cleverest boys in his year, he runs from any sign of confrontation. His best friend—his only friend—is nothing like him. Lefty is obsessed with the world outside of the city walls, pushing the boundaries set by society's Elite every chance he gets. It’s only a matter of time before they have gone too far and they’re forced to face the horrors of the old world on their own. Can they survive and learn to coexist with those in the old world? Are the Remnants of the old world even the worst of their problems, or do the Elite of their own society pose an even greater threat?
Read more
Previous page
Next page

Nicholas "N.G." Simsion was born in Washington D.C. Along with his five siblings, he and his military family moved around a lot, living in eight different houses by the time he left for college at age seventeen. Although he has no family still living in Fallon, Nevada, he still considers that little oasis in the desert to be his childhood hometown.

When he isn't writing, he's captain of a softball team, singer/guitar player for a band he formed with his three brothers, watching baseball, and playing disc golf. Above all he loves spending time with his wife and two kids.

He and his family live in Meridian, Idaho.

4.1 out of 5 stars
4.1 out of 5
5 global ratings
How are ratings calculated?
To calculate the overall star rating and percentage breakdown by star, we don’t use a simple average. Instead, our system considers things like how recent a review is and if the reviewer bought the item on Amazon. It also analyses reviews to verify trustworthiness.

Amazon Customer
5.0 out of 5 stars Rattling good tale
Reviewed in the United Kingdom on 17 July 2017
Verified Purchase
Seamlessly flows along at a rapid pace. Nicely edited with no obvious errors and no bad language. Would be suitable for all age groups. I very much enjoy this author.
Read more
Report abuse

Katie McD
4.0 out of 5 stars Enjoying this series, but...
Reviewed in the United States on 8 August 2017
Verified Purchase
Very unique and creative storyline, but the book lengths are kind of a tease. Way too short. They each seem like a chapter. That being said, the ploy works. I like them enough to go back for more, but it is annoying to have to stop when I am really getting into it just to have to get online for the next book.
Read more
Report abuse

Amazon Customer
4.0 out of 5 stars Book mix up by publisher big let down. I really think I shouldn't have had to pay for book 4
Reviewed in the United States on 12 July 2016
Verified Purchase
Well I would've enjoyed this book a lot more if the publisher hadn't messed up and sent me #4 first and though a little confusing at first, I read it before #3! After reading what I thought was book 3 I tried to download #4 just to find it to be the same book as what I thought was #3. Confused? So was I. After calling Amazon and getting it ironed out, they sent me book 3 to download. It definitely ruined all the great surprises in book 4! Rats! It's such a great read but I was let down by the mid up and the spoilers.
Read more
One person found this helpful
Report abuse
See all reviews
Back to top
Get to Know Us
Make Money with Us
Let Us Help You
And don't forget:
© 1996-2022, Amazon.com, Inc. or its affiliates