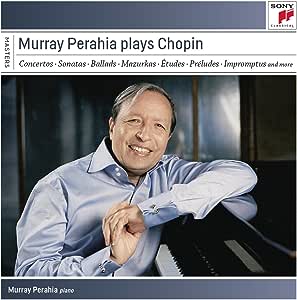 Drawn from the worldwide holdings of Sony Classical Music and re-mastered in 24bit High Resolution Audio, these smart, desirable and collectible EU (Germany) pressed import multi-disc editions, replete with legendary artists, offer many of the finest, most sought-after recordings in the classical discography. The slender, shelf-friendly box frontages feature large, prominently displayed photos of the editions featured artist, work listings at the back, with the CDs themselves housed in protective sleeves that divulge the recording specifics for each performance.

4.7 out of 5 stars
4.7 out of 5
50 global ratings
How are ratings calculated?
To calculate the overall star rating and percentage breakdown by star, we don’t use a simple average. Instead, our system considers things like how recent a review is and if the reviewer bought the item on Amazon. It also analyses reviews to verify trustworthiness.

I. Giles
5.0 out of 5 stars Overall this box offers remarkable value with some truly remarkable music insights and rewards from Perahia.
Reviewed in the United Kingdom on 19 April 2017
Verified Purchase
Reviewing this compilation box set has been an interesting experience of renewal as it was reviewed by listening to the discs in the order of recording which matched the order in which they were originally bought starting with LPs and concluding with CDs. Only the concerto disc was previously unheard and was much better than some other reviewers had indicated.

The sonatas opened this survey and were recorded in 1973 when Perahia was a young man with a reputation to consolidate. At that time Chopin was often played in ways that under-played the emotional turmoil of the music clearly indicated with frequent discordant harmonies and challengingly fast and furious passage work. Perahia here tackles these aspects head on and one can be in little doubt about the unsettled state of mind of the composer. The final movement’s instruction of ‘attacca’ simply means without a pause but Perahia’s delivery allows for a clearly unsettling viewpoint following on as he does from a relatively sober and grim funeral movement.

The Preludes recorded in 1975 take this awareness of discord, turbulence and aggression to levels that can only be described as startling. For a young collector at that time the LP was revelatory and alternative graceful, genteel and subtle versions, including variants of those concepts simply lacked the bite and anger of a troubled mind that is implicit in the music. Curiously this recording never made it to CD until now. Years after removing LPs from the collection, this was the sole reason for purchasing the set which contains so much already owned. It does not disappoint this much older listener and still has powerful shock value. Was it Sony or Perahia’s decision not to make it available on CD until now?

The answer may lie in the remaining solo discs, all of which have received copious and well-deserved praise from collectors and the music press alike. The Impromptus from 1984, the Ballades from 1994, and the Etudes from 2001 plus various other included pieces all exhibit numerous insights based on ever increasing command of the subtle characteristics accompanied by a marked reduction of the earlier volatile turbulence that so marked the earlier recordings in this series. In this way these later recordings fall more easily within the expected and more normal emotional parameters to be found in other recordings of considerable note. This move away from the earlier confrontational style of the sonatas and Preludes is also apparent in the ‘live’ recordings of the two concertos from 1989 which are outstanding in a more conventional style.

The concertos have a livelier and more alert accompaniment and quality of recorded sound than some reviewers have previously commented upon. This may be the result of the new 24 bit processing. Even the earliest two analogue recordings from 1970 and 1973 are better presented than previously even though the sound is still a little hard – however it matches the nature of those specific readings well and therefore seems appropriate.

As with other boxes in this series there are no written notes supplied in the form of a booklet or leaflet. Why not simply reprint the information already created for the original discs?

Ultrarunner
5.0 out of 5 stars The brilliant Perahia
Reviewed in the United Kingdom on 7 April 2017
Verified Purchase
I do not own the Perahia 40 years box set, which after listening to this 15 CD set you may wish to. At the time I bought the Glenn Gould box set, for I like his quirky approach to playing. I also own the DGG Richter and Ashkenazy sets as well. Being an award collection you get to hear the best of this pianist which is all you may feel you need, for some collectors do not like buying huge box sets of over 60 CD's. I do not mind, odd size boxes and all. This set would suit those new to collecting.

This set is small covered by white velvet material. The lid covers the box and opens sideways, which allows you to place inside the cover of the CD you are playing. The sleeves are the originals, the CD number is on the spine which is quite useful. The CBS Masterworks are like a record, with the centre the same as the original LP-with digital upon the label, composer and music to be played. From CD 5 onwards the CD is white, with CD number, composer and music to be played in bigger letters then the CBS CD's. On the back of the sleeve track numbers and music to be played. The first four CDs do not have this, simply a essay in very small writing, but this is in the booklet.

The essay "an abundance of awards. Murray Perahia's prizewinning Recordings. Translated in German and French. Tracklist with a picture of the original sleeve and original liners notes which you can actually read. You do not need a spyglass to read them. Pictures of Perahia.

Nothing is mentioned about the CD's being remastered, except they are all stereo and Digital and the sound is fine.

Perehia is not from the huge sound of the Romantic school, but he is faithful to the score, thus playing what the composer wrote. His approach to the theme by Handel by Brahms, is limpid, quick tempo's, and you can hear every note, like a well spoken English actor.

The reviews are in the same order as the CD's in the box set.

MOZART: Concerto for Piano and orchestra no 15 and 16. English Chamber Orchestra, direction Perahia. Gramophone Award 1984. Best Concerto recording. Perahia's are superbly imaginative readings, full of seemingly spontaneous touches and turns of phrase very personal to him, which yet never sound mannered. Both these performances are very special indeed.

BEETHOVEN Piano Concerto No 3 & 4. Concertgebouw orchestra Conductor Bernard Haitink. Gramophone award 1986. Best concerto recording. Perahia gives readings that are at once intensely poetic and individual, but also strong, with pointing and shading of passage-work that consistently convey the magic of the moment caught on the wing.

BARTOK: sonata for 2 pianos and Percussion. BRAHMS: Variations for 2 pianos on a theme by Joseph Haydn. Perahia & Solti piano. Corkhill and Glennie percusssion. Grammy award 1989. Best chamber music performance. A highly creative partnership produces a vivid and strongly characterized performance. Hungarian Solti had the rare distinction, of having turned the pages for Bartok's wife. the pianist Ditta Pasztory, when she and the composer gave the work's premiere in 1938. However Hungarian Nikisch who died in 1922, was the first modern conductor, who made him a pillar of society, also that a conductor should interpret the score subjectively. He influenced Solti, other Hungarians Szell, Ormandy, Fricsay, Dorati, Kertesz and mentored Fritz Reiner. Nikisch also fired the imagination of Furtwangler, Monteux, Kousssevitsky and Ansermet.

HANDEL: Suite No 5, Chaconne in G major with 21 variations. Suite No 3, suite No 2. SCARLATTI: Sonatas K491, K27, K247, K29, K537, K206, K212. Gramophone Award 1997. Best instrument recording. Midem Cannes Classical Award 1997. These works are for the harpsichordist , but Peraha is quite successful in translating these works to the piano. Where required his tempi are ever faster, a daredevil edge which they must have. He has the experience and virtuosity to pull off these pieces transcribed for the piano.

BACH: English Suite No 1, No 3, No 6. Grammy Award 1999, Best instrumental soloist Performance, Echo Klassik award 1999 17th/18th century. In this pianists hands the forward flow is a living thing in itself, and the listener is always made conscious of the richness of the underlying harmony, especially in the Sarabandes, which are played very beautifully indeed. The lighter dance movements have a refreshing lightness of articulation, with the decoration made to seem integral. His mastery is such that, while this personalized Bach, using a full range of pianistic colour with a disarming naturalness, there is never any suggestion of self-awareness.

BACH: Concerto for keyboard, strings and continuo No 3, No 5, No 6 No 7. Academy of St Martin in the Field. Echo Klassik award 2003. As well as being immensely vital, Perahia's Bach is profoundly pianistic, but not in a exhibitionistic sense, but in the way tempo, dynamics and nuance register without undue exaggeration.

CHOPIN: 12 Etudes op 10. 12 Etudes op 25. Grammy Award 2003. Best instrumental soloist Performance. Gramophone Award 2003. Best instrumental recording. His virtuosity is totally self-effacing, so that the listener's engagement with Chopin's world is complete. There is not the slightest trace of self-awareness, only a total dedication to the musical vision on the page.

BACH: Concerto for Flute,violin, Keyboard and strings. Brandenburg Concerto No 5. Italian Concerto in F major. Echo Klassik award 2004.
The overriding impression is of intelligence, sensitivity and drama tempered by humility

BACH: Partita No 2, 3 ,4. Diapason d'or 2008. Echo Klassik Award 2008. 17th/18th Century.Midem Cannes Classical Award 2008. In this pianists hands, Bach's Partitas not only work well on the modern grand but sound completely at home. His tempi always seem right for what the music has to express, as opposed to that Perahia wants to express in the music.

BRAHMS: Variations and Fugue in B flat major on a theme by Handel. 2 Rhapsodies op 79. 6 piano pieces.op 118. 4 piano pieces op 119. Gramophone 2011. best instrumental recording. Echo Klassik Award 2011. Instrumentalist of the year. Perahia manages to get right inside Brahms piano music and bring alive some of the lovely melodies in these pieces.

Gerry 'M'
5.0 out of 5 stars If you are someone who enjoys the best things in life (culturally speaking of course!) and appreciates good value. BUY NOW!
Reviewed in the United Kingdom on 27 June 2017
Verified Purchase
Murray Perahia is one of the World's great pianists and the breadth and scope of his talent are breathtaking. This 'Awards Collection' is exceptional value and provides many hours of listening pleasure. I doubt if you will ever hear these pieces played any better. ENJOY!
Read more
2 people found this helpful
Report abuse

Adi H. Jehangir
5.0 out of 5 stars Unbelievable bargain !
Reviewed in the United Kingdom on 3 March 2017
Verified Purchase
What a superb interpreter of Chopin is Perahia. A priceless set at virtually a throwaway price !
Read more
3 people found this helpful
Report abuse

boz
5.0 out of 5 stars A brilliant insight to Chopin's moods
Reviewed in the United Kingdom on 26 February 2018
Verified Purchase
Others with more musical knowledge than me have said it all. A brilliant insight to Chopin's moods, wonderfully interpreted by Murray Perahia as always.
Read more
Report abuse
See all reviews
Back to top
Get to Know Us
Make Money with Us
Let Us Help You
And don't forget:
© 1996-2021, Amazon.com, Inc. or its affiliates