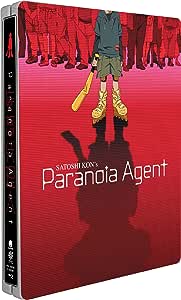 Secure transaction
Your transaction is secure
We work hard to protect your security and privacy. Our payment security system encrypts your information during transmission. We don’t share your credit card details with third-party sellers, and we don’t sell your information to others. Learn more
Details
Ships from
Amazon US
Sold by
Amazon US
Paranoia Agent [Blu-ray] has been added to your Cart
New (2) from
$70.70 + $4.99 Delivery

From Satoshi Kon, director of Paprika, Perfect Blue, and Millennium Actress. Truth is stranger than fiction. The line between belief and reality is challenged in this dark and mysterious psychological thriller where citizens across Musashino City are being assaulted and terrorized. Now, two detectives must figure out the truth about Lil' Slugger.

4.9 out of 5 stars
4.9 out of 5
147 global ratings
How are ratings calculated?
To calculate the overall star rating and percentage breakdown by star, we don’t use a simple average. Instead, our system considers things like how recent a review is and if the reviewer bought the item on Amazon. It also analyses reviews to verify trustworthiness.

Dirk leon
1.0 out of 5 stars Terrible transfer, amazing show.
Reviewed in the United States on 23 January 2021
Verified Purchase
No need to go into the show, its amazing. Geneon released back in 2004ish and it was ana amazing release then.
Show is 5 stars
The actual transfer though is poor.
Other companies have transfered older anime with successful results yet, Funimation ... decided to transfer the DVD basically onto a bluray and not bother to filter clean it up in the slightest.
Discotek media released Fatal Fury The motion picture on bluray, a film from 1994 and made it look like it had only been created in the 2010s.... why wasn't this amount of love given to the transfer for a show that was released in 2004?
Again, I love the show it deserves a 5 star count for its content alone.
The transfer ... 1 star.
Read more
7 people found this helpful
Report abuse

Roochak
5.0 out of 5 stars Don't look now, but...
Reviewed in the United States on 25 December 2020
Verified Purchase
Satoshi Kon (1963-2010) is not an easy filmmaker to pigeonhole. The adult mystery/thriller PERFECT BLUE (1997), the hallucinatory romance MILLENIUM ACTRESS (2001), the Christmas comedy TOKYO GODFATHERS (2003) -- Kon was not an artist who liked to repeat himself. The TV series PARANOIA AGENT (2004) at first seems like a return to the mystery/thriller genre, but as the story wades deeper into science fiction/horror territory, with an ensemble cast whose members are neither completely reliable nor completely sympathetic, there's something going on here that's not easy to grasp.

I'm sure PARANOIA AGENT is more than just a compulsively watchable puzzle that Kon gave his audience to solve, but what's it really about? Everyone's guilty of something, and acting out of necessity, but at a terrible moral and psychological cost. Ordinary people, from all walks of life, do appalling things, and convince themselves they're not to blame, and slowly, blamelessly, usher in their own destruction...but what about that grinning, homicidal kid with the baseball bat?

The violence is more stylized and less graphic than that in PERFECT BLUE, but PARANOIA AGENT does have some nudity and a brief sex scene between an ugly man and a prostitute. The ending, while powerful, raises as many questions as it answers, and the whole series depicts urban Japan as a time bomb on the verge of exploding, which it does in the apocalyptic climax. Please don't "understand" it too quickly.
Read more
5 people found this helpful
Report abuse

Martin
5.0 out of 5 stars Really cool packaging!
Reviewed in the United States on 17 December 2020
Verified Purchase
I love this steelbook! The artistic design is great, and I really like how they put together the set. Two discs neatly hold the full series, and the steel case is covered in very well designed art, little slugger adorning the front and back, and the interior featuring some adorable art of one of the main characters. Worth the price.
As for the series, if you haven't seen it, it's an incredible horror fiction, with some very interesting insight into human character, the power of rumors and myth, and what our place is within society and within our own lives. Great soundtrack and beautiful animation.
Read more
4 people found this helpful
Report abuse

John Ronald
5.0 out of 5 stars Even darker than I remember!
Reviewed in the United States on 3 February 2021
Verified Purchase
I watched Paranoia Agent when it first came out, probably via rental DVD. It's fantastic that FUNimation has license rescued and released this one and only television series produced by legendary Japanese filmmaker Satoshi Kon.

I have to say, watching Paranoia Agent as a much more mature adult the 2nd time through, this is a much darker story than I first remembered...darker even than Perfect Blue, which is pretty dark and disturbing in its own right.
It is also darkly funny. Ep.10 is clearly a bit autobiographical and I read it as Kon own j'accuse towards his bosses and audience alike. The finale is very Brechtian and an exhortation to shut-in otaku to get outside and embrace life itself, that art & escapist fiction is fine up to a point but aren't actually a replacement for real life nor should they be. I also, upon re-watch, picked up that Tsukiko, in flashback, is suffering from menstrual cramps that make her let go of Maromi's leash as she doubles over in pain. The splash of blood from the car wreck serves a dual symbolic role...not only signaling the violet death of a beloved pet but also menstrual blood and the loss of childhood innocence as Tsukiko blossoms into womanhood. But this is so intensely personal that the idea of telling her very strict, emotionally distant father the truth of what happened is too mortifying, and thus Lil' Slugger is born. There is a great deal more one could say about Paranoia Agent and its equally compelling side characters, too...but Tsukiko's journey drives everything else. When she enters the memory-space as an adult and cradles real Maromi's lifeless body and apologizes to him, it's a real breakthrough for her and she's able to move on. It's just a shame she couldn't have reached this epiphany on a therapist's couch instead of wrecking a large swath of Tokyo.
Read more
2 people found this helpful
Report abuse

Gil Rivera
5.0 out of 5 stars A Satoshi Kon Masterwork!
Reviewed in the United States on 31 December 2020
Verified Purchase
Seriously, this is one of my favorite Anime series of all time. It was one of the first I ever watched and got into, back when it aired on Adult Swim, and I got my brother to find the obscure DVD releases for me when I was kid. Stupid me lost all of them sometime ago and they were worth a fortune now on Ebay, of course.

So glad Funimation stepped in to give this a proper modern release. This is an amazing surreal drama mini-series with a interesting mix of horror and dark satire. It wowed me when I was younger although I didn't understand everything at first. Years later certain meanings still evade me but I always come back to dig more and more at the core story. This is absolutely one of, if not THE, best works of Satoshi Kon and should definitely be seen.
Read more
2 people found this helpful
Report abuse
See all reviews
Back to top
Get to Know Us
Make Money with Us
Let Us Help You
And don't forget:
© 1996-2021, Amazon.com, Inc. or its affiliates