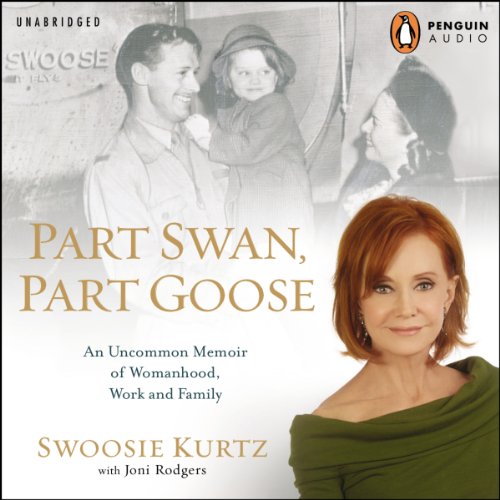 In a wise, warmhearted memoir that celebrates her extraordinary life and stellar career, Swoosie Kurtz shares just the right combination of personal misadventure and showbiz lore, candidly reflecting on the right choices that empowered her, the wrong choices that enlightened her, and the intimate journey of caring for an aging parent.

Animating this remarkable memoir is Swoosie’s relationship with her equally remarkable parents. Her father, Frank, was an Olympic athlete and highly decorated World War II airman. He flew a record number of missions in a cobbled-together B-17D called the Swoose. Her mother, Margo, was the quintessential military wife but with the spunk and will to match her husband’s. Her 1945 memoir, My Rival, the Sky, chronicled their lives up to the time of the birth of their daughter.

Today, Margo, who is fast approaching her 100th birthday, lives with Swoosie. And Swoosie’s life has become a precarious and precious balancing act as she struggles to stay ahead of her mother’s increasing needs while navigating a showbiz career that keeps one foot in Hollywood and the other on Broadway.

Switch between reading the Kindle book & listening to the Audible narration with Whispersync for Voice.
Get the Audible audiobook for the reduced price of $12.49 after you buy the Kindle book.
Last chance - Ends Thursday!
Learn more about membership
By completing your purchase, you agree to Audible’s Conditions Of Use and Privacy Notice.
Sold and delivered by Audible, an Amazon company

C. Abbott
5.0 out of 5 stars The Celebration of a Family....not just another 'how I became famous' stories.
Reviewed in the United States on 15 February 2018
Verified Purchase
Ever read about a celebrity and feel you are being given the version that will rake in the greatest amount of money? Well this book is not like that at all. I have always loved Swoosie Kurtz ever since I was a little girl. Lately I began to wonder more about the real woman behind the acting. She seems so warm and honest. I love how she doesn't just bring in the very sad stories of her mother but brings her and her father to life. People are not simply born famous actors, a mother, a father, etc. We gradually shift into different areas that make us who we are as we grow and age. I love how her mother is taken care of. I love how the book celebrates a very dear family.
Read more
One person found this helpful
Report abuse

AlexsDad
5.0 out of 5 stars Long time fan of Swoosie Kurtz -- adored her memoir
Reviewed in the United States on 17 June 2014
Verified Purchase
I first became aware of Swoosie Kurtz as a cast member of Mary Tyler Moore's abysmal attempt at a variety show in her 1978 series, "Mary." A few years later I watched her in the sitcom, "Love, Sidney." Over the years I have seen most of her tv shows and several of her movies. Swoosie is an amazing talent, a true character actress. She's not a personality actress like so many others. I have been impressed with the fact that Swoosie is sometimes a lead and sometimes a supporting actress just like Cloris Leachman and Betty White. Swoosie's memoir is filled with the tale of her life and her parents' lives, her broadway, tv, and movie roles, and more. Swoosie is currently working on "Mike & Molly." I am even more of a fan of Swoosie after reading her story.
Read more
Report abuse

ccas
4.0 out of 5 stars Good book
Reviewed in the United States on 14 May 2014
Verified Purchase
Worth the read. I appreciated the honesty in her struggles with her aging parents. I took care of my Dad during his last years and its tough and it's tender. No one does it perfect and we always feel guilty about some of it.
Read more
8 people found this helpful
Report abuse