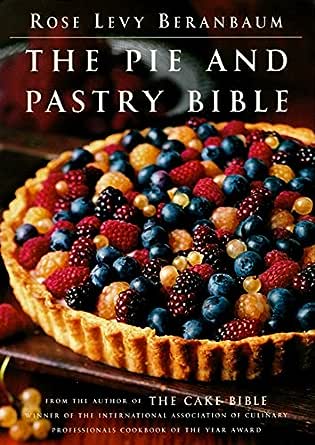 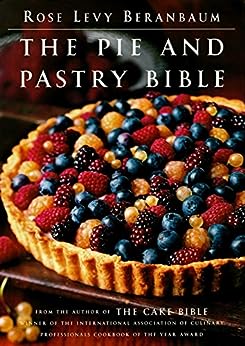 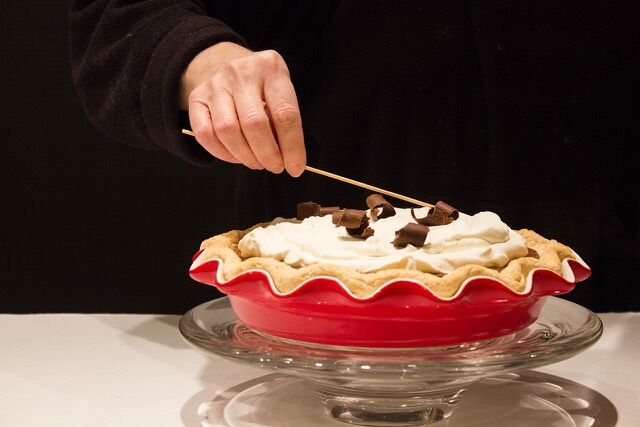 Rose Levy Bernabaum, a frequent contributor to all the major food magazines and The New York Times, is a consultant to the baking and chocolate industries. Her definitive work on cakes, The Cake Bible, won the Cookbook of the Year Award from the International Association of Culinary Professionals. Rose's research for The Pie and Pastry Bible included a strudel pilgrimage to Austria, a fact-finding Danish mission to Denmark, and travel and study throughout France, Switzerland, Hungary, and Germany. She lives in New York City. --This text refers to the hardcover edition.

I have been thinking of this book as The Pastry Bible for ten years now, since the publication of The Cake Bible. But after much discussion, I decided to give it the title The Pie and Pastry Bible because I discovered that most people do not know exactly what "pastry" means or that pies are also pastry.

The Oxford dictionary defines pastry as: "Dough made of flour, fat and water, used for covering pies or holding filling."

The writer couldn't have known the pleasure of a fresh tart cherry pie or of a flaky, buttery croissant, or his definition would never have remained so dispassionately matter-of-fact.

I did not grow up with much of a pastry tradition. Neither my mother nor grandmother baked. Once in a while I was treated to either a bakery prune Danish or &233;clair but that was it. Sunday morning breakfast was a buttered bagel. My father, a cabinet maker, also provided the greater New York and New Jersey area bagel factories with wooden peels, and the fringe benefit was a weekly string of fresh bagels.

The first pie I ever attempted was cherry pie, using prepared pie filling. It was during Thanksgiving break of my freshman year at the University of Vermont. I had just learned the basic techniques of pie making in class and wanted to please and surprise my father. It turned out that everyone else in the family was surprised as well but in different and disagreeable ways! The oven in our city apartment had never been used except to store pots and pans. My mother, who was afraid of lighting an oven that had been dormant so long, made a long "fuse" from a paper towel and took me into the living room, covering her ears. A few minutes later, when the flame reached the escaping gas, there was the loud explosion she had anticipated (not to mention unnecessarily created). Minutes later, my grandmother (whose domain the kitchen actually was) came running in crying, "The soap, the soap!" It turned out she stored her bars of soap for dishwashing in the broiler under the oven. The soap, by then, was melted and bubbling (much to my amusement). But the worst surprise was yet to come. During the baking of the pie, the cherry juice started bubbling out of the pie and onto the floor of the oven where it started to burn and smoke. Apparently the steam vents I had carefully cut into the top crust had resealed from the thick juices of the sugared cherries.

At Christmas break I tried again, this time lighting the oven myself -- though I did forget to remove the soap again. My creative though absurd solution to the sealed vents was to insert little straws in them so that the juices could bubble up and down without spilling. Finally, I discovered that all that is necessary is to make little cutouts, which, unlike the slits, cannot reseal. But these days I prefer a lattice crust for my cherry pies. The fruit is simply too beautiful to hide.

My next attempt at pie was two years later as a new bride. I wanted to surprise my Vermont husband with a New England specialty he claimed to enjoy: pumpkin pie. As I was emptying the contents of the can into the pie shell, I licked my finger, which confirmed my suspicion that this was not a pie I was going to like. When I presented it for that evening's dessert, I couldn't resist adding: "I don't know how you can eat this; it tastes like a barnyard." To which he answered: "It does and I can't! What did you put in it?" "Pumpkin." I said, thinking what a ridiculously obvious question. "What else?" he asked. "What else goes in?" I queried. "Eggs, brown sugar, spices, vanilla," he enumerated as I sat there feeling like a total fool. Coincidentally, I was reading James Michener's Sayonara, in which the Japanese bride did the same thing, making her American husband a pumpkin pie using only canned pumpkin without sweetener or flavorings, thinking that it was pumpkin pie that somehow appealed to Western taste. It made me feel a lot better. (Too bad I hadn't reached that chapter before my own misadventure!) The next week I tried again, making it from scratch. To my surprise I loved it. It took me thirty years to achieve what I consider to be the state-of-the-art pumpkin pie.

Making pie crust and other pastries was another story. Pie crust, in particular, never came out the same way twice in a row. My goal in writing this book was to delve into the mysteries of pie crusts so that they would always come out the way I wanted them to be -- tender and flaky -- and if not, to understand why. My goal was also to convey this knowledge in a way that would encourage and enable others to do the same. This was far more of a challenge than cake baking. When it comes to cake, if one follows the rules, perfection is inevitable. But for pastry you must be somewhat of an interpretive artist as well as disciplined technician. You have to develop a sense of the dough: when it needs to be chilled or when it needs to be a little more moist. The best way to become proficient is by doing it often. And here's the motivation: The best pastry is made at home. This is because it can receive individual attention and optimal conditions. Try making a flaky pie crust in a 100°F. restaurant kitchen and I'm sure you'll agree. Also, there is nothing more empowering than the thrill of achieving good pastry. I'll always remember my first puff pastry. My housekeeper and I sat spellbound before the oven, watching it swell open and rise. It seemed alive. It was sheer magic. I also cherish the memory of my nephew Alexander unmolding his first tartlet when he was a little boy (and didn't kiss girls). The dough had taken on the attractive design of the fluted mold and he was so thrilled he forgot the rules and kissed me!

Many people think of me as "the cake lady," but the truth is I am more a pastry person! I love cake, but I adore pastry because of its multiplicity of textures and prevalence of juicy, flavorful fruit. I have had the pleasure of developing the recipes in this book for more than ten years. All were enjoyable, but I have included only those I personally would want to have again and again.

My fondest wish is that everyone will know the goodness of making and eating wonderful pastry. Then they will walk down the street with a secret little smile on their faces -- like mine.

4.7 out of 5 stars
4.7 out of 5
474 global ratings
How are ratings calculated?
To calculate the overall star rating and percentage breakdown by star, we don’t use a simple average. Instead, our system considers things like how recent a review is and if the reviewer bought the item on Amazon. It also analyses reviews to verify trustworthiness.

AS Forrester
5.0 out of 5 stars Timeless Perfection
Reviewed in Australia on 21 October 2020
Verified Purchase
Our family has built memories around The Pie and Pastry Bible. Seriously. Nearly failproof recipes and directions and so very delicious. My original copy was lost in a move and I turned over the earth to get two copies, one for my daughter and one for myself. I think a little of my heart is in this book and it makes me smile.
Read more
Helpful
Report abuse
See all reviews

Amazon Customer
5.0 out of 5 stars Cook book.
Reviewed in the United Kingdom on 18 March 2016
Verified Purchase
This was a very welcomed gift for my partner, who is new to baking. He absolutely loves it. very informative with tips along the way. Very different from other cook books,not as many photos ( this isn't a bad thing) I feel this book is for the confident baker who wishes to learn more and progress in their carer, if not used to reading or prepared to test yourself and continue to love baking this book could be heavy going. I'm enjoying the book.
Read more
Report abuse

VICTORIA L. ADAMU
5.0 out of 5 stars Five Stars
Reviewed in the United Kingdom on 18 February 2016
Verified Purchase
It's a great book for any Baker. Thanks a lot.
Read more
Report abuse

Dave L
5.0 out of 5 stars So many pies...
Reviewed in Canada on 8 December 2017
Verified Purchase
Unspeakably, ridiculously, amazingly good. I can't even begin to go into how much I love this book. I've tried almost a dozen recipes from this book and haven't had a loser yet. While I find some of her instructions to be a bit over the top (putting the frozen chunks of butter in a ziploc bag with the flour and rolling the whole thing out is ungodly time consuming, despite being a very reliable way to get a flaky crust) they never fail to give an excellent result. The savory items are also spectacular. I've made the cheese pastry wrapped meatloaf twice now and loved it both times. Absolutely recommend this book if you're serious about pastry.
Read more
2 people found this helpful
Report abuse

Read more
One person found this helpful
Report abuse
Translate review to English
See all reviews
Back to top
Get to Know Us
Make Money with Us
Let Us Help You
And don't forget:
© 1996-2021, Amazon.com, Inc. or its affiliates