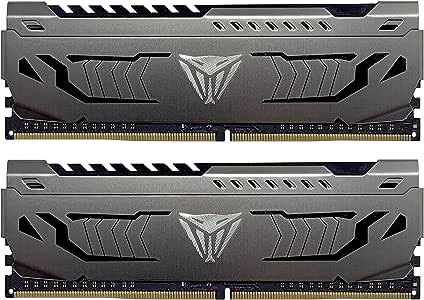 4.6 out of 5 stars
4.6 out of 5
2,835 global ratings
How are ratings calculated?
To calculate the overall star rating and percentage breakdown by star, we don’t use a simple average. Instead, our system considers things like how recent a review is and if the reviewer bought the item on Amazon. It also analyses reviews to verify trustworthiness.

Ben
5.0 out of 5 stars Great ram! Samsung B Die :)
Reviewed in Australia on 5 March 2020
Style Name: DUAL KITSCapacity: 8GBx2 4400MHzVerified Purchase
Great memory and very fast. I am running them on a Asus Maximus XI Extreme at 4100mhz 17 17 17 37 speed so you can tighten the timings easily. Unfortunately booting at 4400mhz I can't quite get them stable but that is probably due to my motherboard/cpu internal memory controller perhaps not being strong enough (using 9900k). Perhaps with more tinkering I could get it stable but I can't be bothered for now. I'm sure if you had a 2 ram slot motherboard e.g Apex easier to hit 4400mhz stable. Personally I dislike all the RGB so fast memory that looked cool matching my build and no lighting was a super plus for me. No need to install extra bloatware so I can disable lights :) I would buy them again.

Update: changed motherboard to a Asus XI Apex and can now use these at 4400mhz stable no errors and even 4600mhz eith slight voltage bump but haven't tested for errors at this higher speed.

William Higgins
5.0 out of 5 stars Very cheap B-die that clocks insanely well
Reviewed in Australia on 21 September 2020
Style Name: DUAL KITSCapacity: 8GBx2 4400MHzVerified Purchase
I have purposely waited until i got my second kit before making my review. I now have 4x8gb of the 4400mhz C19 sticks in my build. If you have some understanding on what to do with RAM overclocking, this is the kit for you. Currently running 4266mhz C19 at 1.35v on an Aorus Elite Z490 with 10700k using XMP2. Impressed these kits can manage this frequency with 32gb in a 4x config. Big thanks to BuildZoid over at Actually Hardcore Overclocking as well for recommending these kits and having guides on how to tweak them
Read more
Helpful
Comment Report abuse

Hunk.ktm
5.0 out of 5 stars Dell G7 users get this gaming RAM...!!
Reviewed in Australia on 18 August 2020
Style Name: SO DIMM (LAPTOP)Capacity: 3000MHz 16gbVerified Purchase
Item arrived quickly & was well packaged. I installed the RAM on my Dell G7 7588 laptop to upgrade from 16GB to 32GB. It is working well and at base speed 2666MHz. I know these modules support XMP and I am hoping there would be bios update in future where I can make full use of RAM capability. All good for now. Happy to recommend it to any one looking to upgrade their DELL G7 laptop RAM.
Read more

Joe On
5.0 out of 5 stars Great RAM Module for the Price!
Reviewed in Australia on 18 June 2020
Style Name: SO DIMM (LAPTOP)Capacity: 2666MHz 8gbVerified Purchase
Bought this last September to boost the performance of my Legion Y540 gaming laptop as it only came with one 8GB RAM stick. Works like a champ in dual-channel memory! It's almost 10 months already and have never experienced any performance issues! Great for both gaming & multitasking! Highly recommended!
Read more

Paolo Tan
5.0 out of 5 stars Quality & Value for Money
Reviewed in Australia on 16 October 2020
Style Name: DUAL KITSCapacity: 8GBx2 3200MHzVerified Purchase
It's been a decade since I built my last desktop PC and a lot has changed. There's a lot of choices out there and very difficult to decide which is which. Took a stab at this Patriot RAM and glad I did, price was really good and build quality is amazing. Good metal parts and very sturdy, and it does what it does - access data fast!
Read more
Helpful
Comment Report abuse

"beamerboy"
5.0 out of 5 stars Great for supplementing latest iMac RAM
Reviewed in Australia on 11 September 2020
Style Name: SO DIMM (LAPTOP)Capacity: 2666MHz 16gbVerified Purchase
I bought these SO-DIMMs to add to the standard factory 8GB RAM supplied in my new 2020 27" 5K iMac. Price was very good, and also had the lowest latency (CL) score of the offerings. I added them into the spare banks on the iMac once I got it, and they fitted in fine, and worked from startup. No hassles, headaches or issues ever since. Recognised as installed by both the MacOS and Windows 10 (using Boot Camp).
Read more
Helpful
Comment Report abuse

Does 4400mhz CL19 which means for Ryzen it will do 3733mhz CL14 which is the fastest that Infinity Fabric will support at it's native speed, which means +20% fps for gaming and much lower minimal fps drops.

Tom006k
5.0 out of 5 stars Works great, if you know what you're doing.
Reviewed in the United Kingdom on 15 December 2019
Style Name: DUAL KITSCapacity: 8GBx2 3733MHzVerified Purchase
I see a lot of mixed reviews. It's always important to check compatibility with your motherboard and processor before getting new RAM, especially when intending to overclock it. Motherboards only support up to 2133MHz, previously 1333MHz (or there about, it's been a while since I did my research). Since any overclock has to be the user's decision, the default BIOS settings will always cap the hardware to the highest "stable" speed stated by both the hardware component itself and the motherboard. It's also possible to have RAM that will work with a system, but not be able to be utilised to its full potential due to other limitations, such as the rate that data travels on the board itself.

There are plenty of websites, such as pcpartpicker, that will allow compatibility checking and flag any issues without the user needing to have any technical knowledge on the subject. There are also numerous software tools to set up overclocking, provided by motherboard retailers such as MSI, Gigabyte, ASUS, etc. Each of these tools work differently, and the various components possible in a build make for a lot of factors that these tools must consider. They aren't perfect, and are known to cause unstable settings in some cases. Sometimes it'll be a case of trial-and-error to achieve the settings which provide you with a stable, if not optimal, overclock. In such cases, it's best to find a trustworthy guide. If you've looked around in the BIOS, you'll know that there are a lot of settings; it's not always clear what each one does or whether or not it would be a good idea to modify it. The smallest change can cause your system to fail to boot, and then you need to try to reset everything and start from scratch.

For me, there was no issue with the RAM, directly. I got it because I was buying a new motherboard and CPU and my then-current RAM was incompatible, and I knew my new system would be able to handle the new speeds. That said, I did need to adjust my CPU settings after I overclocked the RAM, though. 16GB of this RAM overclocked to 3773MHz well out performed my older 24GB RAM. I plan to buy it again when I find myself able to justify the cost to double up to 32GB. That's not to say this RAM is overpriced, but it is still an expense.
Read more
9 people found this helpful
Report abuse

Matt Edwards
5.0 out of 5 stars Finally - system stability with no crashes
Reviewed in the United Kingdom on 27 January 2020
Style Name: DUAL KITSCapacity: 8GBx2 3866MHzVerified Purchase
I had initially purchased Corsair Vengeance 3200 RAM for my new build Ryzen 3600 PC. The memory initially worked fine. Then I started to get continual random shutdowns. Having run other tests it pointed to a chipset drive on my MSI B450 Carbon AC system. I swapped out the motherboard for an X570 and initially, all was good. But gradually again I started to have issues. Anything like BF5 or Just Cause 4 would play solidly for 30 minutes on average before I'd get a blue screen crash. I played with various BIOS settings and could only get stability if I underclocked the ram which gave me 10% hit on FPS performance. Tried the Vengeance 3600 variant and experienced similar problems. Finally saw the 3866 Viper Steel series from Patriot and for me, it's been a game-changer. I can run the ram at full speed thanks to the X570 bios - no more crashes, the system is 100% stable. Had no crashes on Battlefield and getting a decent uptick in FPS performance.. I'm a longtime Corsair customer and was nervous about Patriot, but it's honestly been the best decision I've made on the build. No more headaches, if you've got a Ryzen 5 3600 and an X570, then this is a no brainer and also a fair bit cheaper than other alternatives.
Read more
6 people found this helpful
Report abuse

Mark W.
5.0 out of 5 stars Fantastic
Reviewed in the United Kingdom on 10 December 2019
Style Name: DUAL KITSCapacity: 8GBx2 4000MHzVerified Purchase
I wanted to make sure I got Samsung B-die ram and can confirm these sticks (if you buy above 4000mhz kits) are indeed B-die. Amazing value for money. I bought the 4000mhz kit and have downclocked to 3600mhz so I could dial in the timing and get blazing low latency. At 1.45v i'm hitting 14-14-14-28-280-65535 with perfect stability which is awesome.

Just a tip for new buyers. If you want to run over 3600mhz make sure you board is using t-topology and not daisy chaining for the dimm slots.
Read more
7 people found this helpful
Report abuse
See all reviews
Get FREE delivery with Amazon Prime
Prime members enjoy FREE Delivery and exclusive access to movies, TV shows, music, Kindle e-books, Twitch Prime, and more.
> Get Started
Back to top
Get to Know Us
Make Money with Us
Let Us Help You
And don't forget:
© 1996-2020, Amazon.com, Inc. or its affiliates