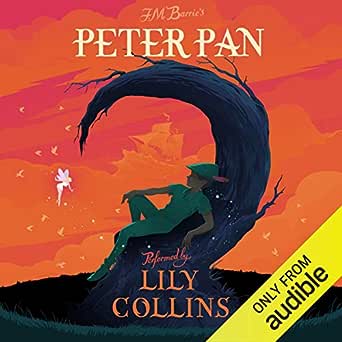 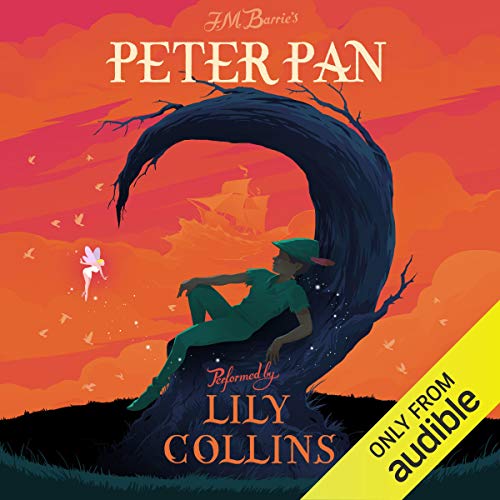 Switch between reading the Kindle book & listening to the Audible narration with Whispersync for Voice.

4.4 out of 5 stars
4.4 out of 5
1,622 global ratings
How are ratings calculated?
To calculate the overall star rating and percentage breakdown by star, we don’t use a simple average. Instead, our system considers things like how recent a review is and if the reviewer bought the item on Amazon. It also analyses reviews to verify trustworthiness.

Amazon Customer Yvonne Scott
5.0 out of 5 stars A much loved Fairy tale, filled with adventures in Neverland,
Reviewed in Australia on 15 April 2015
Verified Purchase
This is a beautifully presented book of JM Barrie's much loved story of the boy who never grows up, and one night see's a girl called Wendy and her brothers, John and Michael. As Peter wants a mother for the lost boys, (a group of boys that has Peter as their leader as he looks after them) he sprinkles Wendy and her brothers with pixie dust and they fly into the night to never land, leaving Nanna, their St Bernard behind and upset. Wendy becomes the lost boys Mother and tells them the bed time stories they vaguely remember their mothers telling them at bed time. As Peter is very fond of Wendy, tinker bell,a fairy and Peters best friend before Wendy arrives, becomes jealous. Peters arch enemy, Captain Hook, so names as Peter in a swordfight cut of his hand and fed it to a crocodile so it was replaced by a steel hook, captures a friend of Peters, Princess Tiger Lily, daughter of the indian chief in never land and Peter goes to save her, and the lost boys led by Wendy, John and MIchael, go to help him.
Read more
One person found this helpful
Helpful
Comment Report abuse

Mindy
1.0 out of 5 stars Don't buy this. Sentences don't even make sense.
Reviewed in Australia on 8 June 2020
Verified Purchase
The sentences do not make any sense at all. Missing words and strange choices of words and insertions in square brackets where there should have been words - pretty much unintelligible. Maybe a computer has tried to translate it. It was hilarious comparing it to the properly written one I had to buy so I could actually read the story - there is a strange logic to some of the word choices. But impossible to read so don't bother getting this if you actually want to read Peter Pan.
Read more
Helpful
Comment Report abuse

Holly
3.0 out of 5 stars Meh.
Reviewed in Australia on 17 June 2020
Verified Purchase
Definitely not actually clothbound. Instead it’s like a textured cardboard or something. I was hoping it would be similar to the penguin clothbound classics but the quality just wasn’t there. Bit disappointed.
Read more
Helpful
Comment Report abuse

Amazon Customer
1.0 out of 5 stars THUMBS DOWN ON THIS ONE
Reviewed in Australia on 29 November 2018
Verified Purchase
Not what I expected. Disappointed that I bought it.
Read more
Helpful
Comment Report abuse

E. A. Solinas
TOP 500 REVIEWER
4.0 out of 5 stars "It is only the gay and innocent and heartless who can fly"
Reviewed in Australia on 12 January 2015
Everybody knows and loves Peter Pan -- the immortal, flying imp who lives in a floating otherworld, battles pirates, and never has to grow up.

And J.M. Barrie's classic tale "Peter Pan" really hasn't lost any of its charm, although those who have only seen the Disney movie may be shocked at how dark it can be at times. It's a strange, whimsical little story with a bittersweet edge, but it also reminds you about the allure of never growing up... even if it is necessary.

Young Wendy Darling is woken by a strange boy in her room, who has lost his shadow. That boy is Peter Pan, a flying boy from Neverland who regularly eavesdrops at her house because he likes the bedtime stories her mother tells. Since Wendy ALSO knows bedtime stories (and can potentially "make pockets"), Peter whisks Wendy and her brothers Michael and John off to Neverland.

However, Neverland is not a place devoid of dangers -- there is a pirate ship there (don't as me how; if it's explained, I don't remember), led by the villainous Captain Hook. Hook is constantly trying to kill Peter and his Lost Boys, and it doesn't take long for Wendy and the other boys to be captured. Can Peter save them from his archnemesis?

Children are "innocent and heartless" by nature, and it feels like "Peter Pan" was a homage to that -- it's a childish romp in a fantasyland, where kids can fly, fight pirates and have strange little adventures. Nobody really thinks about the families that are undoubtedly freaking out, or the lives they'll miss out on.

And really, that's part of its charm. It's a fluffy little fantasy story that could have been transcribed out of any child's imagination, with a colorful array of characters who could have been taken out of a Victorian kid's imaginary games (mermaids I understand, but why are there American Indians here? HOW did they get there?).

And Barrie spins out this story in the slightly twee style of Victorian kids' fiction, with lots of details and some charming scenes (the Lost Boys actually build a house AROUND WENDY). It gets a little cutesy at times (fairies are generated by.... baby laughter?) and the handling of the Indians is just horrible, but otherwise it's a fairly charming book.

But it's also darker than you would expect -- Tinkerbell tricks the Lost Boys into trying to kill Wendy, and at first it looks like she's managed. And Peter almost DIES. For real. Not to mention the final chapter, which is a giant lump of bittersweet.

Peter himself is a strangely enchanting figure -- he's almost like a lost Greek god, with a capricious ever-changing nature. And no matter what, you can never catch him or pin him down. As such, most of the other characters don't quite stand out as much, but they're all pleasantly handled -- particularly the three "normal" kids who are all too happy to go to Neverland, until they feel like going home again.

"Peter Pan" takes you briefly back into the experience of being a small child, when you can easily imagine yourself going anywhere at all while still staying "innocent and heartless." It has some flaws, but is charming nonetheless.

Greg Chapman
5.0 out of 5 stars Classic!
Reviewed in the United Kingdom on 29 September 2020
Verified Purchase
Very pleased to get this. Had read Peter Pan and Wendy many years ago as a child in the 60's, but had never read "Peter Pan in Kensington Gardens"! Looking forward to reading that.

"Peter and Wendy" is a much fuller version than the one that I read in the 60's with my Mum. Mum told me the book she has (and still has) was bought for her by her father (which I reviewed earlier). For the first time, I have seen the texts, and read about J.M Barrie himself! I have also read the notes and explanations at the back of the book, which are extremely interesting.

The only minor thing, is that there are no pictures in the book at all! It is. however, in very good condition, and I am happy with that. Anybody who would be interested in the history, or wants to find out more about J.M Barrie, or is interested in Kensington Gardens (London), or anyone who wants to read a fuller version of Peter Pan should obtain this book!
Read more
Report abuse

Kelly Brownell
3.0 out of 5 stars Good stort bar the racism
Reviewed in the United Kingdom on 6 October 2019
Verified Purchase
Obviously I knew the story already, but wanted at last to read it. I was shocked at how racist it is. Won't be reading again. Yes I know it was a different time, but perhaps the racist language could be amended or a warning put on
Read more
3 people found this helpful
Report abuse

MonkeysMummy
2.0 out of 5 stars So disappointing!
Reviewed in the United Kingdom on 14 December 2018
Verified Purchase
The cover of this book looks exciting. However, this is the 'rough cut' edition which is not mentioned in the product description at all. Rough cut basically means that the edges of the pages are literally rough cut. Looks like someones cut them with a blunt razor blade! As a result, flicking through the book is impossible. In addition, there's not a single illustration!! Not impressed and will be returning for a refund.
Read more
One person found this helpful
Report abuse

Lena
5.0 out of 5 stars Beautiful edition of Peter Pan
Reviewed in the United Kingdom on 21 December 2017
Verified Purchase
This is a gorgeous edition of Peter Pan with beautiful silver gilding on the cover and many full page illustrations within the book. I absolutely love the Barnes & Noble Leatherbound Collection! Would recommend this book to every fairy tale or Disney fan out there.
Read more
One person found this helpful
Report abuse

mrs r l newell
3.0 out of 5 stars Dreadful whisper sync
Reviewed in the United Kingdom on 7 February 2019
Verified Purchase
If this was a review just for the book it would be ⭐️⭐️⭐️⭐️⭐️ However I unfortunately downloaded the audio whyspersync too! That alone would have received ⭐️ At best. Appalling reading, stuttering, slow, misread, wrong intonations and laboured.
Read more
Report abuse
See all reviews
Get FREE delivery with Amazon Prime
Prime members enjoy FREE Delivery and exclusive access to movies, TV shows, music, Kindle e-books, Twitch Prime, and more.
> Get Started
Back to top
Get to Know Us
Make Money with Us
Let Us Help You
And don't forget:
© 1996-2020, Amazon.com, Inc. or its affiliates