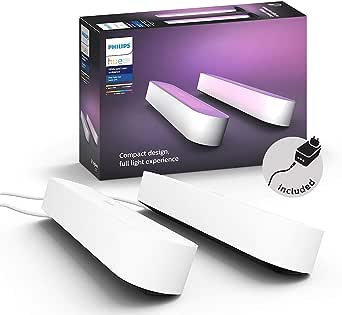 Create a unique light experience for your TV or gaming area with the Philips hue play light bars. With an elegant and compact design, the hue play light bars can be easily integrated it into your home or entertainment area. From mounting it behind your TV/PC monitor to free standing or laying on its side, the versatile design is made to blend into your home seamlessly. With our Philips hue ‘white and colour ambiance’ range, play with 16 million different colours including warm and cool white light and create the perfect ambiance for any mood. Discover Philips hue - the latest in smart home lighting.

4.7 out of 5 stars
4.7 out of 5
1,079 global ratings
How are ratings calculated?
To calculate the overall star rating and percentage breakdown by star, we don’t use a simple average. Instead, our system considers things like how recent a review is and if the reviewer bought the item on Amazon. It also analyses reviews to verify trustworthiness.

Klashed
4.0 out of 5 stars Vibrant
Reviewed in the United Kingdom on 9 May 2019
Verified Purchase
I've been using bulbs from Hive for over two years and they're great, but the lighting choices are limited. I bought these lights with a Hue Bridge and set up was very easy.

First thing to note is that while they are white, the backs are black. This is hidden pretty well in the pictures.

The main difference for me was the vibrancy compared to the Hive coloured bulbs. The Hue Sync application is great too, being able to sync them with games/videos/music is a really neat feature. Note that you can't hook these up directly to your TV, the Sync application runs on a PC, so that's a definite negative.

I have far too many Hive bulbs to start again, but in future I'll definitely be buying Hue instead. Overall it's four stars because they're a little bit too pricey, and no direct sync to a TV.
Read more

Ben
5.0 out of 5 stars Super!
Reviewed in the United Kingdom on 14 October 2018
Verified Purchase
Really happy with this purchase (I’ve actually gone ahead and ordered another pack!).

Super bright and small, the usual simplicity - plug it in, open the app and find the devices. Currently have 1 either side of the TV and adds a really pleasant ambience. I have ordered another pack so I can have a central light also (I’ll find somewhere else to put the 4th!).

Good build quality that I’ve come to expect from Philips Hue. Not the cheapest product, but certainly one of the brightest I have seen... I can think of multiple uses,
but certainly works well as a TV backlight.
Read more
19 people found this helpful
Report abuse

Christo Mastoroudes
5.0 out of 5 stars Primarily for use on a gaming PC.
Reviewed in the United Kingdom on 11 October 2019
Verified Purchase
Bought 6 light bars, three for the home theatre pc and three for my main gaming PC. Initially I had almost returned the whole order but later decided to keep them. The main reason was the price, I got the light bars on a sale and still they were very expensive, the light bars with hub cost almost £300.

The Software:
You have to install the app on your mobile and also an app on your PC. Confusingly you have to use both, the PC app controlling mostly sync related lighting and the mobile app for setup, light positioning, timers etc. Both apps work well, but there is some room for improvement. The good thing is that Philips hue have a large client base, so the software should continue to improve and mature.

The latency:
In my setup there is almost no discernable lag between what is happening on my monitor and when the lights react, I would estimate around 20-50ms. I am connected directly to my router via a lan cable and I am around 5m away from the hue hub. This can very quickly turn in to a different story if you are on slow wifi or worst yet, try to wirelessly cast/mirror your laptop display onto a TV. I think most complaints about latency online is with ppl doing exactly that. I did notice an option in the software to mitigate the issue, but did not need to use it. There is no substitute for a hard wired connection.

It works like this. The app on your PC analyses the screen space and calculates average light values based on your lighting setup. This gets sent to the hue hub via your local network. The hue hub then sends the signals to the lights via the Bixby wireless protocol.

The light bars:
These are rather small but can produce a good amount of light. Rather than the amount of light, it is the quality of the light that surprised me. The warm and cool white light is amazing and it is obvious that some attention was given to colour reproduction. They must have RGB and two different kinds of white light LEDs inside. The diffuser is excellent quality too, I am not able to discern any individual spots of light inside the bar. There is nothing quite like starting up DOOM and having the whole room go a deep red colour! Quite nice indeed.

There is one annoying aspect of the light bars, at full brightness they emit an electric buzzing sound. The buzzing sound is reduced in line with the brightness setting. This should not be an issue when seated a few meters from a TV or if there is any other noise in the room, but when sat at a desk close to the lights it is noticeable. To mitigate the issue I placed the light bars as far away from my seating position as possible and have them set to around 30% brightness when doing work or just browsing the net in a quiet room. If you are using headphones or have any other noise in the room then you can't hear any buzzing even at 100% brightness. To give you an idea, it is reminiscent of some older and cheaper type monitors that emit a buzzing sound because of PWM dimming.

The hub:
Nothing much to say here, find a decent spot for it and switch it on, have not had any issues with it.

PC performance:
There is overhead associated with analysing the screen space, calculating average colours and sending the data to the hue hub. I have a top spec PC with a 2080ti GPU, and using a gaming benchmark I noticed about a 5-8% performance decrease with hue sync enabled. For me this is not an issue, but it could be an issue on weaker hardware. Hue sync can be disabled or enabled on a game to game basis in the software as profiles.

The competition:
Asus Aura Halo works by adding LED strips to the back of the monitor. I like Asus but they have a way of not updating their software, and when they do it will usually only work on the newer hardware. I don't trust them to improve the software or even fix it if potentially a windows update breaks it. The RGB light will be harsh with no diffuser or dedicated white leds.

NZXT Hue 2 V2 Ambient, they seem a bit more invested in the tech with a v2 released recently, but again this is all controlled with their CAM software which has a terrible reputation. The same RGB strips are used with no diffuser or dedicated white lights. Since these light strips are addressable they offer a higher resolution as only some leds can be triggered to onscreen events, but this to me just seem to make them even harsher on the eye.

In both cases the competitions software and features are lacking as compared to the Philips implementation. The lighting is also harsh, which is why I decided to go with Philips hue sync. With philips you can also add lighting at a later point and you are free to place the lights where you want.

The lighting should add to the ambience of a gaming session, not be a distraction.

UPDATE: Some months have passed since my last review and thought this detailed review could do with an update. In my living room setup I have added another light bar to my rear top left on a bookcase behind a nice Alien statue, and a E27 colour ambiance bulb to my tall lamp on the rear right. This is now my primary way of lighting the living room. I also stuck a Hue dimmer switch close to the couch so we can control brightness easily. Gaming and movies is awesome, although Netflix still does not work with Hue play. Works best with movies that have lots of colour and action.

My gaming setup also got another Hue play bar for a total of 4, and a dimmer switch. I missed some light under my shelf and that has now been remedied. My lights are set to switch on via a timer on weekdays to help me get up, and they also switch of automatically when I leave the house.

It is not a cheap echo system, but I would miss the ambient light during gaming if you took it away right now. During the past few months there has been one update to the sync app, validating my theory that the ecosystem is larger than the competition, and Philips is actively developing for it.
Read more

12 people found this helpful
Report abuse
See all reviews
Get FREE delivery with Amazon Prime
Prime members enjoy FREE Delivery and exclusive access to movies, TV shows, music, Kindle e-books, Twitch Prime, and more.
> Get Started
Back to top
Get to Know Us
Make Money with Us
Let Us Help You
And don't forget:
© 1996-2020, Amazon.com, Inc. or its affiliates