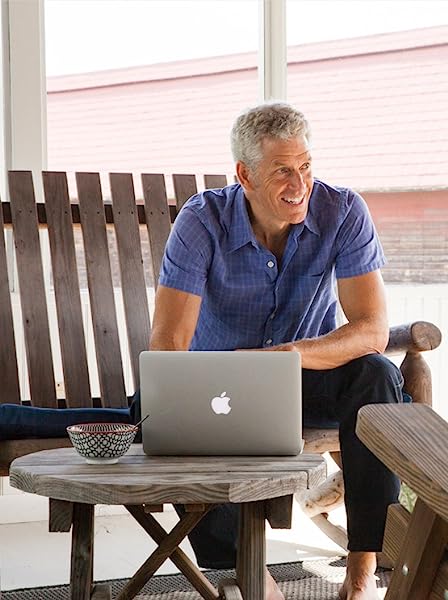 by Rip Esselstyn (Author)
4.6 out of 5 stars 1,060 ratings
See all formats and editions
Sorry, there was a problem loading this page. Try again.

"My Beef with Meat is one of the most enlightening and practical books you'll ever read. Rip Esselstyn tackles every key health issue and provides exactly the information readers need to achieve the best of health and peak performance. As one of the most respected leaders in the movement for better health, Rip Esselstyn tells it exactly as it is." --Neal D. Barnard, MD, New York Times bestselling author of The 21-Day Weight Loss Kickstart and Adjunct Associate Professor of Medicine at George Washington University School of Medicine ---

"Debunking the myths about animal products and distilling the facts about healthful eating, this book should be required reading for everyone who eats. In other words, EVERYONE!" --Colleen Patrick-Goudreau, bestselling author and creator of The 30-Day Vegan Challenge---

"In his new book, Rip Esselstyn continues his trailblazing efforts to create a healthy plant-strong nation by extinguishing many of the myths and concerns about a whole foods plant-based diet." --Jeff Novick, MS, RD---

"My Beef with Meat" makes it clear why a plant-based diet is the best diet on earth, and why an animal-based diet is so unhealthy. This fascinating and fun book is a must for anyone interested in health and nutrition!" --Brian Wendel, Executive Producer of Forks Over Knives---

"Once again Rip cuts the bull and serves up the straight facts, along with delicious recipes, for health and performance. I wish I had this book when I decided to go plant strong!" --Scott Jurek, world renown ultramarathon champion and bestselling author of Eat and Run---

"Rip Esselstyn is a living, breathing example of what a plant-based diet can do for you. In his new book, he lays out exactly why you get so strong and healthy by avoiding meat and opting for food that's grown in the ground or on trees. Eat like he does and be transformed!"--Kathy Freston, bestselling author of The Lean ---

"This book is revolutionary! It dispels all the nutrition myths that cause sickness and confusion in our society. Rip is straight-forward, succinct and caring with his delivery of information that will save your life. Arm yourself with knowledge and delicious plant-strong recipes!" --Lindsay S. Nixon, author of The Happy Herbivore Cookbook series---

Born in upstate New York, Rip Esselstyn grew up in Cleveland, Ohio, and studied speech communciations at the University of Texas, Austin, where he was an All-American swimmer. After spending 10 years as a professional triathlete, Rip joined the Austin fire department in 1997. He now travels year-round lecturing and giving seminars on the Engine 2 lifestyle. He is the author of the New York Times bestsellers The Engine 2 Diet and Plant-Strong. Visit his website at www.engine2diet.com.
Tell the Publisher!
I’d like to read this book on Kindle

4.6 out of 5 stars
4.6 out of 5
1,060 global ratings
How are ratings calculated?
To calculate the overall star rating and percentage breakdown by star, we don’t use a simple average. Instead, our system considers things like how recent a review is and if the reviewer bought the item on Amazon. It also analyses reviews to verify trustworthiness.

Dannie
5.0 out of 5 stars Get educated. Buy the Esselstyns books and look them up!!
Reviewed in the United Kingdom on 17 June 2020
Verified Purchase
This is a reprint of My Beef With Meat. I believe it does have a few additions, but it is basically the same book. If you already have that book be aware of that. I didn't, and I am delighted with this book. The Esselstyn's are a fantastic family. Rip Esselstyn who wrote this book is the creator of the Engine 2 diet of which he also has a book and cookbook. He created this diet to rescue the health of his firecrew. His father Dr Caldwell Esselstyn is an absolute pioneer. You can see them both in Forks Over Knives documentary on NetFlix and Dr Esselstyn in What The Health Documentary. Dr Esselstyn has dedicated his life to reversing and preventing heart disease with a plant based diet. His book How to Prevent and Reverse Heart Disease and the corresponding cook book of the same name are fantastic. His wife Jane Esselstyn has a YouTube cooking Channel which is fantastic to follow she does some of the recipes from this book and the prevent heart disease book. If you are interested in Whole Plant Based for Health Dr Greger How Not To Die book and cook book are fantastic, he also appeared in said documentaries, as well as of course Dr Neal Bernard. Look up his talks on dairy on YouTube and his book the Cheese Trap. These doctors are leading plant based pioneers. All of these books are fantastic resources.
Read more
2 people found this helpful
Report abuse

user of shadows
1.0 out of 5 stars My beef with meat??
Reviewed in the United Kingdom on 31 December 2016
Verified Purchase
Do not bother buying if you have another of his books called my beef with meat,it's the same book with a different title
Read more
16 people found this helpful
Report abuse

Georgia. Jane.
4.0 out of 5 stars New vegan .
Reviewed in the United Kingdom on 8 February 2016
Verified Purchase
The main benefits of this book for me is the information chapters which precede the recipe chapters. It is easy to understand and to read . The recipes are a good base to start although they need to be adapted for me because I live on my own and I am gluten-intolerant. There are quite Lot of extra ingredients to buy , all of which are available on-line but once you have them they last for some time so don't work out expensive in the long term .
Read more
9 people found this helpful
Report abuse

Stevens-Edwards
3.0 out of 5 stars Not enough photos, but good recipes
Reviewed in the United Kingdom on 27 March 2017
Verified Purchase
I only bother with cookery books with pictures. This one had a few, but in two sections, not for every page. I still recommend it though, it's very upbeat and American and quite a few of the recipes are Mexican or tex mex which I love, but gets a bit repetitive as so many vegan books are the same. I liked the author's ethos and was a bit shocked by the "beef council's" petty antics giving out free briskests to fire stations on the day of the book launch!
Read more
4 people found this helpful
Report abuse

Michael Lingard
5.0 out of 5 stars When can we have a Kindle version?
Reviewed in the United Kingdom on 5 October 2016
Verified Purchase
A really excellent presentation of a difficult , confusing subject for most people. I'd love to see a Kindle version of it for my travels.
Read more
8 people found this helpful
Report abuse
See all reviews
Back to top
Get to Know Us
Make Money with Us
Let Us Help You
And don't forget:
© 1996-2021, Amazon.com, Inc. or its affiliates