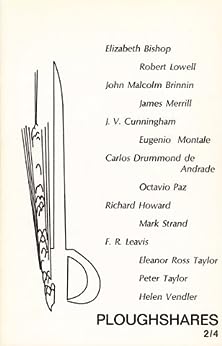 ART
"The Awning at the Ritz," by Ralph Hamilton
Read more
Previous page
Next page

Christy Mahon
5.0 out of 5 stars " one of his greatest poems, in a version Lowell rewrote for the ...
Reviewed in the United States on 1 September 2014
Verified Purchase
Long out of print, this issue marked a turning point for Ploughshares from an essentially local to a national and international journal. Frank Bidart had the typeface and cover completely redesigned, and included new work by Robert Lowell ("In the Ward," one of his greatest poems, in a version Lowell rewrote for the worse when he included it in a book) and Elizabeth Bishop, with essays on Lowell and Bishop, Ginsberg, Montale, and George Herbert by David Kalstone, Helen Vendler, and FR Leavis. Major new poems by Robert Pinsky and Lloyd Schwartz (assistant editors), Octavio Paz, James Merrill, David Ferry, Richard Howard, JV Cunningham, Alice Mattison, Alan Williamson, James McMichael, Mark Strand, Eleanor Ross Taylor and Peter Taylor, and a stunning collage series, "The Awning at the Ritz," by Ralph Hamilton. It's great that his collector's item is now available on Kindle. I love having it.
Read more
Report abuse
See all reviews
Back to top
Get to Know Us
Make Money with Us
Let Us Help You
And don't forget:
© 1996-2022, Amazon.com, Inc. or its affiliates