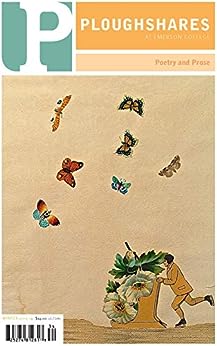 Dedicated to Seamus Heaney (1939-2013), a former guest editor, this issue of Ploughshares features a short remembrance of the Irish master by the poet Joyce Peseroff. The prose has a particularly international flavor, from Andrew Foster Altschul's story "Embarazada," about a fraught relationship between a Peruvian waitress and an American tourist, to "498," about a soldier caught in the brutality of the Spanish Civil War. Robert Anthony Seigel's Plan B essay describes his years as a tour guide for Japanese visitors to New York, and Jennifer Acker celebrates the work of the Australian writer Shirley Hazzard.

The Winter issue also features poetry by Kevin Young, Linda Bamber, Michael Mlekoday, and Carl Dennis, among many others; a newly discovered poem by Alan Dugan; and the winners of the Emerging Writer's Contest.

There are 0 customer reviews and 1 customer rating.
Back to top
Get to Know Us
Make Money with Us
Let Us Help You
And don't forget:
© 1996-2022, Amazon.com, Inc. or its affiliates