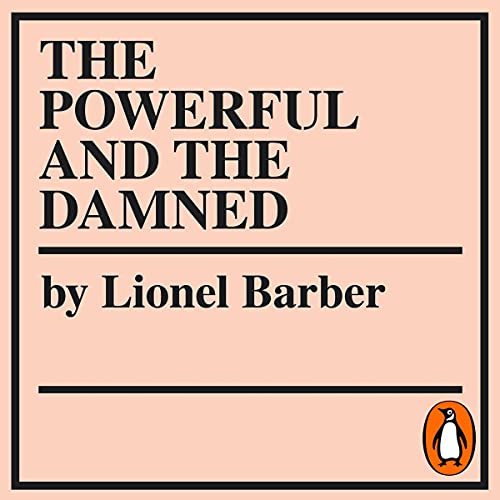 The Powerful and the Damned: Private Diaries in Turbulent Times

Lionel Barber (Author, Narrator), Penguin Audio (Publisher)
4.3 out of 5 stars 245 ratings
See all formats and editions
Sorry, there was a problem loading this page. Try again.

'As FT editor, I was a privileged interlocutor to people in power around the world, each offering unique insights into high-level decision-making and political calculation, often in moments of crisis. These diaries offer snapshots of leadership in an age of upheaval....'

Lionel Barber was editor of the Financial Times for the tech boom, the global financial crisis, the rise of China, Brexit and mainstream media's fight for survival in the age of fake news.

In this unparalleled, no-holds-barred diary of life behind the headlines, he reveals the private meetings and exchanges with political leaders on the eve of referendums, the conversations with billionaire bankers facing economic meltdown, exchanges with Silicon Valley tech gurus and pleas from foreign emissaries desperate for inside knowledge, all against the backdrop of a wildly shifting media landscape.

The result is a fascinating - and at times scathing - portrait of power in our modern age; who has it, what it takes and what drives the men and women with the world at their feet. Featuring close encounters with Trump, Cameron, Blair, Putin, Merkel and Mohammed Bin Salman and many more, this is a rare portrait of the people who continue to shape our world and who quite literally make the news.

Switch between reading the Kindle book & listening to the Audible narration with Whispersync for Voice.
Get the Audible audiobook for the reduced price of $39.50 after you buy the Kindle book.
Last chance - Ends Thursday!
Learn more about membership
By completing your purchase, you agree to Audible’s Conditions Of Use and Privacy Notice.
Sold and delivered by Audible, an Amazon company

4.3 out of 5 stars
4.3 out of 5
245 global ratings
How are ratings calculated?
To calculate the overall star rating and percentage breakdown by star, we don’t use a simple average. Instead, our system considers things like how recent a review is and if the reviewer bought the item on Amazon. It also analyses reviews to verify trustworthiness.

fashion_magpie
3.0 out of 5 stars That the cover carries an endorsement from Tony Blair says it all.
Reviewed in the United Kingdom on 8 November 2020
Verified Purchase
I was excited to read this book having read an extract published in the FT. What could Mr Barber tell us from his meeting the great and good (and not so good)? Not a tremendous amount it seems. After a tedious chapter or so covering his climbing the greasy pole, he does not really offer much depth of insight or reflection on those he has interviewed. There are some pinpoints of interest (e.g. we / I failed to see the EU referendum result) but Mr Barber fails to elaborate. Unsettling is his account of lunching with Jamal Kashoggi followed chronologically with an encounter with MBS - his lack of comment suggests a lack of backbone. I haven't gotten to the bottom of whether or not the endorsement on the cover page by Tony Blair is meant to be ironic or not. The powerful and the damned, indeed. Worth a read but left feeling like Mr Barber is a little self-consumed and could have offered the reader an awful lot more.
Read more
23 people found this helpful
Report abuse

paul manolache
1.0 out of 5 stars Dreadful
Reviewed in the United Kingdom on 19 December 2020
Verified Purchase
One of the worst, if not the worst, books I ever read. The writing style is at best mediocre, which is quite surprising given that the author is an acclaimed journalist. Nevertheless, what makes it appalling is the content. It narrates 15 years of dinner parties and famous people that the author met without any insight, or at the very least, meaningful information being conveyed to the reader. The fact that the author was in charge of the Financial Times at the time of the Financial Crisis or Brexit seems to have escaped him completely, focusing on the latest restaurants around the world where the crème de la crème meets to plan how to exploit their power. Avoid! You'll waste time that you'll never get back.
Read more
11 people found this helpful
Report abuse

Leopold
4.0 out of 5 stars Fascinating but flawed
Reviewed in the United Kingdom on 5 December 2020
Verified Purchase
Fascinating because Lionel Barber, as editor of the FT, had access to and interviewed the world’s most powerful men and women during his fourteen-year tenure of the post.

Presidents, Prime Ministers, oligarchs, bankers, industrialists, authors and politicians of every stripe passed through the FT office or were interviewed in their own palaces and offices. Everybody who was Anybody was interviewed By Lionel Barber,
So the reader has a ringside seat at these interviews together with Barber’ take on the interviewee.

Flawed, because Barber from his FT ivory tower too often missed the big picture.As a committed Europhile he was unable to grasp that that the British electorate might wish to regain control of their laws and their destiny rather have those decided for them by EU bureaucrats that they had never elected. So the result of the 2016 referendum was to him shocking and inexplicable.

Similarly Donald Trump’s victory in the American election later that same year came as just great a shock, as just as great a surprise. I cannot blame him for that, as the circles in which he moved, professionally and personally were wholly insulated from what may loosely be termed “the real world”.

The background to his diaries is his natural concern over the ownership and its editorial independence. Pearson, its British owners sold the title to the Japanese publishing conglomerate Nikkei and Barber’s account of his establishing an eventually successful relationship with Nikkei and a guarantee of editorial independence brings the story to a successful end, at least as far as that Barber is concerned

This is the ideal potted guide to world personalities through the eyes of the FT editor.- who rates himself quite highly - but he also has the good grace to admit his mistakes.

Londoner
2.0 out of 5 stars Couldn’t warm to this
Reviewed in the United Kingdom on 30 August 2021
Verified Purchase
I usually love diaries from journalists, and as this book covers such a momentous period of recent history I was expecting a cracking read.

The author opens by saying he didn’t actually keep a diary at the time, and so has assembled one from notes. So you get diary entries that leave you wondering how raw and honest the author is being.

Each entry is also appended by a brief italicised bit of narrative about what happened subsequently. Some of these are insightful but often it comes across a bit like a kind of ‘I was right’ justification.

To achieve what this author has is impressive. Clearly a talented journalist and editor, who turned the FT around. But I felt that he wears this a bit thickly at times - there’s sometimes a bit of an ‘I know I’m good’ air about it.

As a result of this and the inauthentic diary format, I found myself skipping through it rather than getting truly absorbed in it. It had a chilly distance about it that the best diaries don’t. An interesting read, but not a gripping one.
Read more
2 people found this helpful
Report abuse

Mr. M. Grossfeld
5.0 out of 5 stars Must-read page turner for fans of serious journalism
Reviewed in the United Kingdom on 8 November 2020
Verified Purchase
I am devouring this insightful, frank and always entertaining review of 15 tumultuous years of insider reporting on the great and the good. Full disclosure: I am a big fan and faithful reader of the FT, so I may be biased. But I highly recommend this book as live history and excellent writing.
Read more
5 people found this helpful
Report abuse
See all reviews