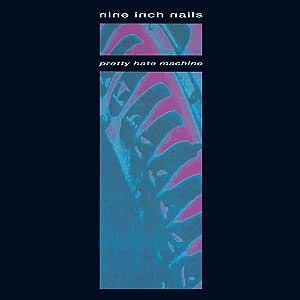 Remastered edition of the 1989 debut album from Trent Reznor and Co. featuring the original tracklisting and artwork. As a young musician in Cleveland, Ohio, Trent Reznor took a job at a local recording studio and employed unused studio time to develop his own material. The nascent album was later recorded with his favorite producers including Flood/Mark Ellis (U2, Depeche Mode, PJ Harvey), John Fryer (Cocteau Twins, This Mortal Coil), Adrian Sherwood (Ministry, Cabaret Voltaire) and Keith LeBlanc (Tackhead). The result was Pretty Hate Machine. All songs were written, arranged, programmed and performed by Reznor.

4.7 out of 5 stars
4.7 out of 5
1,372 global ratings
How are ratings calculated?
To calculate the overall star rating and percentage breakdown by star, we don’t use a simple average. Instead, our system considers things like how recent a review is and if the reviewer bought the item on Amazon. It also analyses reviews to verify trustworthiness.

jamie
5.0 out of 5 stars Excellent Remaster
Reviewed in Australia on 3 November 2018
Verified Purchase
Great reissie from when it all began for NIN
Read more
Helpful
Report abuse
See all reviews

lollipopsandcrisps
2.0 out of 5 stars Definitely not the version to get!
Reviewed in the United Kingdom on 20 April 2020
Verified Purchase
BEWARE, this is the 2011 reissue and NOT the superb 2010 remaster. Avoid at all costs!
The two star rating is purely based on the issue around sound quality, the music itself is excellent of course. I perhaps should stress that these songs don't actually sound bad, its just that (for once) the remaster is SO good it renders the original version completely redundant, and why have an inferior version?
Read more
3 people found this helpful
Report abuse

RexBo
5.0 out of 5 stars A seminal album gets a new lease on life!
Reviewed in the United Kingdom on 25 November 2011
Verified Purchase
I can still remember when I first heard this album. Nine Inch Nails was just starting, and they were about to explode onto the music scene. Its dark, gritty sound may be too much for some people sometimes, and the video clips exude a dark doomsday vibe that was so prevalent in the first part of NIN's career. I loved the original with all of its distortion and pumped up mixes, this album could bite! Since the grittiness that appealed to me is such a vital part of the album's mood I wasn't sure if remastering would actually make sense; after all, the whole point of remastering is to clean up, polish and remove 'unwanted' noises and artifacts. Wouldn't this destroy the album's very essence? Well, leave it up to Trent Reznor & all. to bypass this trap and come up with the same nasty, dark, gritty mood as the original, only better! The tracks are more vibrant and dynamic, and it feels like the album tracks fit better together now. In short, this is a must have for all NIN fans, even if you already own the original, and a pretty great album for anyone else (that is not afraid of the dark or creepy noises...).
Read more
2 people found this helpful
Report abuse

AJ
5.0 out of 5 stars Where it all began....again
Reviewed in the United Kingdom on 28 May 2014
Verified Purchase
A remastered version of NIN's ground breaking first album, I picked this up in preparation for their recent European Tour to reintegrate myself with these classic slabs of dark industrial pop.

The remastered sound quality is magnificent and gives the 80's synths and drum machines an extra sharpness missing from the original recordings, the guitars are crisp and the the vocals crystal clear. Extra additional Queen cover included in the release also.

A great remaster of a genuinely amazing and influential album.
Read more
One person found this helpful
Report abuse

SilverWolf
5.0 out of 5 stars As it's meant to be..
Reviewed in the United Kingdom on 6 September 2011
Verified Purchase
The sound quality of the remaster of this album is substantially improved over the original CD. The synths and samples have far more atmosphere and depth, the bass and drums have much greater weight, and the soundstage is generally more pronounced. Some remasters are just louder and a bit cleaner than the original (The Cult's Love for example)but this isn't the case here. The original was very quiet and this isn't, but great care and attention is very apparent here. All in all it has a more analogue, vinyl feel to it which takes away the unnecessary harshness of the original.
If you have a love of this album, I would strongly recommend the re-issue. There isn't a second disc of extras, but the qulity is so good I don't think it really matters. Essential purchase, thanks Trent.
Read more
3 people found this helpful
Report abuse
See all reviews
Back to top
Get to Know Us
Make Money with Us
Let Us Help You
And don't forget:
© 1996-2021, Amazon.com, Inc. or its affiliates