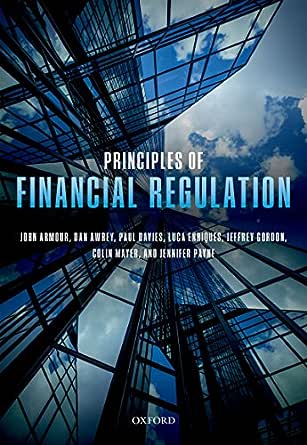 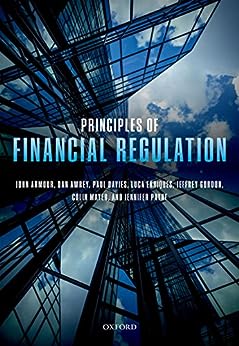 The book is a well-written composition that covers the major issues of financial regulation and provides a comprehensive picture of this complicated field in a clear and understandable manner. ... The book is a "must" for students in courses on financial regulation. However, it may be of use for a wider range of readers including academics (in law, business, public policy and economics), practitioners in the field and regulators. The book's thorough and profound analysis will unquestionably serve as an important tool in meeting the challenges of continued exploration of financial regulation. ― Professor Ruth Plato-Shinar, Journal of International Banking Law and Regulation --This text refers to the hardcover edition.

John Armour is Hogan Lovells Professor of Law and Finance at the University of Oxford and a Fellow of the European Corporate Governance Institute. He has held visiting posts at various institutions including the University of Auckland, the University of Bologna, the University of Chicago, Columbia Law School, the University of Frankfurt, the Max Planck Institute for Comparative Private Law, Hamburg, the University of Pennsylvania Law School, and the University of Western Ontario. His research interests lie in the integration of legal and economic analysis, with particular emphasis on the impact on the real economy of changes in company law and financial regulation. He has been involved in policy-related projects commissioned by the UK's Department of Trade and Industry, Financial Services Authority, and Insolvency Service, the Commonwealth Secretariat, and the World Bank. He currently serves as a member of the European Commission's Informal Company Law Expert Group. Dan Awrey is an Associate Professor of Law and Finance and Academic Director of the MSc in Law and Finance programme at the University of Oxford. His teaching and research interests reside in the area of financial regulation and, more specifically, the regulation of banks, investment funds, derivatives markets, and financial market infrastructure. Paul Davies is a Senior Research Fellow at Harris Manchester College, Oxford, UK. He was Allen & Overy Profesor of Corporate Law, University of Oxford, from 2009-2014; Cassel Professor of Commercial Law at the London School of Economics and Political Science, 1998-2009; and, before that, Professor of the Law of the Enterprise, University of Oxford.He is a Fellow of the British Academy, an honorary Queen's Counsel and an honorary Bencher of Gray's Inn. Luca Enriques is the Allen & Overy Professor of Corporate Law at the University of Oxford. His scholarship explores corporate law, corporate governance, securities regulation, and financial regulation. Among his many publications are numerous articles in major European and US reviews and journals, as well as several books. Enriques has held visiting appointments at the University of Cambridge, the Interdisciplinary Center Hertzliya, Harvard Law School, and the Instituto de Impresa (Madrid). He previously taught at LUISS University (Rome) and the University of Bologna and was a Commissioner at the Italian S.E.C. (Consob) between 2007 and 2012. Jeffrey N. Gordon is the Richard Paul Richman Professor of Law at Columbia Law School and co-director of the Richman Center for Business, Law and Public Policy and the Millstein Center for Global Markets and Corporate Ownership. He is also a visiting professor at Oxford University and a Fellow of the European Corporate Governance Institute. He has written extensively on corporate governance and mergers and acquisitions over his academic career but after events in fall 2008 began teaching and writing on financial regulation. Before becoming a law professor, he worked at the US Treasury and a private law firm in New York City. Colin Mayer is the Peter Moores Professor of Management Studies at the Saïd Business School at the University of Oxford. He is a Professorial Fellow of Wadham College, Oxford, and an Honorary Fellow of Oriel College, Oxford and St Anne's College, Oxford. He is a Fellow of the British Academy, the European Corporate Governance Institute, and the Royal Society of Arts. He is a member of the UK Competition Appeal Tribunal and the International Advisory Board of the Securities and Exchange Board of India. Colin Mayer was the first professor at the Saïd Business School in 1994, the Peter Moores Dean of the Business School between 2006 and 2011, and the first Director of the Oxford Financial Research Centre between 1998 and 2005. He was the chairman of Oxera Ltd. between 1986 and 2010 and a member of the UK Government Natural Capital Committee between 2012 and 2015. He is a director of Aurora Energy Research Ltd. Jennifer Payne is Professor of Corporate Finance Law at the University of Oxford where she teaches courses on company law, corporate finance law, corporate insolvency law, and principles of financial regulation. She has held visiting positions at leading international institutions including the University of Auckland, NUS University of Singapore, the University of Melbourne, and the University of British Columbia. She has written widely in the field of corporate law in leading journals and edited collections, and is the author of several books, including The Oxford Handbook of Financial Regulation (OUP 2015, with Niamh Moloney and Eilis Ferran). --This text refers to the hardcover edition.
Read more

4.6 out of 5 stars
4.6 out of 5
26 global ratings
How are ratings calculated?
To calculate the overall star rating and percentage breakdown by star, we don’t use a simple average. Instead, our system considers things like how recent a review is and if the reviewer bought the item on Amazon. It also analyses reviews to verify trustworthiness.

ElenaF
5.0 out of 5 stars A very good and easy to understand introduction to financial regulation
Reviewed in the United Kingdom on 16 February 2018
Verified Purchase
Excellent book - deep analysis made easy to read and comprehend. I would definitely recommend it to students and practitioners wishing to get a general background on various aspects of financial regulation.
Read more
Report abuse

ShaneL
5.0 out of 5 stars Five Stars
Reviewed in the United Kingdom on 15 March 2017
Verified Purchase
Everything you could ask for in a one book compliance manual
Read more
3 people found this helpful
Report abuse

DjPat
4.0 out of 5 stars Really Good.
Reviewed in the United Kingdom on 11 September 2018
Verified Purchase
Really Good.
Read more
One person found this helpful
Report abuse
See all reviews
Back to top
Get to Know Us
Make Money with Us
Let Us Help You
And don't forget:
© 1996-2021, Amazon.com, Inc. or its affiliates