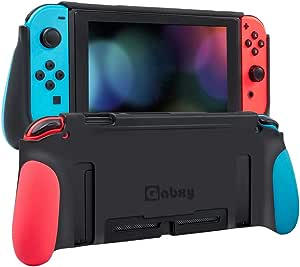 The Ultimate solution for the handhold mode of Switch!
The handheld mode is always our favorite, but we found because of its size and flat back, it is difficult to hold the console and play the games for a long period of time making our hands too tired from holding the SWITCH. Which got us thinking, why not make a case, not only to protect the SWITCH but also providing two comfortable grips on the SWITCH.
So the Case was born to let game players to have the ability to play the games for hours without the feeling of fatigue. We have worked to create the absolute best Protective Cover Case Compatible with Switch.

- Note:You can't take out Joy-Con with this cover installed and switch stand are not supported when using the case.

If you have any questions, please contact us without hesitation, SORZEEN professional support team is standing by to assist you!

4.4 out of 5 stars
4.4 out of 5
1,379 global ratings
How are ratings calculated?
To calculate the overall star rating and percentage breakdown by star, we don’t use a simple average. Instead, our system considers things like how recent a review is and if the reviewer bought the item on Amazon. It also analyses reviews to verify trustworthiness.

Eddie
5.0 out of 5 stars Close to Perfection
Reviewed in the United States on 9 May 2019
Colour: Red and BlueVerified Purchase
The Sorzeen Protective Case for Nintendo Switch is the improvement I wanted out of the Skull & Co. GripCase, making the Switch's handheld mode a great experience.

First off, there’s nothing covering the shoulder buttons, as it should be. Despite the fact that the Joy-Con triggers are pretty sensitive to pressure, the thought of adding a case that makes it harder to press them after getting used to it for a year is infuriating. Since the Sorzeen case protects almost every other inch of the Switch (with the added screen protector), this is a compromise I'm more than happy to take.

The grips themselves protrude slightly outward instead of extending straight out the back like many other cases. In terms of ergonomics, this case is only second to the Satisfye grip, but unlike Satisfye, the Sorzeen case can dock.

Contrary to the reviews you may have seen on the Skull & Co. GripCase, there’s no question on whether the Sorzeen Protective Case docks or not. It definitely does, but be advised that, like the Skull & Co. case, the two USB ports on the side of the dock will be blocked when docking with the Sorzeen case.

Instead of textured plastic on the grips, Sorzeen opted for silicone, and it works nicely. This case won’t tug at your skin and it won't slip through your fingers even after extended play times.

This is a 5 star product for me, but depending on what you need, you may have some caveats.

The kickstand is unavailable while the case is on the Switch. There's rectangle shaped holes for what I believe to be ventilation purposes, but they're cut out in a way that does not allow using the kickstand. It'll be annoying if you have a habit of switching out micro SD cards.

Also, the Joy-Cons cannot be detached from the Switch. This one is an even bigger head scratcher because the top of the case barely covers a small portion of the Joy-Cons, but just enough to render them undetachable. Why can't that portion be cut out, especially when the case already exposes the detaching button on the back of the controllers? Under normal circumstances, this issue is irritating enough to knock this product down a star, but the only reason I'm not doing that is because I have a Pro Controller to use while the Switch is in docked mode, so the issue is moot for me.

Provided that you don't care about the kickstand and have another controller to use while in docked mode, this case is the one to but. The gray and red/blue options is a great start, but hopefully we'll see more color variations if this product catches on.

A. Boone
5.0 out of 5 stars Comfortable
Reviewed in the United States on 4 June 2019
Colour: GrayVerified Purchase
It isn't a big deal not to have the comfort grip on a Switch, but it is a nice treat. This case/grip is easy to pop on and take off; it doesn't block the any buttons or obscure the screen in anyway. It does block the kickstand in the back, but if one is going to use the kickstand the case/grip needs to be removed anyway. I do not use this with the dock so I cannot honestly say if it fits in the dock with the case on, but I doubt that it will. Good addition for the Switch for someone use to using PS4/XBox controllers.
Read more
36 people found this helpful
Report abuse

Marshall R. Houle
5.0 out of 5 stars Feels great, cant find a case
Reviewed in the United States on 19 June 2019
Colour: GrayVerified Purchase
This grip feels great. It's made of good material and is very protective. The only problem I'm having is finding a carrying case that it will fit in.
Read more
38 people found this helpful
Report abuse

Jay William Kay-Bull
5.0 out of 5 stars Perfect
Reviewed in the United States on 30 May 2019
Colour: GrayVerified Purchase
This is EXACTLY as I'd hoped and just what I was looking for. Originally bought a different case but wasn't satisfied...grips weren't easy enough to grip and didn't dock. This one docks easily (NOT too tight) and the grips make the switch much easier to use. I think the ones that think the dock is too tight are probably sliding it in backwards or something?
Read more
36 people found this helpful
Report abuse

Stacey Carmichael
5.0 out of 5 stars Perfect. Don't buy any other brand.
Reviewed in the United States on 13 June 2019
Colour: GrayVerified Purchase
It's thick enough for protection, yet it doesn't add bulk. Most importantly, it makes holding the Switch so much more comfortable. It's cheaper than the competition, but it seems like it's better than the competition: it comes in a nice box, feels like good quality, and it doesn't cover up any buttons--not even the shoulder buttons.
Read more
35 people found this helpful
Report abuse
See all reviews
Back to top
Get to Know Us
Make Money with Us
Let Us Help You
And don't forget:
© 1996-2021, Amazon.com, Inc. or its affiliates