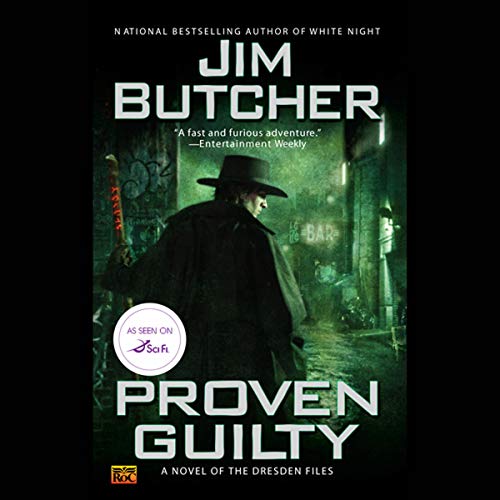 Jim Butcher (Author), James Marsters (Narrator), Penguin Audio (Publisher) & 0 more
4.8 out of 5 stars 2,448 ratings
See all formats and editions
Sorry, there was a problem loading this page. Try again.
The White Council of Wizards has drafted Harry Dresden as a Warden and assigned him to look into rumors of black magic in Chicago. Malevolent entities that feed on fear are loose in the Windy City, but it's all in a day's work for a wizard, his faithful dog, and a talking skull named Bob.
Read more
©2007 Jim Butcher (P)2009 Penguin
Previous page
Next page

4.8 out of 5 stars
4.8 out of 5
2,448 global ratings
How are ratings calculated?
To calculate the overall star rating and percentage breakdown by star, we don’t use a simple average. Instead, our system considers things like how recent a review is and if the reviewer bought the item on Amazon. It also analyses reviews to verify trustworthiness.

Kindle Customer
5.0 out of 5 stars Keeps getting better
Reviewed in Australia on 13 March 2017
Verified Purchase
I don't know how he does it😀 Keeps imtrigued, interested and away from other stuff I need to be doing. Got to go The White Knight is waiting for me
Read more
Helpful
Report abuse

Linda Vunk
5.0 out of 5 stars Spellbinding
Reviewed in Australia on 13 January 2016
Verified Purchase
Had me glued to my kindle from beginning to end...
Read more
Helpful
Report abuse

Rev Peter
5.0 out of 5 stars Brilliant
Reviewed in Australia on 25 October 2017
A great read. Recommended to me by a dear friend. Now I know why. Gripping from start to finish. P
Read more
Helpful
Report abuse

Lauren VS
5.0 out of 5 stars The best yet!
Reviewed in Australia on 24 August 2020
Verified Purchase
I think Proven Guilty is the best Dresden Files book so far! Absolutely awesome book! Jim Butcher's writing is top notch in this one, great mystery, humour and storytelling!
Read more
Helpful
Report abuse
See all reviews

Jim J-R
4.0 out of 5 stars There are a number of things about this book that I enjoyed. It’s a proper investigation
Reviewed in the United Kingdom on 25 July 2018
Verified Purchase
I find myself with an interesting relationship with the Dresden Files. I put off reading this one, concerned that as I wasn’t feeling excited at the prospect of picking it up that I’d gone off the series. But actually once I did lift it from the shelf and get stuck in I found myself really enjoying it.

The story begins with a cry for help from a family member of a friend, which in turn drags Dresden, Chicago’s only wizard PI, into an investigation into supernatural occurrences around the city and beyond.

There are a number of things about this book that I enjoyed. It’s a proper investigation, and I am a fan of detective stories. It reveals more about the characters, their backstories, and their relationships - and develops them in new directions as well. It builds more into the world and the mythology of the series. And it’s a good adventure.

So overall I’m left feeling much more engaged with the series, and I hope I can keep that feeling forefront in my mind when I’m choosing what to read in the future and my gaze drifts to the shelves for B.
Read more
One person found this helpful
Report abuse

perfectly_calm
4.0 out of 5 stars Black Magic
Reviewed in the United Kingdom on 19 April 2015
Verified Purchase
Onto number 8...
Same as before really; if you've read this far, likelihood is you'll keep doing so.

A few notes on the differences from book 7 -- Karrin and Michael are back (though the latter only gets a few scenes); the White Council appears a lot more now, since Harry was made a Warden in the last outing, which has a lot of potential moving forward; Michael's daughter, Molly, is the "chosen" supporting character here; no Butters, and no Mavra (thanks be).

Main plot revolves around black magic users in Chicago and a wave of fear demons. This all is designed to link into the Faeries being involved in the longer storyline of the White Council's war with the Red Court vampires.

This does mean the the Sidhe appear once again (both Summer and Winter) -- I think the fae are used a little too often, hardly something I'd complain a lot about, but they are getting stale for me.

Overall, a fun read as normal. Characters develop a bit, talk some things out and circumstances change for Harry, Michael and Karrin. Some discoveries are made and the book ends once again in a good place looking forward to #9.
The action sequences don't work so well for me here -- harder to visualise I found -- so is paced a little slower than Dead Beat.

lyra
5.0 out of 5 stars Developing nicely...
Reviewed in the United Kingdom on 7 August 2014
Verified Purchase
There are UF series that start well and morph into something strange and alien, those that promise much and then fail to develop and those that frankly need a certain level of patience while the writer learns their craft, whereupon the books take off. The Dresden Files falls into the last category. The opening few books are not that well written and a little tedious, but they have been steadily improving, especially since Thomas's appearance and the inclusion of the Vampire court. In books 7 and 8 Butcher has finally got the right balance with regard to narrative, pace, humour, supporting characters, world building and style.

Dresden is still prone to frequent near death experiences but hellfire provides some more convincing resilience. Dresden's role as a noir supernatural private 'dick' has developed into an entertaining character and though narrative development can be heavy handed - the resolution to Molly,'s antics were a tad predictable - overall the novel works well as a noir supernatural UF/detective hybrid. It probably works best if you don't take Dresden too seriously.

Some readers that the narrative isn't complete of itself-that is true; Proven Guilty is clearly part of a longer story arc. In previous novels Butcher has placed a stronger emphasis on the novel as a relatively independent unit with just a hint of a larger story arc. The balance is different on this one but I enjoyed this change of narrative structure and will happily move on to the next.
Overall a 4.5.

SPOILER ahead:
I'm not totally sure if I think Butcher pulled off the dynamic between Dresden and Molly, on the one hand I was relieved that he firmly dismissed cliched teacher/student romance which nonetheless appears irritatingly often in novels. On the other hand the set up was suspiciously gratuitous and awkward. (We won't have sex, but lets strip 17 yr old Molly in order to play through a humiliating rejection scene anyway. Hmm.) Given how Dresden always presents himself as a gentleman, I wasn't convinced this was in character; I'm also not sure that Molly would be quite so forward. It doesn't sit well, but assuming Butcher does move swiftly on, I could overlook it.
Read more
Report abuse

Anne
5.0 out of 5 stars Doing the right thing - excellent entertainment
Reviewed in the United Kingdom on 4 April 2015
Verified Purchase
Don't start here if you are new to this series - each book adds to the previous ones to build a full and complex story and you would be losing out considerably if you didn't start at the beginning.

Harry Dresden is now a Warden of the While Council as a result of the casualties during the War with the Red Court (vampires). It isn't a role that he wants and it isn't one that he appreciates when faced with some of the hard decisions that have to be made but this is a war between good and evil and Harry is also facing that in his own head as he has has a demon living in his mind who wants full control of him. There are rumours of black magic happening in the city when Harry is called by a young friend to a horror convention where dreadful things are happening. Harry has to fight the evil at the convention, determine who has been doing black magic and bring them to justice, look after the daughter of a dear friend and try and work out why the faeries won't help in the War. Pretty much the usual sort of thing that Harry does.

This book works at two levels. Firstly there is the convention and the immediate danger to Chicago. Then there is the war and the strategic importance of getting the faeries involved. Overarching these is the suspicion that there is something bigger and more evil happening that Harry has begun to glimpse. There are lots of exciting fights against evil especially at the convention and in the NeverNever but the best fights are in Harry's head and when he has to face the White Council and plead for the life of a child, There are casualties in the war too and it is not easy being Harry's friend, acquaintance, dog or brother.

Harry Dresden is one of my favourite literary heroes. He is a man who has significant limitations and is often overwhelmed with fear but has decided that neither of these matter you are doing the right thing. The right thing is so important to him that Harry will risk death or worse to ensure that good triumphs over evil. He also has quite astonishing bad luck and a habit of speaking his mind (the two may be linked). This book is written with great wit and imagination and brings in details from lots of previous books so that you begin to see the way that the series is going. Harry is on a journey of discovery - I want to join him as the story progresses.
Read more
One person found this helpful
Report abuse

MJ
5.0 out of 5 stars Very good.
Reviewed in the United Kingdom on 19 August 2020
Verified Purchase
Even better than book seven. Dresden's world is getting satisfyingly complex, but in an internally consistent way. Everything hangs together so much better than in the earlier works. I'm really glad I stuck with the series.
Read more
Report abuse
See all reviews