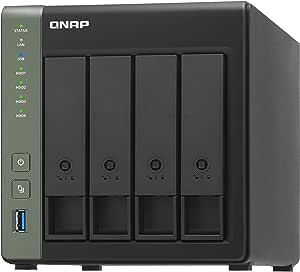 The quad-core TS-431X3 provides four drive bays for high-capacity storage with expandable memory up to 8GB RAM to meet data backup, recovery, and virtualized storage needs of SMBs. The built-in 10GbE SFP+ port provides high bandwidth for intensive data transmission. Coupled with the QNAP 10GbE switch, you can build a high-speed 10GbE network environment. The TS-431X3 also features a 2.5GbE RJ45 port and a 1GbE RJ45 port for enhancing team file sharing and collaboration efficiency. The TS-431X3 provides comprehensive local, off-site and cloud backup and secure Snapshot technology to help create a reliable backup and disaster recovery plan. In the event of a system crash or accidental file deletion, you can quickly restore the system to its normal state.

Protect your files from Ransomware attacks or any unexpected situations that could jeopardize your system. Snapshot can quickly and easily revert back to previously recorded states.

Protect your files from Ransomware attacks or any unexpected situations that could jeopardize your system. Snapshot can quickly and easily revert back to previously recorded states.

Qsync provides efficient file synchronization between a QNAP NAS and linked devices. It turns the TS-431X3 into your own business private cloud without any monthly fees.

3.5 out of 5 stars
3.5 out of 5
2 global ratings
How are ratings calculated?
To calculate the overall star rating and percentage breakdown by star, we don’t use a simple average. Instead, our system considers things like how recent a review is and if the reviewer bought the item on Amazon. It also analyses reviews to verify trustworthiness.

S. McCandlish
4.0 out of 5 stars Good enough so far
Reviewed in the United States on 15 February 2021
Verified Purchase
I've used a QNAP before, in a work-related setting, so I already knew what to expect. These are reliable devices in my experience, and they get the job done, especially the core job of a NAS: acting as a backup drive and file repository/server.

One thing to expect is to read a lot of online material, probably mostly through forums, where you're likely find clearer and quicker answers than in the formal documentation.

The device is high-quality, and mostly pretty easy to set up. However, you have to jump through a lot of fiddly hoops to enable CIFS/SMB (Windows file sharing) and NFS (Unix/Linux/macOS file sharing( on it, and actually use it as a backup device. This stuff should be much, much easier to find and configure, and a wizard should walk you through it right at first-setup time, since 99% of people buying this want to use it as a backup drive through one or both of those protocols.

I find it very frustrating that QNAP goes out of their way to try to prevent you installing any Unix/Linux software that they did not pre-approve (their QTS is a form of Linux). Sure, it's for the same general reasons that Apple and Google try to lock down iOS and Android, but it's still really, really annoying for tech-savvy people (though there are ways around it, which you'll have to do some online research about, if you need it). The already "approved" and available apps are frankly too few. They need to open this up more to open-source development teams, instead of mostly just partnering with commercial software providers who ultimately want to sell you something. E.g., it's really weird to me that this has no available CMS to install other than Joomla, and no blogging platform other than WordPress, nor any wiki alternative to MediaWikia (which is bear to administer). All that said, operating as a server of sorts is just add-on functionality for what is primarily a backup storage device, and QNAP is among the top three or so providers in the NAS market. I can't personally gauge a sharp distinction between them, other than this beats the pants off some of the not-in-the-top-3 providers.

The tools for managing devices and logical volumes are pretty good. It's potentially convenient but potentially also massive security hole that you can use this as a cloud server, either directly or through an interface at QNAP's own website. I like the concept, but I believe it turns on too many things by default, and is too unclear about what they mean and what their potential for abuse is, when you first enable this stuff. Honestly, it is best to set up and test all features of this device over several days and decide what you want to do with it, BEFORE you start using it as your backup storage. And definitely create a proper user account with a unique password to act as the active administrator, instead of using the default admin account (and scramble the password of that one with some very long gibberish - but be sure your personal user account actually is set up as an admin first!), since people trying to system-crack your device are going to be going after the built-in admin account).

Another dumb thing is that pretty much everything you install as software for QTS ends up running at all times, at least in "stub" loader daemon form. It's a lot like installing phone apps, and it wastes a lot of RAM and CPU power. So, don't install every QTS app that seems like it might be useful some day. Only what you plan to use right now. If you turn out not to use something, uninstall it. Another annoying symptom of this problem is that when you need to restart the QNAP, it takes FOREVER to shut down all these apps, and will sometimes just outright fail at it, requiring you to do a forced shutdown. This is weird and senseless. No computer of any kind, be it a Windows PC, a Linux workstation, and Mac laptop, a game console, a router/gateway, a phone, or anything else of this sort, takes even a fraction of the time it takes a QNAP to shutdown and/or restart. I'm going to call this an outright bug; something about its process management is simply screwed up. But this is not a fatal problem, simply an obnoxious one.

Anyway, I have this device running 24/7 and it does not exhibit any operational/reliability problems. It's not the quietest thing in the world, but I also have a HEPA air filter and a PC running all the time, so the QNAP's sound just fades into the white noise. If you prefer total silence you may want it in a closet. Or if you're DIY-oriented, get a Noctua (quietest brand ever) replacement fan for it. Just keep the original in case you have to RMA the QNAP within its warranty period. Given the price, I think buying the extended warranty is a good idea, but only just before the original warranty expires.
Read more
3 people found this helpful
Report abuse
See all reviews
Pages with related products. See and discover other items: Top rated in Network Attached Storage (NAS) Devices
Back to top
Get to Know Us
Make Money with Us
Let Us Help You
And don't forget:
© 1996-2021, Amazon.com, Inc. or its affiliates