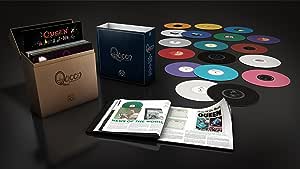 Secure transaction
Your transaction is secure
We work hard to protect your security and privacy. Our payment security system encrypts your information during transmission. We don’t share your credit card details with third-party sellers, and we don’t sell your information to others. Learn more
Details
Ships from
Amazon AU
Sold by
Amazon AU
Complete Studio Lps (Colo... has been added to your Cart
New (4) from
$702.89 + FREE Delivery

ALL 15 HIT STUDIO ALBUMS SOURCED FROM THE ORIGINAL MASTER TAPES

LPs ALSO TO BE AVAILABLE INDIVIDUALLY ON 180 GRAM BLACK VINYL

Queen always had a special fondness for vinyl, the medium in which they first began to create, around 1970. As a matter of principle, every Queen studio album was offered at the time of original release on vinyl, even well into the era when CD's had taken over as the medium of choice for most of the public. However, the final two albums, 'Innuendo' and 'Made In Heaven' were actually formatted primarily with the CD in mind, with a longer running time, so the contents had to be edited down to fit them on to the two sides of a vinyl album. Now, specially for this edition, for the first time, these two albums have been cut at full length as double vinyl LP's - four sides each making up a vinyl set that is complete in every way.

The box-set offers many other special features. Most noticeable is the colored vinyl: designed for collectors, each album has been given a different color, in keeping with its original artwork, giving a unique record-deck experience. The color discs have been custom-produced especially for this set, using new material technology which ensures the sound quality is uncompromised.

There are more surprises in the box set; 'Queen II' originally never had a designated 'A side' or 'B side' - but 'Side White' and 'Side Black'. For this new edition, the album has been cut on two separate discs, black and white, each with a custom etching on the reverse side, a nice bonus for collectors.

The collection has been five years in the making. Throughout this time Queen's production team has worked extensively on all stages of this painstaking mastering process. The first step was the tape research; locating and confirming the correct versions and best sources for all tracks. Most notably, Under Pressure, plus five tracks on the 'Innuendo' album, were improved hugely after the discovery of better sources during this period. Particular attention was paid to the original releases to ensure that nothing was lost or changed for the worse by reverting to earlier sources.

The 18 vinyl LP box set comes with a lavishly illustrated 12 x 12 inch 108-page hardback book which features introductions to each album, quotes from Queen themselves, hand-written lyrics, rare photographs, memorabilia, and information on singles and videos - all made possible with unlimited access to Queen's own archive plus the personal archives of Brian May, Roger Taylor and some generous fans. Thanks to all.

4.8 out of 5 stars
4.8 out of 5
474 global ratings
How are ratings calculated?
To calculate the overall star rating and percentage breakdown by star, we don’t use a simple average. Instead, our system considers things like how recent a review is and if the reviewer bought the item on Amazon. It also analyses reviews to verify trustworthiness.

cam
5.0 out of 5 stars Super service
Reviewed in Australia on 6 August 2020
Verified Purchase
Arrived from the US within a week (to Australia). Amazing collection and terrific price (half what it can be found for in AU). A must have for serious vinyl collectors.
Read more
Helpful
Report abuse

Dave
5.0 out of 5 stars Great value and price
Reviewed in Australia on 28 December 2020
Verified Purchase
Great price, I shopped around and this was the best price by far.
Read more
Helpful
Report abuse
See all reviews

ClifB
5.0 out of 5 stars Great box set of a superb band
Reviewed in the United Kingdom on 21 October 2020
Verified Purchase
This is a neat and comprehensive box set.

It is clear that great effort has gone into the mastering as, although lots of Queen albums were not recorded to a gold standard, significant increases in sound quality are evident in the bass quality and control and openness in higher frequencies.

The pressings done by Optimal are very good but not A1 superb. There is a bit of surface noise on most albums and a few pops and ticks that don't clean off with a record cleaning machine. I wonder if the stampers are a bit tired after they reissued these pressings. However, the sound is really good and a clear improvement over earlier pressings.

The music speaks for itself really. A very talented band who produced a great variety of music over their career.

J. J. Massey
3.0 out of 5 stars Missing black slip case.
Reviewed in the United Kingdom on 31 August 2020
Verified Purchase
Whilst I’m pleased with the item overall, it did not arrive with the black slip case depicted in the images.

I’m not sure if this is because this was not available with the second run of this product, but if that’s the case it should not be featured in the images.

Disappointed I can’t contact Amazon about this without instigating a full return - I’d just like the slip case to be sent out if it exists.

Mr.Vertigo
5.0 out of 5 stars Queen in full colour.
Reviewed in the United Kingdom on 20 February 2020
Verified Purchase
Beautifully presented box set of Queen's studio albums. The coloured vinyl is a nice touch and well matched to the album art. The book is printed on high quality paper and is genuinely interesting. Very difficult to find anything to complain about. Sets the benchmark for retrospective collections by other artists.
Read more
3 people found this helpful
Report abuse

Mr R D Clark
3.0 out of 5 stars Could be better
Reviewed in the United Kingdom on 28 November 2018
Verified Purchase
The good bits.... fantastic album set in coloured vinyl, all the Queen studio albums and a limited edition book with all the details of the album's.

The downside Is that the transit packaging is poor for such an expensive item. Part of the album's box set is damaged because of the transit packaging and internal packaging had come out during transit, leaving the box set to move at will. No order or transit documents came with the item and the box had been opened at some point on its journey.

Eddie
1.0 out of 5 stars No original outer box
Reviewed in the United Kingdom on 30 November 2018
Verified Purchase
Item wasn’t in the orignal outer box that comes from the original manufacturer
Read more
7 people found this helpful
Report abuse
See all reviews
Back to top
Get to Know Us
Make Money with Us
Let Us Help You
And don't forget:
© 1996-2021, Amazon.com, Inc. or its affiliates