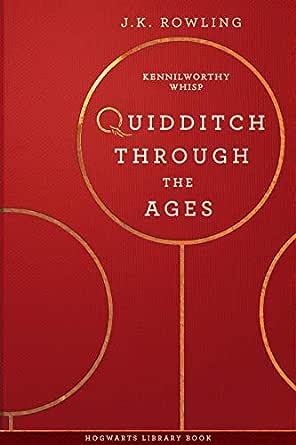 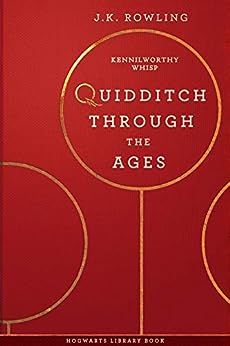 A veritable treasure trove of hitherto unknown facts about the sport of warlocks (Bathilda Bagshot, author of A HISTORY OF MAGIC)

A thoroughly enjoyable book; Quidditch fans are sure to find it both instructive and entertaining (Which Broomstick?) --This text refers to the hardcover edition.

J.K. Rowling is the author of the record-breaking, multi-award-winning Harry Potter novels. Loved by fans around the world, the series has sold over 450 million copies, been translated into 79 languages, and made into eight blockbuster films. She has written three companion volumes in aid of charity: Quidditch Through the Ages and Fantastic Beasts and Where to Find Them (in aid of Comic Relief), and The Tales of Beedle the Bard (in aid of Lumos), as well as a screenplay inspired by Fantastic Beasts and Where to Find Them. She has also collaborated on a stage play, Harry Potter and the Cursed Child Parts One and Two, which opened in London's West End in the summer of 2016. In 2012, J.K. Rowling's digital company Pottermore was launched, where fans can enjoy her new writing and immerse themselves deeper in the wizarding world. J.K. Rowling has written a novel for adult readers, The Casual Vacancy, and also writes crime novels under the pseudonym Robert Galbraith. She has received many awards and honours, including an OBE for services to children's literature, France's Légion d'honneur and the Hans Christian Andersen Award. --This text refers to the hardcover edition.

Brand new edition of the most famous sports book in the wizarding world - an irresistible read for all Harry Potter fans. J.K. Rowling's original text, with gorgeous jacket art by Jonny Duddle and line illustrations throughout by Tomislav Tomic. --This text refers to the hardcover edition.
Read more

4.7 out of 5 stars
4.7 out of 5
1,327 global ratings
How are ratings calculated?
To calculate the overall star rating and percentage breakdown by star, we don’t use a simple average. Instead, our system considers things like how recent a review is and if the reviewer bought the item on Amazon. It also analyses reviews to verify trustworthiness.

Finn Allen
4.0 out of 5 stars OML ITS AMAZING
Reviewed in Australia on 17 January 2020
Verified Purchase
Hi there. If you were thinking of purchasing this E-book then I highly recommend you do.

Not only does 'Quidditch Through The Ages' have every single possibly existing fact about the outrageous game Quidditch (Created through the brilliant mind of Joanne Kathleen Rowling*)but it answers all those questions.

* J.K Rowling Is Called Joanne
**Spoiler Alert. Quidditch has been around since before 1400

I like to read
2.0 out of 5 stars omg so wierd
Reviewed in Australia on 20 July 2020
Verified Purchase
it was a good book but also crude and yuck I don't think that Jk Rowling is a natural at telling fairy tales as she is as telling those awesome tales of Harry Potter

Irena Purnell
5.0 out of 5 stars Amazing!👍
Reviewed in Australia on 15 November 2019
Verified Purchase
I'm into J.K.rowling so this was a grand read.👍
I got into it straight away. My friend Edi suggested the book to me.
Read more
Helpful
Comment Report abuse

Sara Russell
5.0 out of 5 stars Easy fast fun read
Reviewed in Australia on 17 April 2017
Verified Purchase
If you love Harry Potter then it's just a quick fun addition to the books. No more to it than that. Also, it's money for charity, so don't be cheap.
Read more
Helpful
Comment Report abuse

Bookworm
3.0 out of 5 stars Hello
Reviewed in Australia on 11 February 2019
Verified Purchase
To know more about quidditch because I love all things Harry Potter!
Read more
Helpful
Comment Report abuse

Amazon Customer
5.0 out of 5 stars Highly enjoyable
Reviewed in Australia on 6 September 2016
Verified Purchase
A fun history and a greater look into the world of Harry Potter. Can't wait to read more of the potter more collection
Read more
Helpful
Comment Report abuse

LS
4.0 out of 5 stars Came in great condition
Reviewed in Australia on 10 June 2020
Verified Purchase
Quite happy with product, had no issues.
Read more
Helpful
Comment Report abuse
See all reviews

Zoe
5.0 out of 5 stars Interesting..
Reviewed in the United Kingdom on 14 January 2014
Verified Purchase
I found this book to be far better than "fantastic beasts and where to find them" as it goes in to more depth with the history, which could be seen as very convincing. The book starts off by going into explaining the humble beginnings of the game in a wizard's family garden. The book continues on to the more primitive, earlier version of the game, the rules and the controversies, the historic games, the advances in broomsticks - how it was popular to make your own in the early stages of the games before witches and wizards eventually decided to buy them made from companies. It also talks about the balls used in the game and what they were once originally made of and what the Golden Snitch was based on. It finishes by explaining how the game is played today.
Throughout there are mentions of prominent Teams and Players throughout the world and how it spread throughout. A whole chapter being dedicated to the Quidditch teams of The UK and Ireland.

I love how Rowling does a great job making this world believable that it's actually real. I think all Harry Potter fans should at least read this once.
Read more
15 people found this helpful
Report abuse

Paul Dean
5.0 out of 5 stars Excellent further reading for the Harry Potter fans out there!
Reviewed in the United Kingdom on 10 May 2018
Verified Purchase
Excellent book from JK Rowling adding another sprinkle of magic to the Harry Potter universe. If you're a fan and you've read everything else HP related then I'd recommend investing in a copy of Quidditch Through the Ages as referenced in the books themselves!
Read more
3 people found this helpful
Report abuse

Diane Howard
1.0 out of 5 stars For Fanatics Only
Reviewed in the United Kingdom on 12 December 2018
Verified Purchase
Having read most of what has come out of the Wizarding World of JK, I would love to say this is a mandatory addition to collectors world over, but the sentiment is quite the opposite. Now unless I’d be intrigued by the factual delights of sport, I would be hard pressed to find this edition in the slightest entertaining what so ever. On the other hand, if you’re a harry potter fanatic, you may be able to get a kick out of even that with all things Quidditch.
Read more
One person found this helpful
Report abuse

kevin
4.0 out of 5 stars Good but initially download issue.
Reviewed in the United Kingdom on 2 March 2019
Verified Purchase
Started reading and good. Issue was that drum version initially downloaded and kindle refused to play and had to redownload . Certain did download kindle version.
Read more
One person found this helpful
Report abuse

Grumpa
5.0 out of 5 stars Five Stars
Reviewed in the United Kingdom on 22 June 2017
Verified Purchase
Very good I know that the companys are milking the Harry Potter name but it is still good reading
Read more
3 people found this helpful
Report abuse
See all reviews
Get FREE delivery with Amazon Prime
Prime members enjoy FREE Delivery and exclusive access to movies, TV shows, music, Kindle e-books, Twitch Prime, and more.
> Get Started
Back to top
Get to Know Us
Make Money with Us
Let Us Help You
And don't forget:
© 1996-2020, Amazon.com, Inc. or its affiliates