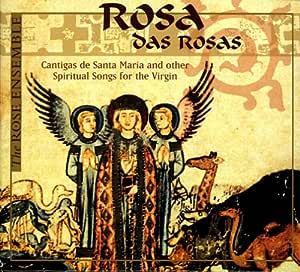 Secure transaction
Your transaction is secure
We work hard to protect your security and privacy. Our payment security system encrypts your information during transmission. We don’t share your credit card details with third-party sellers, and we don’t sell your information to others. Learn more
Details
Ships from
Amazon US
Sold by
Amazon US

Centuries of dedication and folklore in the chapels and courts of early Italy, Spain and Portugal produced music with rhythms that reverberated across the Mediterranean. In this recording spanning three centuries of vocal and instrumental music, a diverse collection of lyric poetry, dances, Italian spiritual songs, and Galician-Portuguese Cantigas de Santa Maria tell of the Virgin s sometimes-humorous, always-incredible miracles.

The Virgin Mary is the subject of this program of songs from late-medieval and Renaissance Spain and Italy. There are 6 cantigas from the codex of Cantigas de Santa Maria, which was compiled between 1257 and 1283 at the court of Alfonso the Wise. There are several monophonic and polyphonic Italian laudas from the Grey Collection (MS Cape Town 3.b.12), a manuscript so called because it comes from the library Sir George Grey donated to the South African Library in 1861. The program also includes religious works in Spanish and Latin by Juan del Encina (1485-c. 1530), Juan de Anchieta (1462-1523), and Francesco Guerrero (1528-99).

Un Sañoso Porfia is quite a solemn song that commemorates the conquest of Ferdinand and Isabella over the Moors. Sung from the point of view of the conquered Moor, it is a simple song composed with very close, parallel triadic harmonies. The laudas are the work of musicians active among the confraternities in Northern Itlay, probably in Modena, Ferrara and Mantua. They are quite similar to the laudas one finds in the more famous collections from Florence (Codex Magliabechniano, 14th c.) and the Cortona Laudario (13th c.). Simple strophic structures with refrain are normative, sung here by soloist or small choir. Or Piangiamo, Che Piange Maria is the Virgin Mary s lament at the scene of the crucifixion. The text is deeply evocative and mystical in its subject matter; it is performed here by solo singer with occasional exclamations by a small choir. The choral passages demonstrate the same preference for parallel triadic sonorities as one hears in the cantigas.

The singing is quite competent. Singers are often accompanied by vielle and percussion, similar to other recordings of this repertory --American Record Guide

The Rose Ensemble is a Minnesota-based early music group which, like the Waverly Consort, weaves folk, medieval, Renaissance and Baroque music (both insturmental and vocal) into a rich and dramatic tapestry as entertaining to see as to hear. Rosa das Rosas is their seventh CD... The program is centered on six cantigas from the collection of Alfonso X, around which are grouped Italian laude and pieces from the court of Ferdinand and Isabella. All are unified by some textual connection to the Virgin Mary.

There is splendid variety here. Although much of the music is monophonic, the ensemble utilizes discreet instrumental accompaniment, including harp, psaltery, vielle, and percussion. The numerous stanzas of the cantigas are varied by timbre, range, accompaniment and the occasional use of primitive harmonizations; two of them are performed by instruments alone, and one is recited rather than sung in the manner of a monodrama. Even the longish (over nine minutes) Una sanosa porfia of Juan del Encina is kept interesting by the alternation of various voicings and subtle percussion. There are 11 singers in the group; they typically sing in an unaffected manner, sometimes adding a slight edge to the tone. Tuning is impeccable. The performances, based on thorough and up-to-date research, are impassioned and brightly alive.

The presentation is attractive (forgoing the usual plastic jewel case for an appropriately decorated cardboard sleeve) and the ambient acoustic (Webster Music Hall at the University of Minnesota, Duluth) is appropriately church-like. Notes, texts and translations are provided. Highly recommended to lovers of this repertoire. --Choral Journal

From Spain on outward across Europe, recordings of the Cantigas de Santa María have proliferated. In the U.S., despite the strong roots of small-group medieval music in that country, they have been considerably rarer, and between the coasts almost nonexistent. Thus, it's a pleasure to encounter the Rose Ensemble, of St. Paul, MN, and to find it receiving praise from European press outlets. The group's take on medieval music is unusual and worked out to quite a degree of detail, which is all to the good. It's not exactly "authentic," although in their basic emotional commitment to the music and avoidance of the feeling that they are presenting something antique, these 12 musicians show themselves to be part of the latest early music wave. What's most unusual is the program. The Cantigas de Santa María were a group of several hundred monophonic songs, putatively in praise of Mary but really, like Chaucer's Canterbury Tales, illuminative of various aspects of life in medieval times. They were compiled, and perhaps in some cases composed, by King Alfonso X of Castile and León, known as El Sabio, in the thirteenth century. The Rose Ensemble combines these with other "spiritual songs for the Virgin" dating from as much as three centuries later: polyphony by the Spanish composer Juan del Encina, Italian laude, and even a full-scale Renaissance motet by Francisco Guerrero. The Cantigas themselves are accompanied quite minimally, perhaps by just one of the small collection of stringed instruments (plus a cow bone) used by the group. Thus, the polyphonic pieces create an impression of comparative lushness. For the listener who has heard a lot of recordings of the Cantigas de Santa María, these contrasts may be something like suddenly throwing music by Beethoven into a recital of Elizabethan virginal music. But for general listeners the sequence of pieces, all linked by their Marian themes, may make perfect sense. For the singers themselves it certainly seems to; they land in an intriguing space between English purity and Spanish gutsiness, and they have impressive pitch control throughout in a challenging small-group context. They respond to what they're singing about when they render the vivid storytelling of the Cantigas, rendering the titles of the individual pieces as spoken introductions. The texts of each piece, including these titles, are given in their original languages (Galician-Portuguese for the Cantigas, Spanish, and Italian) and English; booklet notes are in English only. A campus music auditorium at the remote University of Minnesota at Duluth makes a reasonable stand-in for a medieval palace or monastery. Recommended, especially for newcomers to medieval and Renaissance music, for these performances make the music come alive. --AllMusic

BJAK
5.0 out of 5 stars This is a great contribution for Christmas and beyond...
Reviewed in the United States on 26 March 2013
Verified Purchase
Marianist reflections and praises... Mexican devotionals... nicely performed by the Rose Ensemble. in Spanish. The Madonna, and the Mother of God... The Mediatrix... Transporting... and Transcendent
Read more
4 people found this helpful
Report abuse
See all reviews
Back to top
Get to Know Us
Make Money with Us
Let Us Help You
And don't forget:
© 1996-2021, Amazon.com, Inc. or its affiliates