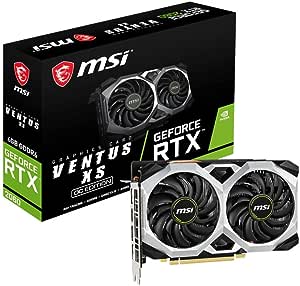 4.5 out of 5 stars
4.5 out of 5
328 global ratings
How are ratings calculated?
To calculate the overall star rating and percentage breakdown by star, we don’t use a simple average. Instead, our system considers things like how recent a review is and if the reviewer bought the item on Amazon. It also analyses reviews to verify trustworthiness.

G H
5.0 out of 5 stars Best value for money.
Reviewed in the United Kingdom on 1 July 2019
Verified Purchase
I was going to have the Zotac, but as I've had a MSI r9 280x for about 5 years I said, let's continue with MSI. I was going to give the zotac a try because of some reviews about temperature of the MSI, that it does run a bit hot.

* Overall
This RTX generation is a must.
It delivers so much power, and has so much performance compared to the previous GTX series. I was expecting it to be ok, but its amazing. Well packaged, well built. Comes with nothing, just a cd for drivers (which I have no cddrive to use)

* Hardware
It is extremely well built. Compact, really solid. Seems to be made of good materials ( heavy ). There is a dual fan set, and it runs extremely quiet, even under load. It requires a 8-pin power (adapters not recommended). I've run for the first days with an adapter, and it ran great, but please bear in mind that it could not be getting the correct voltage and amp, and this could damage in the long run, get a 8-pin power supply.

* Performance
It basically runs 4k. I say basically because if you are not those stubborn PC is better, lower the settings from Ultra to Very High or High, and you could be running 4K@60fps. I can attest to that to some extend. Some of the newer games I can't not because of the GPU, but my CPU ( 2500k i5 from 2012), it bottlenecks hard, and the GPU seems to sit at 60% at max, so it's not even being used. There is plenty of room for 4k.

* Games
Basically some games that I could run at 1440p@60fps (Note, all of these run at 4k, but stutter due to my CPU, so probably can run on 4k)
- Witcher 3
- Ghost Recon: Wildlands
- Sniper Elite 4
- Strange Brigade

* Cons
None yet. Will update if I have any.

avocheeseado1
4.0 out of 5 stars Great! But wait for sale.
Reviewed in the United Kingdom on 26 March 2020
Verified Purchase
This is a great Graphics card but wait untill its on sale as it dips below 300 pounds a lot.

Cons: Some noticable coil whine when gaming
Can't overclock massively
RTX on minecraft - runs at at the most 11fps so if you want rtx, get at least an RTX 2070

Overall this is a great GPU for 1440p gaming at 144fps on most games.
Read more
8 people found this helpful
Report abuse

Gabriel Somers
5.0 out of 5 stars Perfect for 1080p gaming
Reviewed in the United Kingdom on 10 June 2020
Verified Purchase
This card will run anything you throw at it smoothly at 1080p on high settings. At 1440p It can easily handle less demanding games like CS:GO and LoL but does begin to struggle with newer/more demanding games like DOOM Eternal.

The card has a good design and the fans are nice and quiet while idle but even while gaming it's not too loud. I got it for £296 which is amazing value for a card this good.

Don't bother getting this card for anything ray tracing related, it doesn't handle it well but there are very few games that support it anyway.
Read more
One person found this helpful
Report abuse

simon pilch
5.0 out of 5 stars decent priced mid range card
Reviewed in the United Kingdom on 14 October 2020
Verified Purchase
classing this as a mid range card now the 3000 are out but for the price this was a decent enough upgrade from my 780ti, no complaints from anything i have ran from it yet, coupled with 16GB ram and ryzen 7 3700 on a b450-f motherboard this has played well, i have upgraded the cooling in my system as it did run hot on the card 78 - 82 running full spec on death stranding and div 2 but now im running ok at high 60's under full load, ray tracing is cool!!!
Read more

Report abuse
See all reviews
Get FREE delivery with Amazon Prime
Prime members enjoy FREE Delivery and exclusive access to movies, TV shows, music, Kindle e-books, Twitch Prime, and more.
> Get Started
Back to top
Get to Know Us
Make Money with Us
Let Us Help You
And don't forget:
© 1996-2020, Amazon.com, Inc. or its affiliates