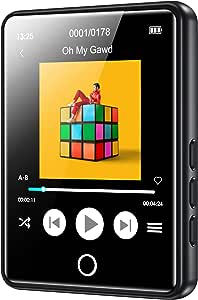 RUIZU M17 mp3 player comes with Bluetooth 5.0 version, it can be connected to audio output devices such as headphones, earphones, and speakers. A portable music player with a mini size brings you a really easy way to take when morning workout. And As convenient as using a smartphone with a full touch screen, very useful for various purposes such as school, commuting, rest, and sports. And the manufacturer prepares test songs and videos in the music player so that you could check the function as soon as you get it.

Before using this mp3 player please read the user manual carefully. Thank you

3.7 out of 5 stars
3.7 out of 5
121 global ratings
How are ratings calculated?
To calculate the overall star rating and percentage breakdown by star, we don’t use a simple average. Instead, our system considers things like how recent a review is and if the reviewer bought the item on Amazon. It also analyses reviews to verify trustworthiness.

Cliff Sloane
5.0 out of 5 stars Well made, lots of features, great value
Reviewed in the United States on 23 July 2020
Verified Purchase
I am a serious fan of podcasts. I listen to many titles, perhaps 2 hours a day, and all are spoken. Over the last 16 years, I have gone through several brands, so I look for a few key faetures. I have been using this Ruizu device for only three days, but it has performed very well, meeting most of my standards.
The Ruizu M17 has a touchscreen interface, a first for me in MP3 devices. The screen locks with a quick tap on the Power button, and unlocks the same way.
The main page has icons for Music (5 formats), Movie (AVI/AMV), Radio (3 band settings), Ebook (TXT only), Pedometer, Photo (JPG)and such utilities as a list menu, stopwatch, calendar/alarm and recording (MP3 or WAV). All the features can be found at no more than three menu levels, often just two. The text is small, so I have to be careful when touching, but navigation is very easy. It has Bluetooth, and it is described as being there mostly for wireless headphones. As is true for most players, it accepts MicroSD up to 128 GB; files are sorted by ID3 tags, then alphanumerically inside.
One of the features I came to cherish in a player is variable speed. The BBC folks talk slowly, so I like to play it faster. This device has a setting for speed, so +8 means a 60-minute podcast plays in 44 minutes. Once you set the playback speed, all the files play the same until you change it. If I could make a suggestion to the developers, I would create a separate icon for Spoken )(or Podcast or Audiobook) and allow Music to play normally but Spoken to play faster. SanDisk, for example, only enables playback speed for Podcasts.
Most of my podcast-listening friends use their phones and streaming rather than downloading and copying to a dedicated device as I do. The key selling points for using MP3 players have to be the lightness and the battery. This device makes my arguments slightly harder. It is far heavier (most are 25-30 grams, while this one is 70 grams), most of which is evidently the battery; after two hours of play, the battery remained at 80%. But the heaviness makes this less attractive as a sports device. The large capacity (16GB plus MicroSD) and the ease of navigation made it ideal for me.

Seestar27
5.0 out of 5 stars Easy to navigate
Reviewed in the United States on 31 July 2020
Verified Purchase
I bought this for my husband-who is technically challenged...and wanted music for his car. This is easy to use with the touchscreen and menu selections. Once the music is loaded you can sort it the same way as other popular music players. It shows the album cover on the screen and even has a speaker built in! It also connects through bluetooth very easily, too. We plan to use it in the house and the car. It is expandable with an sd card to more than enough music for hours of play!
Read more

francisco
5.0 out of 5 stars Good bang for your buck.
Reviewed in the United States on 21 July 2020
Verified Purchase
For the price point this is a good mp3 player. It seems to be well made, the battery is long lasting and it will hold around 1500 songs (plus you can add an sd card for more). Also, the speaker is surprisingly clear. The only down side for me was that the charger included was just a usb cable and I prefer to charge with an outlet. However, I can use my cell charger for the mp3 player so it isn't a huge deal.
Read more
4 people found this helpful
Report abuse

MandBinc
3.0 out of 5 stars Tricky device
Reviewed in the United States on 19 August 2020
Verified Purchase
It may have been my MP3 player but the device would shut down after playing for a while. I thought at first it was defective as I could not turn it back on. After a little trouble shooting, I figured out that you need to press the on/off button until the logo screen came on. I also determined that the AUTO-shutdown on my unit was set to three minutes. After turning off that feature it worked ok except when I want it to play all my music, it always seems to start from the beginning and replays the same few songs. Turned on the shuffle feature and that seems to help. Otherwise it is a nice little device. Have not tried the ebook feature as yet. Do not know if I can read a Kindle book on it.
Read more
One person found this helpful
Report abuse

rkchin
3.0 out of 5 stars albums get mixed up, titles don't get scrolled until they are played
Reviewed in the United States on 26 September 2020
Verified Purchase
nice tiny unit, seemingly a well built piece of hardware. software, however, not really good. the user interface is really annoying and lacking. in the main menu, there are a bunch of icons "music" "bluetooth" "browser" etc.

I'm having this weird little problem: I go click on "music" to play music. one of my reggae music folders on the external card contains 95 songs in it, and for some reason when I'm playing songs off the album i get another album mixed into the playlist. the playlist is empty. i checked the reggae folder on the card to see if any other files are there besides the ones i want in there. i even delete the ruizu auto generated files on that card, i do factory reset, tried a reformat of the device, nothing. still get that album mixed in. I found the solution to this, that is NOT to click on the "music" icon to play music, but to click on the "Browser" icon to browse through to the music folder I want to play music from....

when the unit is playing a song, you have to hit certain spots in the touch screen interface in order for it to register and to to that feature. there are little annoyances like that. other than that, the hardware is good, the software and user interface is lacking.
Read more
Report abuse
See all reviews
Get FREE delivery with Amazon Prime
Prime members enjoy FREE Delivery and exclusive access to movies, TV shows, music, Kindle e-books, Twitch Prime, and more.
> Get Started
Back to top
Get to Know Us
Make Money with Us
Let Us Help You
And don't forget:
© 1996-2020, Amazon.com, Inc. or its affiliates