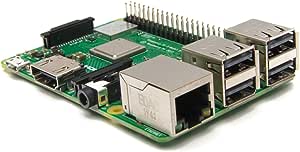 Brand: Raspberry Pi
4.6 out of 5 stars 57 ratings
| 3 answered questions
Secure transaction
Returns Policy
Amazon-managed Delivery
Your transaction is secure
We work hard to protect your security and privacy. Our payment security system encrypts your information during transmission. We don’t share your credit card details with third-party sellers, and we don’t sell your information to others. Learn more
Amazon-managed Delivery
Amazon manages delivery by using preferred couriers/agents. Order delivery tracking to your doorstep is available
New (3) from $63.90 + FREE Delivery

4.6 out of 5 stars
4.6 out of 5
57 global ratings
How are ratings calculated?
To calculate the overall star rating and percentage breakdown by star, we don’t use a simple average. Instead, our system considers things like how recent a review is and if the reviewer bought the item on Amazon. It also analyses reviews to verify trustworthiness.

Wifi access is via the Pi's own WiFi as is Bluetooth which runs a mini keyboard. That leaves two USB ports free. The only external cables are the Dell power supply (removable) and the RCA cable to the second speaker. I am building a portable power brick for it so I can play it on the go.

Voltage was an issue, so I incorporated a Buck Converter into the build which ensures a minimal voltage of 5.2 volts from the 19.5v 4.62a Dell laptop battery charger. The Pi 3B+ doesn't like voltages going below 5v, which is often the case with standard USB chargers, which may be rated 5v, but actually only have 4.95v available for the device.

Since I added the Buck Converter, I haven't had a single occurrence of under-voltage messages, or the dreaded yellow lightning bolt. I also added a heat sink to the Pi CPU, to assist in cooling it down as there is little air-flow in the box.

The Pi's audio output is connected to a TPA3116 D2 Dual Channel Digital Amplifier Board, to which I have attached a couple of speakers salvaged from an LG HiFi tower. The amplifier is also powered by the Dell laptop charger.

The thumb drive contains around 10,000 MP3 files and a downloads folder, as there is not a lot of room on the SD card. I have downloaded the open source Clementine Music Player, which is now available for Raspberry Pi, which I can use to access hundreds of streaming radio stations all round the world.

All in all I'm happy with the Pi. I have stress tested the device, playing internet radio for 48 hours non-stop, whilst running a number of Linux-based CPU stress tests.

The photos shows the completed device. This is my first ever electronic project so it is a bit rough around the edges. The second speaker is removable to enable stereo sound separation. It has been painted with black 'hammer finish' spray paint and mesh covers for the 3 inch speakers.

Having now finished the project, it works well. It boots in 23.8 seconds. It has got plenty of oonce, in fact my crockery rattles when I crank up the volume.

I like electronics
5.0 out of 5 stars Good to have as a hub for all your IOT needs
Reviewed in Australia on 14 November 2018
Verified Purchase
Decently priced device that can act as a slim server at home, especially if you have some IOT projects coming up, or just as a cache for the internet / general use for programmers.

Note that it gets to 55C (feels burning hot) quite quickly though, so a heat sink would be an appropriate peripheral.
Read more
4 people found this helpful
Helpful
Report abuse

Peter
4.0 out of 5 stars Great board for the price, but still has some quirks
Reviewed in Australia on 14 April 2019
Verified Purchase
I've had the first and second generation Raspberry Pi Bs, Raspberry Pi Zero W, and now two Raspberry Pi 3B+s. My initial experiences were a bit disappointing, as whilst the software support is great, the board seems more power temperamental than it used to be. I was fully aware of issues with the voltage going below 5v, but was surprised to see that this was still such an issue with the modern Pi, moreso than that of older ones. I ran it from a 5.02v supply with a short power lead, and had undervolt issues. I then tried a power supply that I normally use for rPis, which is tuned to 5.2v under load, and it had issues also, with several USB leads, including some good quality high amperage capable ones.

I then connected to the GPIO header, and everything was fine. I was surprised at how finicky this generation is, and how it would actually overheat because of a undervolt during boot, so would be locked at a lower CPU frequency from then onwards. I also tried the genuine Raspberry Pi power supply (didn't have those before now)... and that was fine also. Other than the power issues (which surely the onboard PMIC should be able to manage better and prevent being so much of an issue?) this is a great board performance and stability wise.

Other than the power issue, the only other complaint I have is that it does seem to run hotter than the previous generations boards when basically idling. But I suppose this is the trade off for having more performance available. Having the onboard Wifi and PoE capability is well worth the upgrade, as long as the possibility of some active cooling being needed is taken into account.
Read more
2 people found this helpful
Helpful
Report abuse

Adam C.
5.0 out of 5 stars What an incredible little device
Reviewed in Australia on 19 November 2018
Verified Purchase
Not much needs to be said about this little device that hasn't been covered in hundreds of reviews elsewhere, but this thing truly is fantastic. It's the perfect solution for when you need a low powered dedicated device to be running 24/7 and don't want to use one of your desktop machines for the task. I've got numerous Raspberry Pis in my house running different tasks and servers. My only wish is that they had more than 1GB ram, although there are plenty of other much more powerful boards available on the market if you need something with more performance, so the Raspberry Pi is still very good (and cheap) for what it offers.
Read more
Helpful
Report abuse

Peter C
TOP 50 REVIEWER
5.0 out of 5 stars Raspberry Pi 3 on steroids?
Reviewed in Australia on 27 December 2018
Verified Purchase
Compared to RPi3 B, this one has 802.11n+ac networking, better bluetooth and some other smaller differences. It's all that a Raspberry Pi is. Not sure what else to say here lol
Read more
One person found this helpful
Helpful
Report abuse

Amazon Customer
5.0 out of 5 stars Delivered on time
Reviewed in Australia on 29 May 2019
Verified Purchase
I like that this unit has the higher clock speed and 1000baseT ethernet. Would like 4GB of memory then I could see how it runs a small production J2EE java server. I'm taking the load of some of my VM instances am using Raspberry PI's for running CentOS 7 with Nginx, Postfix etc, running headless.
Read more
Helpful
Report abuse

Gerard Virgona
4.0 out of 5 stars Great for learning
Reviewed in Australia on 23 May 2019
Verified Purchase
Great little computer that I'm now using for streaming video to my tv. I've even ended up buying one for a friend & another to learn programming on. I figured at the price they go for even if I bugger it uo I've not lost much.
Read more
Helpful
Report abuse

Darren Tummon
5.0 out of 5 stars A great way to make a smart TV
Reviewed in Australia on 14 December 2019
Verified Purchase
Currently I'm using this Raspberry Pi 3 B+ running LibreELEC OS to run Kodi media server. Works well and no real complaints. And relatively robust as I work DIDO and this piece of electronics moves all over the country side with me. :-)
Read more
Helpful
Report abuse
See all reviews
Get FREE delivery with Amazon Prime
Prime members enjoy FREE Delivery and exclusive access to movies, TV shows, music, Kindle e-books, Twitch Prime, and more.
> Get Started
Back to top
Get to Know Us
Make Money with Us
Let Us Help You
And don't forget:
© 1996-2021, Amazon.com, Inc. or its affiliates